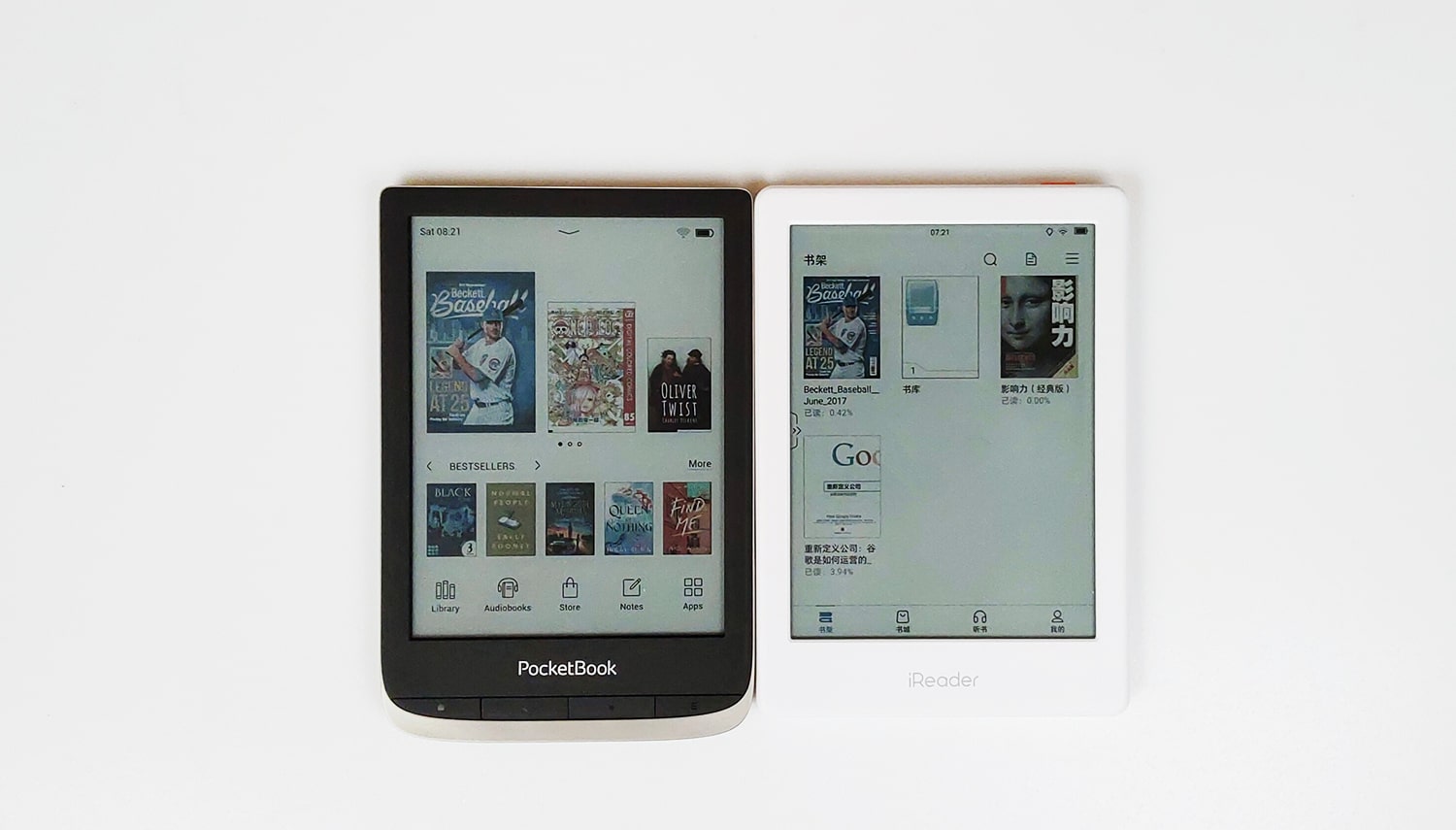 There are only two e-readers currently available that have modern color E INK panels. They are the iReader C6, which is primarily available in China and the Pocketbook Color. These two devices offer vastly different experiences for users. Which one is better?

The iReader C6 features a six inch capacitive touchscreen display a resolution of 1448 × 1072 and 300 PPI.It has a front-lit display system with 24 LED lights, some are white and others are blue. Underneath the hood is a quad-core high-speed processor, 1GB of RAM and 16GB of internal storage. It has integrated speakers, which is useful for text to speech and listening to audiobooks or music. If you prefer to plugin a pair of wireless headphones, it does have Bluetooth 4.1. The WIFI internet access is primarily used to access Baidu services or to purchase ebooks. It weighs 150 grams, is 6.9 millimeters thick, is light and comfortable, and can be held with one hand. It is powered by a 2,000 mAh battery.

The Pocketbook Color has a 6 inch capacitive touchscreen display with a resolution of 1072 × 1448 with 300 PPI. The device has a front-lit display with 16 white LED lights, this is primarily used to read at night or low light environments. The front-lit system is superior to the iReader, because it only has white LED lights, the iReader has blue ones, so you get softer light.

Underneath the hood is a Dual Core 1GZ processor, 1GB of RAM and 16GB of internal storage. Pocketbook is one of those brands that always include an SD card, while most other companies have abandoned them. The SD is on the bottom of the e-reader and supports up to 32GB. It has a Micro USB port to charge your device, it also comes with a Micro USB to 3.5mm headphone jack to listen to music or audiobooks, or just read your ebooks aloud via TTS. It also has Bluetooth 5.1 for wireless headphones and is powered by a respectable 1900 mAh battery. The dimensions are 161.3 × 108 × 8 mm and weighs 160g.

This is a closeup image of both of these e-readers. They both have 300 PPI and 4k colors. Color content is displayed at 100 PPI, which is what you see above. These are both PDF files, of the same baseball grading guide we have been using for all of our reviews.

Pocketbook has a dedicated app that allows you to draw in color, either with your finger or a capacitive stylus, they have 30 different coloring books to draw. iReader is primarily a Chinese device, so everything is tied into Baidu and other apps. You cannot sideload in your own apps.

In this comparison video we take a look at the UI, reading experience, comics, PDF files and a tour of the e-readers. If you want to buy these e-readers, the Pocketbook Color is available now for $219 and the iReader C6 retails for $329.