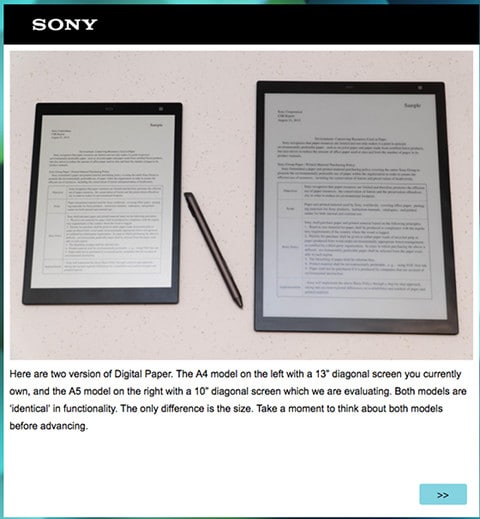 Sony discontinued the Digital Paper PDF Reader about five months ago and the company has been working on a successor. Sony Japan has been spearheading the design efforts and the Sony DPT team in the United States has offered feedback on what their business customers need. Sony recently sent out a survey to a select number of users and they have revealed a new A4 model 13.3 inch e-reader and a A5 model with a 10 inch screen.

There is no indication that the hardware displayed in the picture above are the final production models. There are no home buttons or back buttons, which means that Sony is either forgoing buttons altogether in the new model or they simply have not been added yet. I would not be surprised if Sony decided to just rely on the touchscreen and created a new software driven UI in order to navigate around the device.  This would follow the greater trend of the e-reader industry as a whole, to scrap buttons altogether.

The Sony DPT team in the United States has received a ton of feedback from the entertainment industry, law firms and companies that do a lot of work outdoors. The second generation model will likely have Bluetooth for accessories and a wider array of pen options to take drawing to a whole new level.

Would a 10 inch Sony Digital Paper PDF editor and reader be compelling? It would certainly be more affordable than the 13.3 inch model. It remains to be seen if Sony will release a single DPT device this year or if they will release two different screen sizes.