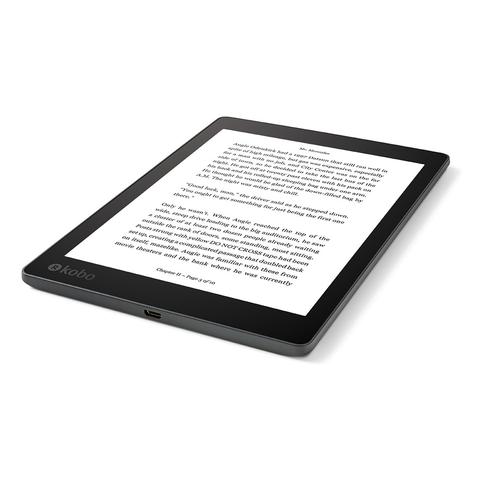 Kobo has officially announced the Aura One e-reader today. The company has announced that it will retail for $249.99 in Canada and will be available to purchase on the main Kobo website and also Chapters/Indigo from August 30th to September 29th (pre-order from August 30 to September 5; September 6 in-store availability); the device will be available at Best Buy beginning September 30th; and as of September 6th in the US, the UK, Italy, France, the Netherlands, Germany, Spain, Belgium, Japan, and Turkey; October/November in Australia, New Zealand and Mexico; and March 2017 in Brazil.

The Kobo Aura One features a 7.8 E-Ink Carta 2 display with a resolution of 1872 x 1404 and 300 PPI. It has the same pixel density as other flagship e-readers on the market, such as the Kindle Oasis. I like the fact the new Kobo screen is flush with the bezel, instead of being sunken. Why is a flush screen important? Normally when an e-reader has a front-lit display the LED lights tend to bleed less, giving the user a better experience.

Underneath the hood is a 1 GHZ processor, 512 MB of RAM and 8 GB of internal storage. There is no mention of an SD card to expand the memory further, but lately Kobo has been employing an internal SD card on the circuit board that powers the operating system.

The e-reader is waterproof, so this is the second model that you will be able to read anywhere. The first e-reader to be waterproof by Kobo was the H20, which came out in 2014.

I predicted in May that any new Kobo product will have a customized Overdrive app built into it, to make borrowing e-books from the library possible. I am happy to report that when the Aura One is released it will have an optimized e-ink app from Overdrive.

My review unit for the Kobo Aura One arrives today and Good e-Reader will be filming a series of video reviews and comparisons in the coming weeks.