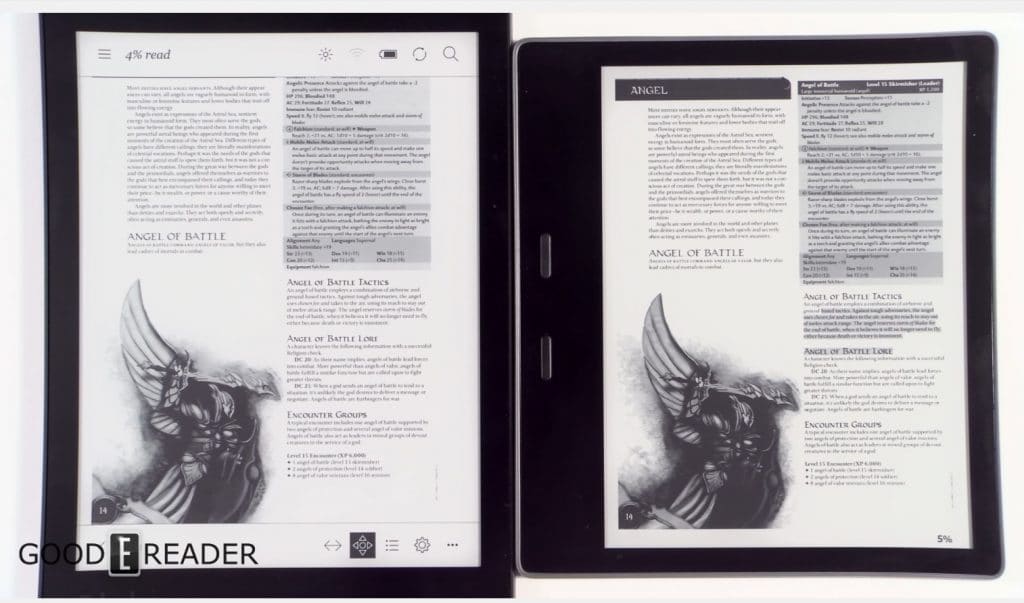 The Amazon Kindle Oasis and Kobo Aura One are two of the world’s most popular premium e-readers. They both feature large screens and are waterproof. Many people are wondering what device is the better buy and today we address this in our official comparison video.

I noticed that Amazon is using a different front-lit display system on the new Oasis. The first generation Oasis, Voyage and Paperwhite 3 are all using the same lighting system. The new Oasis is using a different LED lights. This results in a brighter, whiter screen that has crisp text. When we compared the Oasis side by against against older e-readers you can really see the difference.

The Kindle Oasis has a IPX8 rating which means it can stay completely submerged in two meters of freshwater for up to sixty minutes. The e-Reader utilizes a brand new dual-core 1GHz processor with 512MB of RAM and this results in an e-reader that is tremendously robust. Navigating the menus, library or accessing the store is lightning quick. It is very likely that Amazon has made some software enhancements in conjunction with hardware upgrades. You can play audiobooks from Audible via Bluetooth.

The front-lit display on the Aura One is a tour de force. There are a bunch of small LED lights that project light upwards, proving even distribution. There is no cloudy areas when you turn the lighting system down to 50% and the only product that does it slightly better is the Amazon Kindle Oasis. Unlike every other e-reader on the market, Kobo is using RGB lights, instead of white bulbs.

Underneath the hood is a Freescale 1GHz processor and 512MB of RAM, the same as you get with most new Kindles. There is 8GB of internal storage and there is no publicly available SD card. Instead, the SD card is grafted to the circuit board and powers the Linux operating system.. There is no easy way to remove the back platting, because of the waterproof design.

In this comparison video we take a look at the UI, software, ebook experience, shopping, frontlite and PDF experience.