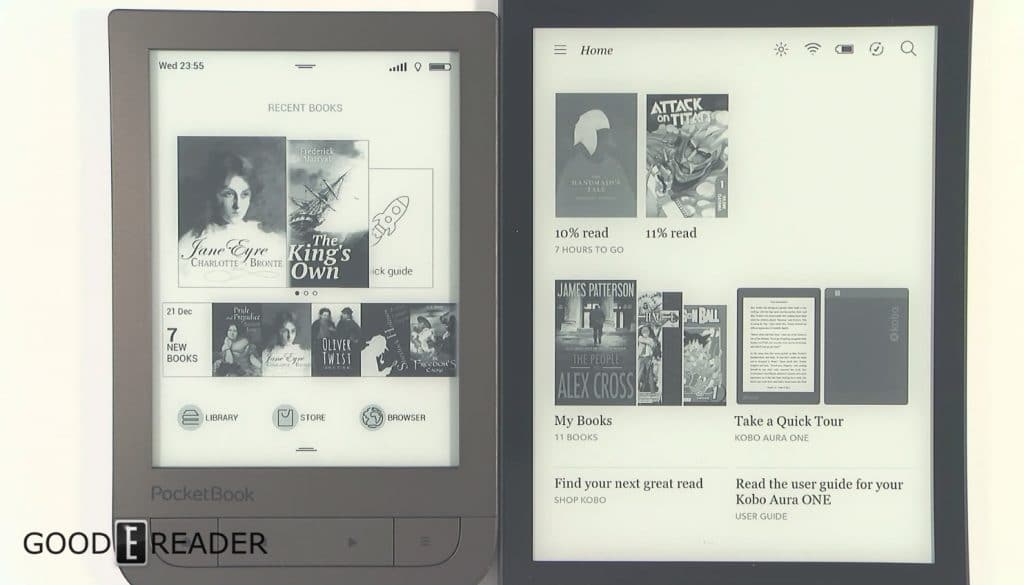 Kobo and Pocketbook both have new e-readers that have a warm comfortlight that allows you to mute the screen and eliminate bluelight. The Kobo has a larger screen and is waterproof, whereas the Pocketbook has audio via a 3.5mm headphone jack.

The Kobo Aura One features the largest E-Ink screen that Kobo has ever produced. It is 7.8 inches and the resolution is 1872 by 1404, which works out to a crisp 300 pixels per inch. The screen is completely flush with the bezel, which gives you a wider area to turn pages in e-books or pinch and zoom PDF files. It has 32GB of storage and one of the largest digital bookstores in the world, not to mention Overdrive and Pocket integration.

The Pocketbook Touch HD 2 features a six inch E Ink Carta display with a resolution of 1440X1080 and 300 PPI. It uses a IR sensor, which is the same screen tech the new Nook Glowlight 3 utilizes. Underneath the hood is a 1GHZ processor, 512MB of RAM and 8GB of internal storage. There is a MicroSD card to enhance the storage up to 32GB. You will be read for around a month on this device without having to recharge, thanks to the 1500 mAh battery. The Pocketbook supports more fonts and e-book formats than the Kobo, but does not have a dedicated bookstore. You must sideload in your own content. What I like about the Pocketbook is that it has audio and physical page turn buttons.