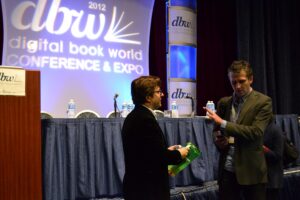 Kobo executive Michael Tamblyn was at Digital Book World speaking about the importance of ebook pricing to authors and publishers, as well as participating in a panel discussion on global adoption. He took a few moments to speak with GoodEReader about some issues facing the company as a whole.

The following video interview gives Tamblyn an opportunity to focus on some major issues, such as the recent expansion into the Netherlands and the deal with Rakuten. He touched on the possibility of Kobo reaching out to further Asian markets, as well as paid great attention to the viability of their self-publishing platform becoming a major distributor, especially in some untapped markets like Africa and South Asia.