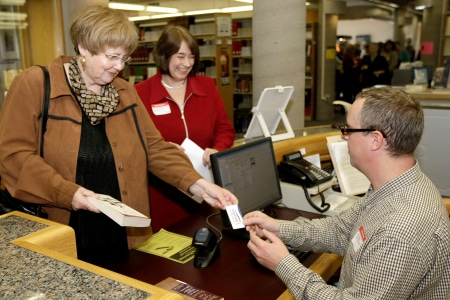 There is a very strong connotation among publishers that library patrons are freeloaders and giving a book away devalues the product. A recent survey conducted by Overdrive and the American Library Association’s Office seeks to dispel this notion.

An extensive online poll was conducted with over 75,000 library ebook readers and it found that these patrons purchase an average of 3.2 books (both print and ebooks) each month. A majority of library patrons consider purchasing books discovered on a library website. These ebook borrowers also report that their digital content purchases have increased in the past six months.

The study confirms 57% of people use libraries as content discovery engines. Patrons often will see a book and will end up making the digital purchase. 53% of all people surveyed have thought about buying an ebook listed on their library’s website and 53% both borrow ebooks and buy them. A small segment of the population (35%) have also purchased the ebook after they have read the free edition from the library, to add it to their own personal collection.

So who uses the digital library the most? There is no surprises that females are leading the charge with over 78% of all respondents borrowing digital books. The strong majority are between the ages of 40-65 (55%) and most are fairly well educated (74%).

The survey also found that dedicated ebook reading devices—including Kindle, Sony Reader and Nook—were the devices most used to read ebooks from the library (84%). Desktop or laptop PCs (20%), smartphones (19%), and tablets (18%) rounded out the top four types, which reflects the rapidly escalating trend of borrowing on mobile devices recently reported by OverDrive. (In August, mobile devices accounted for 30% of checkouts and 34% of web traffic at OverDrive-powered library websites. Both statistics are up nearly 100% year over year.)

“Book discovery and promotion have taken on greater importance for publishers and authors as the shift to digital continues, and this survey confirms the value of public libraries,” said David Burleigh, OverDrive director of marketing.  “With rising web traffic and enhancements to library websites (see YouTube preview), public libraries are becoming an essential part of the marketing strategy for publishers.”