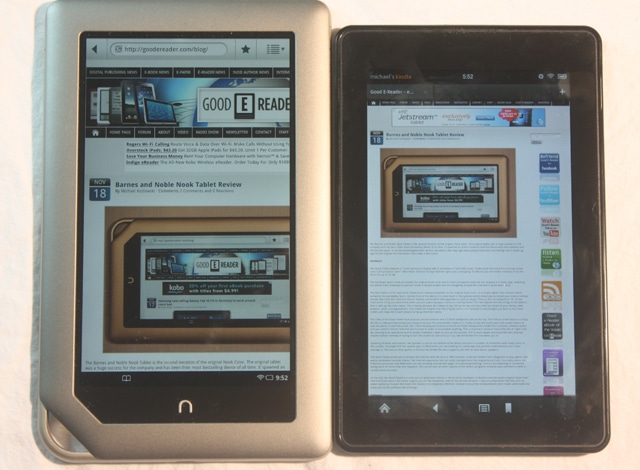 Welcome to another Good e-Reader Video! Today we evaluate the key differences between the latest devices to hit the market, the Amazon Kindle Fire and Barnes and Noble Nook Tablet.

Some of the main differences between these two devices are on the hardware spectrum and the Nook Tablet edges out the Kindle Fire in a few areas. Both devices have a Dual-Core 1GHZ CPU processor and have a 7 inch display screen with a resolution of 1024×600 pixels. The Fire has Gorilla glass as the main display which has a more durable and longer lasting lifespan which is fairly important when you put it in the hands of kids. The Fire has 512 MB of RAM while the Nook Tablet has 1 GB. Storage space is a big issue with the Fire only having 8 GB while the Nook has 16 GB. The good thing with the Nook tablet is that you can further increase the memory up to 32 GB via the Micro SD Card.

One of the big differences about these two devices is that the Nook has more physical buttons all over it which make it easier to use. There are volume buttons which is fairly important if you are listening to music with the screen off. The Kindle Fire makes you have to interact with the touchscreen in order to change the audio levels. I also am a big fan of the N button which brings up the main menu.

The first thing users will see once they are past the initial setup of the device is the home-screen. The Kindle Fire has a very visually appealing 3D slideshow panaramic viewing of your most recent apps, books, wesites and other content. The drawback is that you have no control over this screen and despite the fact it is Android, you would never know it due to  your lack of control. The Nook on the other hand gives you the ability to drag and drop apps, books, and other content right on your homescreen. You can also scroll to alternative screens and customize them.

Both ecosystems are fairly different with Amazon offering more apps and video content while the Nook relies heavily on kids books, magazines and newspapers. You could look at it this way; the Kindle Fire is more of a general purpose tablet while the Nook emphasis is reading.

The libraries and shelving is vastly different with the ability to craft your own shelves and collections with the Nook Tablet. The Kindle Fire does not really allow you to alter the experience drastically but does have a “list” view.

The reading experience is the same on both devices with the ability to switch your background for nighttime reading or to change the bright white to an easier color to deal with. You can change the linespacing, margins, fonts, font size and a myriad of other tools. You can also take notes and highlights and store them in the cloud to sync with your other devices. A neat feature is being able to lookup a word or phrase on Wikipedia or Google Search. I like the Nook Tablet better in the respect on when you are highlighting a word it gives you a little zooming lens above the word. With the Kindle Fire the zooming feature is on the word itself, and your finger is covering it up.

We spend 30 minutes in this video going over every aspect of the device. You can see how the stores visually function differently and how media looks on the screen. We test ebooks and how the experience may vary between the two devices. If you are on the fence about either of these two e-readers, this video will be your guide to the key differences.