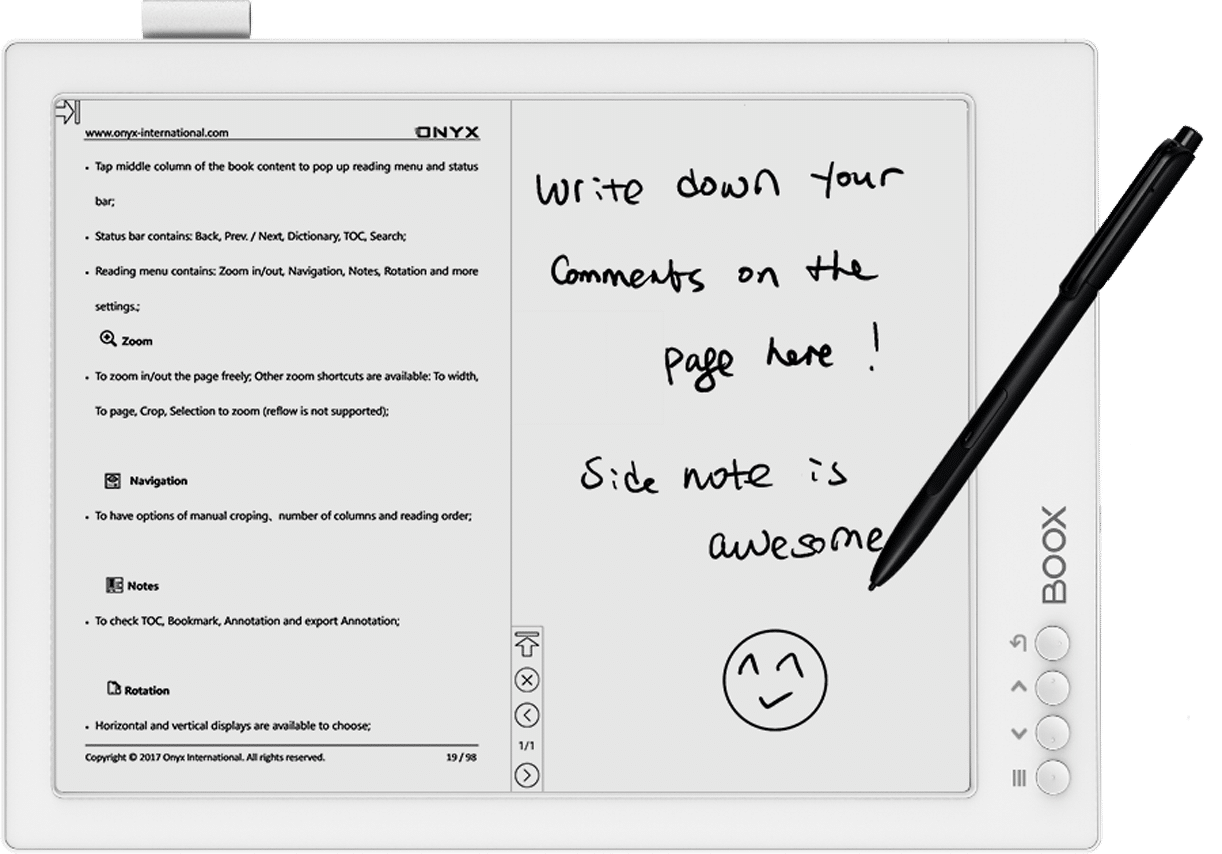 The Onyx Boox MAX 2 PRO is a great e-reader and the giant 13.3 inch screen is great for making notes and editing PDF files with the accompanied stylus. It has handwriting technology that will automatically take your scribbles and convert it into text, which is very useful.

The MAX 2 PRO features a 13.3 inch E Ink Carta and Mobius screen. This is the same technology that Kobo employed in the Forma. Mobius makes the device lighter and protects it better if you drop it, since the screen is basically made of plastic and not glass. The screen is completely sunken and not flush with the bezel. I found that the screen is really reflective for some reason.  The MAX 2 does not have a front-lit display or a color temperature system.  This is not very surprising because none of these devices that are 13.3 inches currently have a lighting system.

The resolution is 2220×1650 and has a PPI of 207. It has a WACOM screen that works with the accompanied stylus.  This is useful of you want to freehand draw, take notes in ebooks or edit PDF files. It also has a capacitive touchscreen display for finger and tap gestures. Underneath the hood is a 1.6 GHZ Quad core CPU,  4GB of RAM and 64GB of internal storage. This is a tremendous upgrade from the regular MAX2 model that has 2GB of RAM and only 32G of internal storage.

The accompanied stylus has 4,096 different degrees of pressure sensitivity, useful for really flexing your drawing muscles.  Although we have not tested it ourselves, the MAX2 is also compatible with official WACOM PENS, and there is noticeably less input lag.

There are a few different pen and pencil types to make the lines thicker or thinner. There is an Ink setting, which is useful for painting a large section of the screen black and then you can switch to a white version of Ink, where can draw inside the the black area with the white pen setting.

If you are making notes on a blank background, you are not stuck with it. There are only a dozen different backgrounds available, such as sheet music and college rules. There is an option to import in your own backgrounds, useful for shopping lists or appointments.

In this Good e-Reader video, Peter demonstrates the full note taking experience with the Onyx Boox MAX 2. This e-reader retails for $849 from the Good e-Reader Store and it ships worldwide.