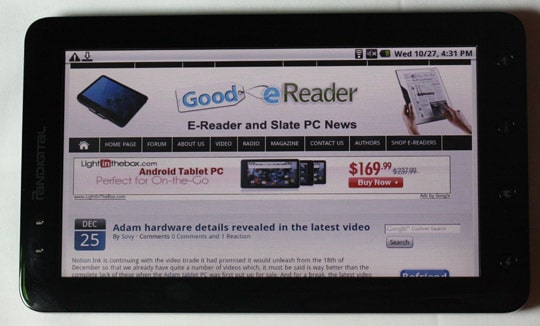 Pandigital was a California based company that has been releasing lower-end tablets for the last four years. The company basically adopted vanilla Android tablets from companies in China and marketed them as its own. Most of its devices had outdated versions of Android and the hardware was kind of pitiful. The company has officially filed for bankruptcy and all of its assets are in currently in liquidation.

Pandigital got off to quite the audacious start with the Novel tablet. It was barely on the market for a few weeks before they initiated a full recall. Within a month the company had released it and alienated the customers who bought into it. The company released a few new devices every year and sold them on Amazon, Future Shop, Best Buy, Costco, Electronics Expo, Kmart, and RadioShack. Really Pandigital survived much longer than they should have, mainly due to retail viability.

Over the years, we petitioned Pandigital many times for interviews with senior management and executives. They constantly shut as down, and never really became involved in media with any other websites. People who purchased any of the tablets over the years are out of luck with warranties, as the company is not honoring them.