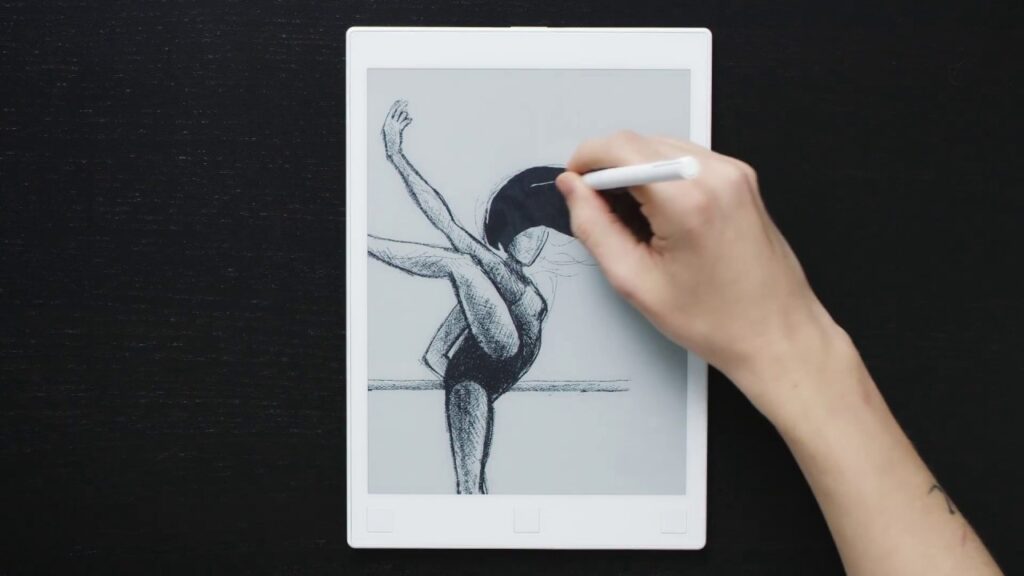 There is no shortage of E INK based digital note taking devices or e-notes that have hit he market in 2020. The vast majority are using glass based displays. This includes the Remarkable 2, Onyx Boox Note Air, Supernote A6X and a myriad of others. Glass makes the screen more durable and a stylus is less likely to scratch the screen. You can also draw edge to edge, since there is no bezel getting in the way. The downsides is glass based displays are heavier and there is less friction, when drawing on the screen. It also adds to the overall cost, which is why these devices are rising in price.

Sunken based displays add lots of grit when you are drawing on the screen. It feels like you are drawing on a piece of sandpaper. This is because you are drawing on a piece of e-paper. The Likebook Mimas, Muses, Sony DPT-RP1, DPT-CP1, Onyx Boox Note, MAX 3, Fujitsu Quaderno A5/A4, Quirklogic Papyr all use sunken displays. The plastic screens provide the best provide the best writing experience, and the devices are more affordable. Although, they do have their downsides.  The display is flexible/soft, which means it is prone to damage. The nibs on the stylus also degrade faster, which means you will have to replace them more often, which adds to cost. Sony got around the degrading issue by releasing felt/graphite nibs, which are longer lasting.

The Remarkable 1 had an exposed e-paper display. When we compared this model against the upgraded Remarkable 2, we found that the overall drawing experience is better on the first generation model. This is because there was more torque, when using the stock or premium stylus. You stylus did suffer from sliding problems, like it did on a glass based display.

Glass based displays on their own, are not that bad. One of the big problems is due to cheap plastic stylus with plastic nibs, that result in the total weight being 2-3 grams.  Plastic nibs, in conjunction with a glass based display means that it stylus is prone to sliding on the screen. Supernote also got around this problem with the A6X and A5 with their new ceramic nibs. Supernote stated that “During countless experiments, we tested high-hardness materials such as stainless steel, nickel-titanium alloys, and finally found the flexural strength of zirconia ceramic 1100 with a hardness of 88–90 HRA (Rockwell hardness), which is close to the hardness of sapphire and is fit as synthetic material for the tip of electromagnetic digital pens. Supernote is a bit of an outlier, they use a glass screen, but have a self-healing film installed on top of the glass, this in conjunction with the new nibs, actually add a huge degree of stroke resistance for optimal accuracy.

Some of the best pens are designed by specific companies, for specific products, but really make writing on a glass based display, amazing. The iReader X-Pen has an aluminum core construction and weighs 15 grams. The Supernote Heart of Metal stylus is comprised of a pure aluminum body and weighs close to 25g. The Marker Plus for the Remarkable 2, is made of plastic, but they added heft to it,  and added grip to it, so it is easy to hold.

Glass based displays on e-notes, and also tablets, such as the iPad, has created an alternative market for different types of screen protectors, that add friction. Paperlike released a new type of screen protector made of optimized Nanodots, it provides maximum paper-feel and minimal tip consumption. Matte screen protectors are also very useful, on E INK based e-notes, especially if you draw outdoors or in rooms with lots of overhead lighting, this is because the glass reflects light, while the E INK layer absorbs it. A matte screen protector helps with the lighting issue and also provides more torque than writing on a glass screen alone. Cheap screen protectors that come for free with a number of E INK based E-Notes sometimes feel like you are writing on a piece of vinyl.

E INK based e-notes these days are made of glass, you can’t really buy new devices that have a sunken based display with an exposed screen. Most of the older devices are 1-3 years old and are using outdated hardware and lower versions of Android,  and not even supported with firmware updates anymore. I still believe that the Sony Digital Paper DP1-RP1 is the best digital note taking device ever and it still sells well, and it is over 4 years old.

I know lots of people who love drawing on a glass based display, whether it is with an Apple Pencil 2 on an iPad Pro or the Remarkable 2. Others like drawing on real e-paper. There are pros and cons of each type of technology and little things that you can change about the overall experience, from different styli to screen protectors. What type of screen do you like drawing on?