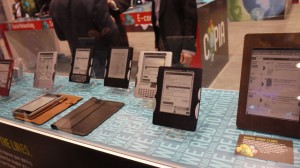 When Amazon created its own traditional publishing house in late spring 2011, a lot of eyebrows went up. As if it wasn’t bad enough that the retailer was taking over the industry with its fast shipping of content via its online marketplace, as well as becoming a game changer with Kindle Direct Publishing and CreateSpace self-publishing divisions, now the giant was taking on becoming a typical submission-based publisher and wooing some major name authors away from their publishers.

Now, Barnes&Noble has issued a statement to select news outlets that it will not stock any Amazon Publishing titles in its physical stores. Amazon forged a partnership with Houghton Mifflin Harcourt’s new imprint, and B&N has also said that no titles from that venture under the New Harvest imprint will be sold in the brick-and-mortar B&Ns.

Laura Hazard Owen from paidContent.org had this statement posted in her article, purportedly attributed to Jaime Carey, Chief Merchandising Officer, from Barnes&Noble:

“Barnes & Noble has made a decision not to stock Amazon published titles in our store showrooms. Our decision is based on Amazon’s continued push for exclusivity with publishers, agents and the authors they represent. These exclusives have prohibited us from offering certain eBooks to our customers. Their actions have undermined the industry as a whole and have prevented millions of customers from having access to content. It’s clear to us that Amazon has proven they would not be a good publishing partner to Barnes & Noble as they continue to pull content off the market for their own self interest. We don’t get many requests for Amazon titles, but If customers wish to buy Amazon titles from us, we will make them available only online at bn.com.”

Hazard Owen goes on to explain that B&N will step back from this mandate on the condition that Amazon allow B&N to sell ebook titles that Amazon is currently holding on to exclusively. There was a similar tension over the summer when B&N pulled various graphic novel titles from its shelves after those titles were being released as ebook versions strictly to the Kindle Fire; B&N at that time had said they would not stock any book in their stores that their customers could not order online, and it seems as though they are holding to that promise.