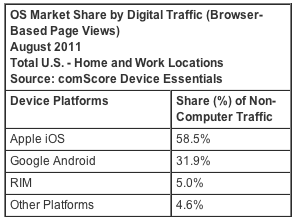 It is no surprise that the Apple iPad is the leading tablet device and many others are left out in the cold. A recent study by comStore announced that the iPad leads all internet traffic by mobile devices, including the iPhone.

During June to August this year the iPad continued to dominate web based traffic for mobile devices. Many competitors have tried to take on the tablet and in most cases of failed to make a dent in the overall market share. Many entry level competitors use WIFI only instead of 3G where most of the data occurs. The study was internet based traffic based on both WIFI and 3G connections.

If you look at the industry as a whole Apple leads the pack with controlling 43.1% of the entire mobile sector and Android rolling in at 34%. Traffic wise, iOS has 58.5% of the entire internet market with its family of devices.