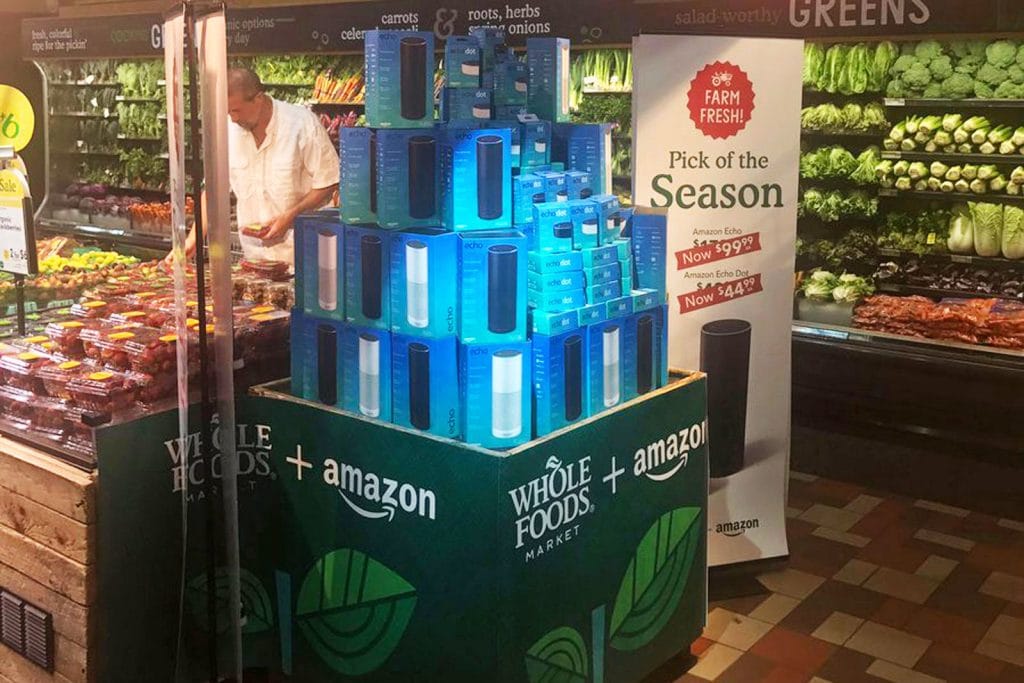 Amazon has a number of new initiatives in the works. They will be announcing new Kindle e-readers within the next few weeks and they are now selling Echo speakers at Wholefoods. There is also a number of essential stories that you need to know about your favorite Seattle company.

Whole Foods – Amazon closed their Whole Foods acquisition on Monday and they have not wasted anytime on trying to hawk the Echo and Echo Dot. They’re “farm fresh,” according to the displays — as if you’d find them growing in a field next to the carrots. You will be paying the same price in the stores as you would online.  It costs $100 for the regular model, and $45 for the Dot.

Amazon Dominates Seattle – Amazon now occupies 19% of all prime office space in the city, the most for any employer in a major US city, according to an analysis conducted for The Seattle Times. The swarms of young workers crowding into South Lake Union every morning represent an urban campus that is unparalleled in the United States.  Amazon now occupies more office space than the next 40 biggest employers in the city combined. Apparently this is only the beginning: Amazon’s 8.1 million square feet in Seattle is expected to soar to more than 12 million square feet within five years.

Sonos Developing Alexa powered speaker –  Sonos has filed for FCC approval for a new smart speaker  with voice controls. It’s possible the speaker could compete with products such as the Amazon Echo, Google Home and the upcoming Apple HomePod, though early rumors have suggested that the new Sonos will pack Amazon’s Alexa assistant.

The Amazon Ad Business – Agency execs say Amazon is opening up and evolving self-service for Amazon Media Group, its advertising arm that works similarly to programmatic advertising to serve ads to people off Amazon.com. “What they’re doing now is opening as a self-service platform to agencies, letting us manage those campaigns,” said one exec, where previously agencies had to go through Amazon’s own manager services.  The second executive also said the company has made widely available an application programming interface for sponsored product ads, increasing the efficiency of bids on the platform, and that similar developments are expected for the AMS platform in the near future.

Amazon Music Unlimited Student Discount –  The online retail giant is offering up its relatively new music streaming service to all the young folk for just $4.99 per month. That’s less than the $7.99 per month that Amazon charges its Prime Subscribers or the $9.99 per month for non-Prime customers. This deal is only available for students in the United States.

Deals on PC Gear –  In celebration of PAX West 2017, Amazon just launched a big limited time sale on all sorts of PC gaming gear. From insanely precise mice and backlit mechanical keyboards to headsets, routers graphics cards and everything in between, Amazon has anything and everything you might need. Prices on all the gear in question have already been discounted in typical Amazon fashion, but the promotional code PAXWEST20 will save you an extra 20% on all of the items included in the sale

Ectaco now distributing e-Readers on Amazon – Ectaco used to design and manufacture their own e-readers back in the day. They were the first company to employ color e-ink in their products, although the lacklustre hardware prevented it from going mainstream. Over the course of the past few years they suspended their own hardware and focused on language translators. In order to stay in business they have leveraged their relationship with Onyx and have become their new North American distributor.

New Kindles? – Amazon plans on releasing at least one new e-reader this year. This revelation stems from a recent E Ink Holdings financial report. They proclaim that in the next two quarters their revenues will increase due to an order from Amazon. The big rumor right now is a second generation Oasis and a new Paperwhite.

Echo gets Multi-room Audio – Starting today, Amazon Echo owners can use multi-room audio on their devices. This feature enables Echo, Echo Dot, and Echo Show owners to synchronize their music playback across multiple devices in different rooms. Also announced today is Amazon’s Connected Speaker APIs, which will let you use Alexa to control connected audio systems. Amazon is working with companies like Sonos, Bose, Sound United, and Samsung on this feature.