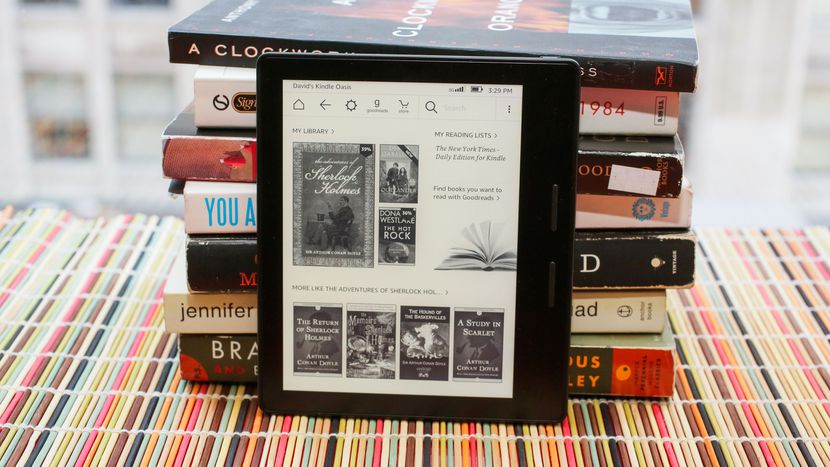 Good e-Reader reviews every single e-ink device in the world and we know a thing or two about digital reading and hardware. This year a ton of new e-readers have been announced or have been on sale for a number of weeks. If you are looking to purchase a new device in the next few months or to give as a gift to a loved one, this is the definitive video for you.

The all new Kindle Oasis features a 7 inch capacitive touchscreen display with resolution of 1680 x 1264 and 300 PPI. It includes includes 12 LEDs for uniform lighting across the screen and allows you to read in the dark. The Kindle Voyage was the first Kindle with an ambient light sensors that adjusts the brightness as you move from room to room, or from outdoors to indoors and the all new Oasis has the same functionality. This is the first waterproof Kindle ever released and it carries a IPX8 rating, which means you can use it in the bathtub or the beach.

The new Kindle Oasis has audiobook functionality and you can buy them a new audiobook section from the Amazon bookstore. It does not have a 3.5mm headphone jack or a speaker, but it does have Bluetooth. You can hook up your favorite pair of wireless headphones or an external speakers.

The Kobo Aura One features the largest E-Ink screen that Kobo has ever produced. It is 7.8 inches and the resolution is 1872 by 1404, which works out to a crisp 300 pixels per inch. The screen is completely flush with the bezel, which gives you a wider area to turn pages in e-books or pinch and zoom PDF files.

The front-lit display has 17 LED lights that project light upwards, proving even distribution. There is no cloudy areas when you turn the lighting system down to 50% and the only product that does it slightly better is the Amazon Kindle Oasis. Unlike every other e-reader on the market, Kobo is using RGB lights, instead of white bulbs. This gives you a comfortlight system that mutes the bright white screen.

Underneath the hood is a Freescale 1GHz processor and 512MB of RAM, the same as you get with most new Kindles. There is 8GB of internal storage and there is no publicly available SD card. Instead, the SD card is grafted to the circuit board and powers the Linux operating system.. There is no easy way to remove the back platting, because of the waterproof design.

This device is waterproof and is the only e-reader in the world that has Overdrive functionality. You can browse, borrow and read right on the Aura One, instead of having to use Adobe Digital Editions.

The DPT-RP1 features a 13.3 inch E-Ink Carta screen with a resolution of 2200 x 1650 and 207 PPI.  The screen is completely flush with the bezel and not only does this make the device have a premium feel, it also provides a ton of benefits. You can easily employ the stylus to take notes from one edge of the screen to the other, whereas the original Digital Paper had a sunken screen and was more challenging to do this

Underneath the hood is a Marvell IAP140 64-bit Quad-core IoT Applications Processor and ARM Cortex-A53 CPU, up to 1.2GHz, and has a separate power low-power Cortex M3. It has 1GB of RAM and 16GB of internal memory, but when you power it on the first time, there is 11 GB. The rest is reserved for the Google Android operating system and some of the stock PDF templates that are available.

This device has a lot of cool features going for it. You can initiate a split screen mode where you can do anything. I like being able to have a PDF open on one side and on the other the note taking app. I also liked how quick and robust the drawing experience is.

The Remarkable 10.3 inch-writing tablet is appealing for consumers who want an extensive note taking experience and want to read e-books. This is the first product made by Remarkable and it is a very compelling first offering. They begun to take pre-orders last year, sold over 36,000 devices, and raised over $17 million. I believe that this is the best device of its kind currently on the market and trounces the competition.

The Remarkable Writing Tablet features a 10.3-inch Canvas display and utilizes E-Ink Carta. The screen has a capacitive touchscreen and you can interact with most elements with your finger or the accompanied stylus.  The note taking experience has palm rejection technology, which means you can easily rest your palm on it. The screen is completely flush with the bezel and the resolution is 1872×1404 with 226 PPI.

Underneath the hood is a 1GHZ Arm A8 CPU processor and 512MB of RAM. You have 8GB of internal storage and there is no SD card. The Remarkable has Wi-Fi that is primarily uses to fetch firmware updates and to synchronize your notes on a local network. This device does not have an internet browser or any other way to connect to websites.

I like how this device reads PDF and EPUB books. The drawing experience is really solid, it has tons of advanced options. The screen has palm rejection technology and the stylus has over 1,000 degrees of pressure sensitivity – the harder you press, the thicker the lines become.

The Tolino EPOS e-reader  features a 7.8 inch capacitive touchscreen display with a resolution of 1872 × 1404 with 300 PPI. This is the first Tolino branded product that is larger than six inches and should be a boon for anyone who needs extra screen real estate to read ebooks.

Underneath the hood is a Freescale i.MX6 1GHZ processor, 512MB of RAM and 8GB of internal storage. You will get around three weeks of usage via the 1200 mAh battery. The Tolino Vision series of e-readers have consistently been waterproof and this is the first model of a new series that you can also read in the bathtub or take the beach.

The Icarus XL HD features a 7.8 inch E INk Carta display with Regal Waveform. The resolution is 1404×1872 and 300 PPI. Underneath the hood is a 1.8 GHZ processor, 1GB of RAM and 16GB of internal storage.  It also has a 3.5mm headphone jack that you can use to plug in a pair of headphones or speakers.

The Icarus is bundled with a number of fonts to get you reading right away, including the Amazon Bookerly font. Reading is really good with the stock app, but likely you will want to download your favorite such as KOREADER, Kindle, Kobo, Nook, Moon+ Reader or any other e-reading app you want. This device is running Android 4.2.

Bookeen Saga/Nolim – I really like the overall design of this new e-reader and Bookeen won a few awards. I think this device is really put together well and is super stylish.