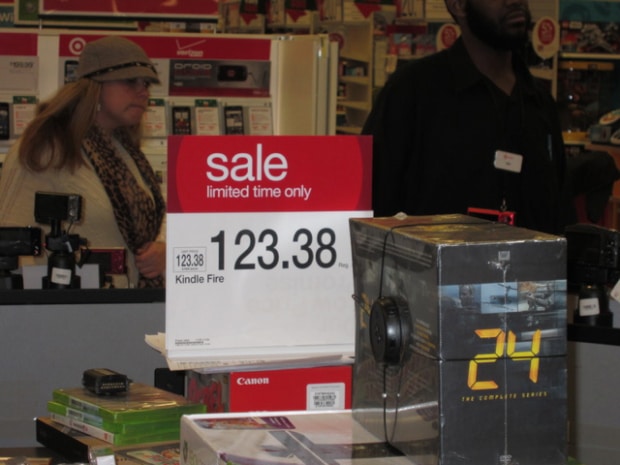 A few months ago Target decided against carrying Amazon e-readers and tablets because of the superstore’s growing relationship with Apple. Today Walmart has announced that it will cease to order new shipments of Amazon Kindle devices across the entire company, but will continue to sell them until the existing stock is depleted.

“We have recently made the business decision to not carry Amazon tablets and e-readers beyond our existing inventory and purchase commitments,” Wal-Mart said in a memo sent to store managers on Wednesday. “This includes all Amazon Kindle models current and recently announced.”

A Wal-Mart spokeswoman confirmed the decision and said the company would continue to sell “a broad assortment” of other tablets, e-readers, and accessories. Amazon declined to comment. This broad assortment of devices includes tablets and e-readers from Barnes and Noble, Sony, Apple, and more.

Amazon is betting on its latest generation of devices to function like cash registers, where the hardware is severely discounted and makes up for the difference with Amazon Prime, ebooks, videos, apps, and a wide array of content. Walmart does not make any money or commissions based on digital purchases and likely it will never come out on the exact reason why Walmart decided against carrying Amazon products.

If you were to ask me I would say that Amazon is quickly sparking diminishing sales with the traditional big box stores by offering free shipping for Amazon Prime members and more people prefer to shop with Amazon for devices in the USA than a Walmart. In order for Walmart to continue to gain strength, it has to axe the competition from its stores. In essence, both Target and Walmart sees Amazon as a competitor to their core business.