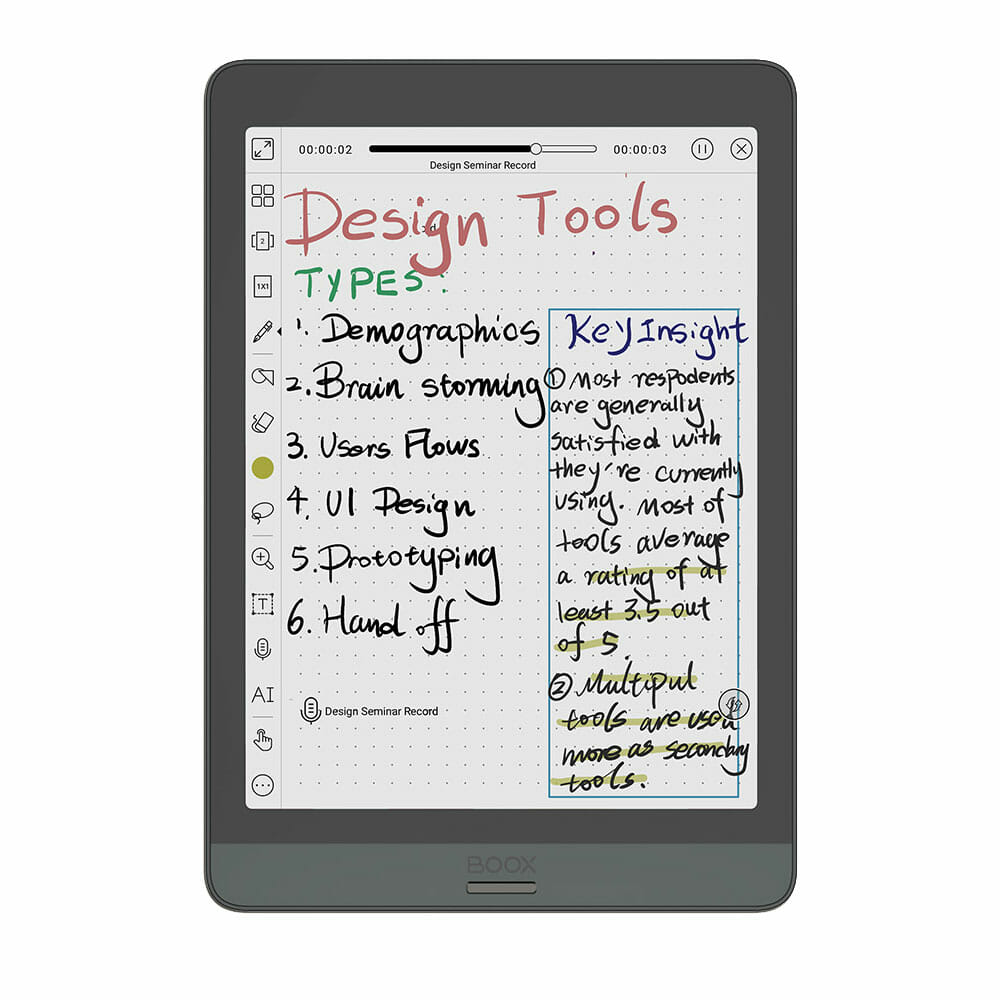 E INK has been getting serious about color e-paper for the past few years with the advent of Kaleido color e-paper last year. The second-generation film came out in early 2021 and there have only been a few devices that are in English. The Pocketbook Color and Onyx Boox Nova Color were basically the only English products that used the first gen Kaleido, and both had 6-inch screens. Inkpad Color and Onyx Boox Nova 3 Color used the second gen film and had slightly larger 7.8-inch screens. The only real color innovation this year did not even come from E INK, but a technology called DES Slurry, it is currently being used on the Reinkstone R1 and Topjoy Butterfly.  Both devices have completed the crowdfunding process, but they don’t really have any retail visibility.

All of the big new products of the year are still using black and white displays, this includes digital note taking slates, such as the Onyx Boox Max Lumi 2, Note Air 2, Note 5, Remarkable 2, Boyue Likebook P10W, Kobo Elipsa and the second-generation Fujitsu Quaderno A5 and A4. The only large screen color device that we saw in person, was the new DPT-RP1 Color, but Sony is in the business of white labeling and won’t release this model themselves. They are trying to convince others to take it to market, but so far, it has not happened yet.

We did not really see any color offerings from any of the established companies, that have been in the e-reader business for a long time. The 11th generation Kindle Paperwhite 5 and Signature edition, Kobo Sage, Kobo Libra 2, and the Tolino Vision 6, are all using the latest E INK Carta 1200 screens, that dramatically increase performance, but many people are still clamoring for color screens.

So, in the English market, there are basically Onyx and Pocketbook that release a new product, for each generation of color e-paper, but things are quite different in China. The market is firmly embracing the technology and is being sold to schools, businesses and to a lesser degree, the average technophile. There have been tons of color e-paper products, from Goyue, Bigme, iReader, iFlytek, and a series of smartphones from Hisense. I think the main reason they are successful there, is the population, which means more customers and two, you can hit all sorts of price points with basic color readers and more expensive e-notes.

There is certainly a demand in North America, Europe and even Australia for writing on color devices. Most people turn to the iPads with Apple pencil support. In practice, this turns a multipurpose tablet, into a writing tool. In reality, there are only certain apps that are available that let you use the Apple Pencil, in all of its glory, and these are few and far between. E INK and WACOM screens can draw basically on PDF files, ebooks, and their dedicating writing apps, it is more fluid and seamless. Not to mention the primary benefits of E INK tech, is that it is the closest you can get to writing on a real piece of paper, while still being tremendously easy on the eyes and having long battery life. Basically, if you want a large screen, color writing tool, you basically have no choice than to buy an iPad.

So why hasn’t any English large screen color e-notes or e-readers been released at all over the past few years? I think there are a few things holding it back. The resolution is critical, Kaleido 1 and Kaliedo 2 could only display around 100 PPI for color. On smaller devices, this is not a problem, for larger devices, it looks crappy. The color filter array is always on, there is no way to shut it off. So, if you just want to switch to black and white, to get high resolution for a book or PDF, you can’t do it, the CFA is always on, so white gets turned into grey, and sharp black text, ends up looking cloudy. The only redeeming aspect of Kaleido is being able to draw in color, it is the saving grace.

I hope that E INK does some serious upgrades for the 3rd generation Kaleido, which was supposed to be released in the summer of 2021, but is likely pushed back into next year sometime. I think it is critical to allow companies the option to control the CFA ON/OFF state with software, so they can optimize their larger screen devices. I also, hope they increase the resolution, latency and could display more colors.