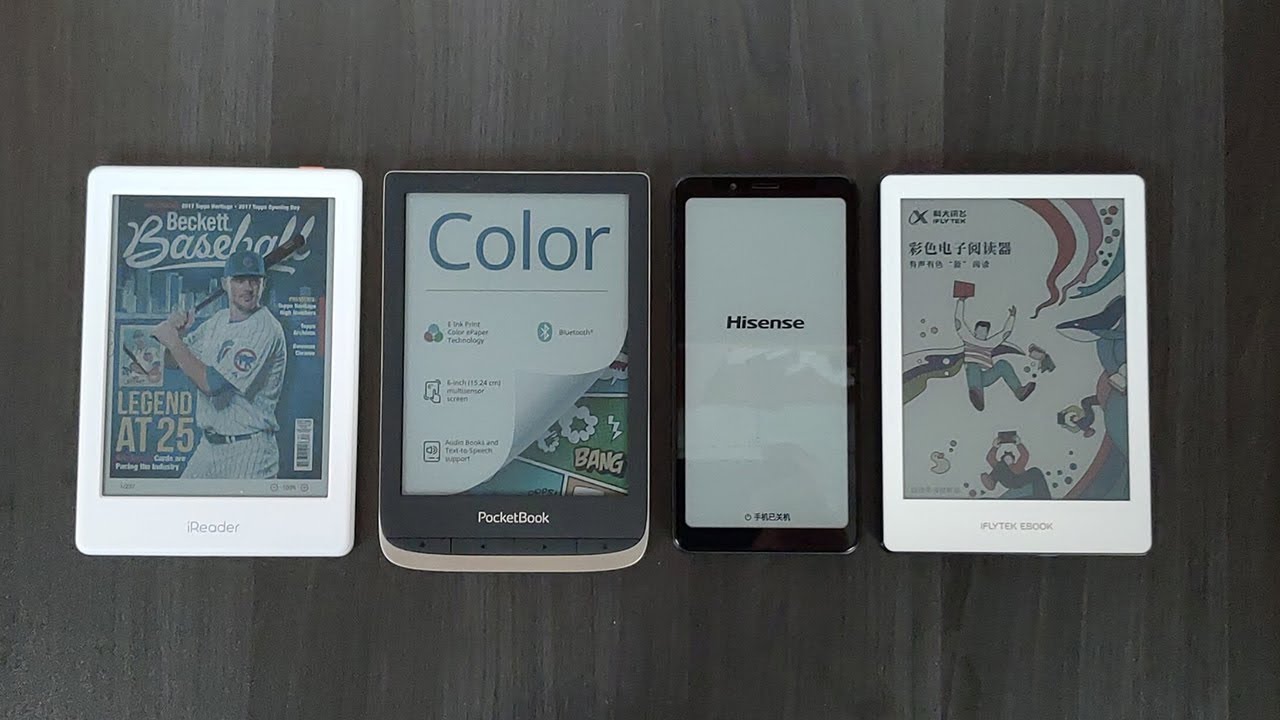 Within the past 12 months there has been a resurgence in color e-readers. This is primarily attributed to E INK developing e-paper called Kaleido and many brands have released devices that are geared towards reading ebooks, e-notes and also smartphones. The vast majority of releases were aimed at the Chinese market, but only a few were appealed to a wider, international audience.

Kaleido e-paper can produce color for each pixel that is displayed on the screen. This includes red, green, blue, black or white. Colors can be combined to give you different colors or shades. The way it works is if you want light blue, blue will be toned down and white will be brighter. If you want orange, then yellow and red would be blended. It will ultimately display over 4,096 different color combinations at 100 PPI.

E INK recognized there were some fundamental problems with Kaleido, that needed to be addressed right away. After six months of development they released Kaleido 2 or it is now known as Kaleido Plus, in early 2021. It solved many of the issues we noticed with the first generation. The greyscale uniformity has been drastically improved, so the background will always be grey, instead of colors trying to mix together to create grey. It has better color accuracy, support for screens as small as 5.84 and as large as 10.3, and everywhere in between. Since they are focused on larger screens, this means they have solved how many colors can be displayed simultaneously and upped the PPI, for higher resolution content. They also augmented the regal waveform controllers for faster performance, in regards to displaying graphic novels, comics, manga and ebooks. The color gamut has been improved by over 3x and text is crisper.

In the past 12 months, 12 different e-notes and e-readers have been released. Here is a comprehensive list of all of the different ones, in order of release date.

iReader C6 –  The iReader C6 will hold the distinction of being the first modern e-reader that is employing color E INK e-paper. This device is only available in China and despite the fact it is running Android, it has a custom launcher that prevents sideloading APK files or changing the language from Chinese to English.

Hisense A5C – Hisense surprised everyone and released a color E INK smartphone, this was an entry level device, it mainly showed off what this tech was capable of. It had middling specs,  and did not really sell that well.

Hisense Pro CC – A few weeks after the A5C was released, Hisense released the Pro CC.  What makes the Pro CC different from the Hisense A5C? It has a higher version of Android, 10 to be exact. It has more RAM, a better processor, a fingerprint scanner, two microphones, a dedicated speaker on the side of the device and two new speed modes, to increase the refresh rate, so watching videos or playing games can be a thing.

Pocketbook Color – The Pocketbook Color is the first e-reader that had mass market appeal and was employing the brand new E INK Kaleido. This device is capable of displaying over 4k colors and can also read ebooks using just B&W text with 300 PPI.  Up until now, all of the E INK products that were released, where aimed at the Chinese market, whereas Pocketbook supported over 20 languages. This device was their number one bestseller, of all time.

iFlytek C1 – The iReader and iFlytek both use similar design, with a flush screen and bezel, but tap into different ecosystems. The iReader uses Baidu, while iFlytek uses their own and also Migu, these two devices are perfect for Chinese speaking people who live outside of China, students studying abroad, or other circumstances.

Onyx Boox Poke 2 Color – The last device of 2020 that used Kaleido 1 color e-paper was the limited released Poke 2 Color. Onyx only produced a 1,000 units total, and they basically instantly sold out in a week. This device was aimed at an international audience, and like Pocketbook, supported over 20+ languages.

Bigme B1 Pro – The Bigme B1 Pro is the world’s first E INK device that has a 10.3 inch screen and has a great digital note taking experience. This extra large display is what people have been waiting for, since it is ideal for comics, magazines and newspapers. Bigme is a relatively new brand to the e-reader space, and this is their first commercial product. It is only available in the Chinese market, so the UI and all of the stock Android 8.1 apps are not in English. Luckily, you can sideload in your own apps and digital content, so there is lots of value here. Word has it, you can install some Android launchers that will turn it into a fully featured English tablet.

Pocketbook Inkpad Color – This was the first e-reader that utilized Kaleido 2 color e-paper. This 7.8 inch e-reader is very ideal for comics, manga, webtoons and other content that was too small for a six inch screen. This device was the most popular e-readers of the year so far, even though it is more expensive.

Hisense A7 CC – The Hisense A7 CC is the first color E INK smartphone of 2021 and it has flagship specs, that could possibly be your daily driver. It has great hardware specs and 5G internet access that is compatible with most European and US carriers. Great strides have been made with color e-paper over the course of the past four months. There is now greater greyscale uniformity and color accuracy, providing a great experience when surfing the internet, using apps or curling up and reading a comic or graphic novels.

Onyx Boox Nova 3 Color – This was the most important release of the past twelve months. It sold the most units and  is widely accepted as the best e-reader and e-note that you can buy.  This 7.8 inch device is running Android 10 and comes with Google Play, so it is now possible to read all of your favorite library books, ebooks, comics, manga, magazines, newspapers or webtoons.

Bigme S3 Color – The Bigme S3 is a brand new 7.8 inch e-reader and e-note that is using the E INK Kaleido Plus color e-paper screen. This device is localized for the Chinese market, so all of the preinstalled Android apps and UI is entirely in Chinese and there are no options to change it to something else. So this device is primarily aimed at this audience, although since it has wide availability, it can be ordered anywhere in the world. You will get value out of the S3 if you want to take notes using 8 different colors or edit PDF files. One of the big benefits of the Bigme, is that it has long battery life, so you only need to charge it every couple of weeks and can easily use it outside. The Bigme S3 is expensive, since the company is relatively new. It retails for $899.

Smartbook V5 – The Smartbook V5 Color is a brand new hybrid e-reader and digital note taking device. It intitially launched in the Chinese market, but various resellers have made it available internationally. There are various language options, so it can be entirely switched to English, which is really rare for Chinese devices.