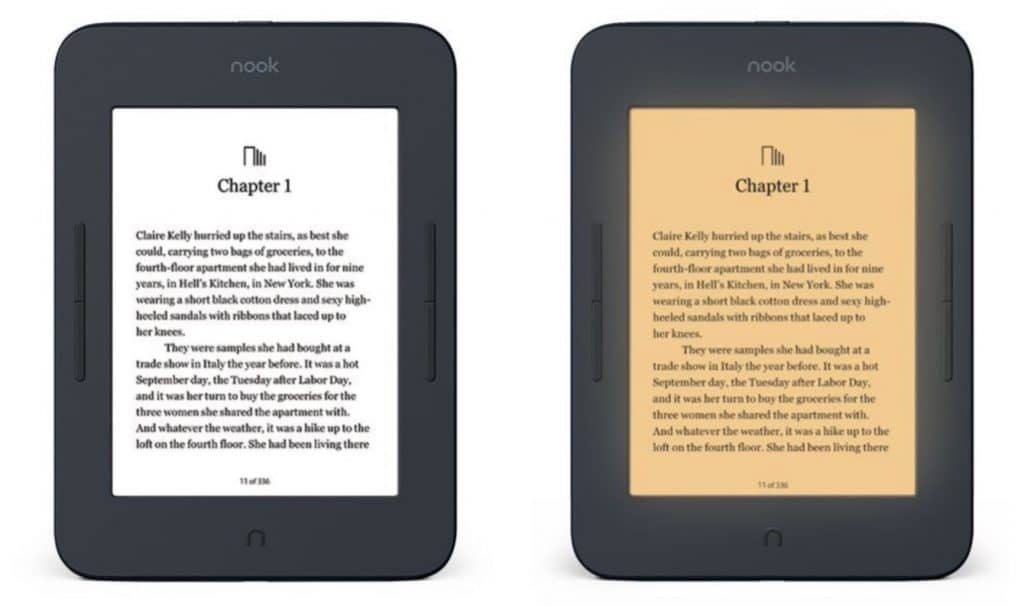 Barnes and Noble is going to be releasing the first e-reader in over two years and this device will be in all of their 600 retail locations and available online. In a world of smartphones eliminating the bezel and the new Kindle Oasis having one of the smallest bezels in the history of e-readers, the Nook bucks this trend has has a huge bezel. The overall design is uninspiring  and is not waterproof. Suffice to say, B&N has made some serious misplays in the ereader and e-book arena, do they deserve a second chance? Will you buy the Nook Glowlight 3?

The B&N Nook Glowlight 3 maintains a lot of the design elements of the original Nook Glowlight that was released in 2013. The new model has a black rubberized frame and the corners are less rounded. There are a series a of buttons that do different things, depending on if you are single clicking or double clicking them. The buttons are positioned differently than the original and there is no home button, it is all software driven.

The Glowlight 3 features a six inch capacitive touchscreen display with a 300 PPI screen, although the bookseller has not disclosed the exact resolution. They did mention that this new model has the highest resolution screen they have ever developed, which leads be to believe that it is 1430 x 1080.  On the hardware side of things it is running 1 GHZ Freescale processor, an undisclosed amount of RAM and 8GB of internal memory. There is 6GB of memory available when you turn it on for the first time and there is no expandable storage via an SD card. Users will be able to access the Nook Bookstore and Nook Readouts via WIFI, but there is no Bluetooth or 3.5mm headphone jack and it is not waterproof.

One of the big advantages of the Nook is that you can try before you buy and Barnes and Noble has over 600 stores in the United States. If you find yourself with a defective unit you can simply bring it back and get it swapped out for another. Amazon operates less than a dozen bookstores in the US and tends to only operate in big cities.

Barnes and Noble has alienated many of their users over the years with questionable business decisions. Amazon and Kobo release at least a few new e-readers a year and constantly refine their products and introduce new features. Barnes and Noble seems to release a new e-paper device every two or three years and they lag behind their competition. We have yet to put the new Nook side by side with the Kobo Aura One and second generation Kindle Oasis, but I have a feeling these two devices will trounce the Nook.

The question remains. Barnes and Noble has a new device and will likely sell a large number of units with the Christmas season right around the corner. The device costs $119 so it is friendly on the pocketbook. Will you buy the Nook Glowlight 3 or take a pass?