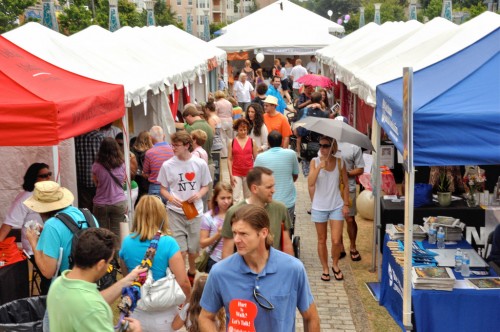 LitHub recently profiled the amazing story of Saraciea Fennell, a publicist for a Big Five publisher, who took on a seemingly impossible task for the best of reasons. After seeing the lack of attention her home in the Bronx receives on the literary radar, she set about creating the Bronx Book Festival. The daunting task has been a labor of love, and thankfully, has received widespread support from authors, readers, residents, and other interested parties.

But what about small towns in Ohio? Underserved cities in California? Homeless camps on the fringes of Seattle? Where are all the powerhouse organizers who are bringing books and a love of reading to them?

That’s where the power of digital publishing and technology come in, coupled with the abundance of indie authors looking for promotion for their high-quality content. Organizing a top-name book festival for the Bronx (and bringing authors and illustrators to meet children in the area’s public schools) is certainly a fantastic feat, but meeting a similar need on a smaller scale can be done without the manpower and the $30,000 Kickstarter campaign that Fennell successfully launched.

What’s the holdup? For too many indie authors, it’s a lack of knowing where to begin. For others, it’s the small voice that tells them they haven’t sold enough books, written enough books, or garnered enough reviews for anyone to care to hear them speak–all of which are patently untrue. Unfortunately, for a small percentage of authors, it boils down to an unwillingness to give their work away for free, even if it means the opportunity to network, reach a larger audience than previously possible, and garner attention and a following for later books.

Of course, as with Fennell’s extraordinary undertaking, the outreach must be purposeful and reader-centric. Staging a book festival or author event with the singular goal of selling books isn’t useful or probably even fruitful. However, creating events that connect readers with authors they don’t yet know in a way that fosters an interest in books is never a waste of time or money.