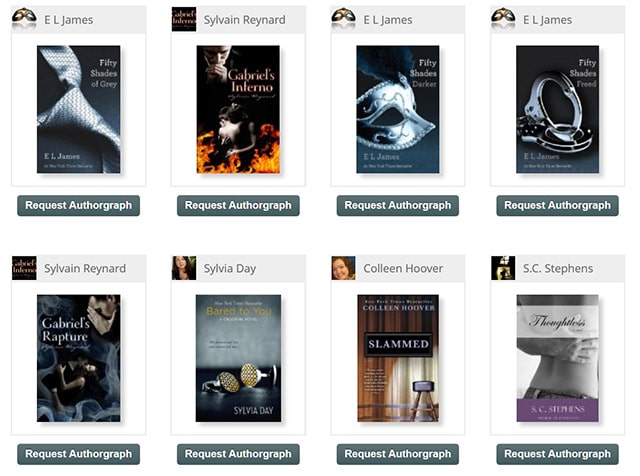 Evan Jacobs started Kindlegraph in early 2011 with a unique system that connected authors with their fans to digitally autograph ebooks. Over 5,000 authors have listed more than 20,000 books to be made available on the platform. In a bid to provide a wider appeal, the company has been renamed “Authorgraph” and authors can now sign digital books on any platform.

In the past, if you wanted to have your book autographed by an author, you had to wait for them to visit your town. In many cases, unless you lived in a big city, you would never get a chance to have the author physically personalize the autograph. In a world of connected social media and the rise of e-readers, something had to give.  When Kindle Graph first launched, it gained immediate attention on Twitter and over 40,000 Authorgraphs have been signed.

Up until recently, the service was exclusively aimed at Kindle users. When you purchased an ebook from Amazon and used the Authorgraph website, you could petition the author to make a custom signing for you. It would add an additional page within your book and would retain the AZW format that Amazon employs on all of its books. Authorgraph is completely free and there are no fees levied against the authors or fans for the entire process.

We spoke to Evan Jacobs, the creator of Authorgraph to find out some of the semantics on the brand change. “The first version of the service was named Kindlegraph because I love my Kindle and the service was aimed squarely at other Kindle owners. However, after answering many questions about compatibility for other devices I opened the service to all reading platforms and so I wanted to change the name so that it reflected the universal nature of the service.”  So a major question arises, how does Authorgraph handle book formats for all of the other non-Kindle and tablet devices of the world?  He said, “Basically any device that can render a PDF document is now supported. Kindle devices and apps still offer a slightly better experience because Authorgraphs can be directly delivered to them.”

Authorgraph is gaining heavy traction in the industry and does no marketing on its own. It relies on authors to promote their books on the service on Facebook, Twitter, and Goodreads. There are plenty of authors who love the service, according to Jacobs. “I’ve been incredibly lucky with how the service has grown purely by word of mouth within the author community. I haven’t spent any effort on marketing but that is an area to which I’ll devote more attention in the next year.”

Having authors on your side, whether they are self-published or mainstream, is beneficial to Authorgraph’s growth. The company is constantly getting feedback to improve the services. “Perhaps my single favorite thing about building Authorgraph has been the opportunity to interact with the author community. They have been so supportive and generous with their thoughts about how to make the service better. My upcoming feature list is almost exclusively comprised of ideas that came directly from the author community.” Authors have also lobbied for new features of the website, such as author groups and better discovery. Evan commented on some of the new things that got implemented into the website in the last few months, “Featured Groups (as well as Featured Authors and Featured Books) is an experiment is helping people discover new books and authors on the site. The idea of discoverability is something that I plan to focus on quite a bit over the next year.”

There are more than 5,000 authors who have listed more than 20,000 books on Authorgraph. Some authors have fulfilled only 1 or 2 Authorgraphs while a few have fulfilled hundreds or thousands. This is fairly solid growth, considering the service is completely free and is a labor of love from Evan. Obviously, there is some room for growth and to monetize the platform. He was rather cryptic in his remarks, only stating, “The current Authorgraph service is free for both authors and readers. However, there is an even bigger opportunity to help authors reach their current (and future) readers on an ongoing basis. I hope to reveal more details about how this will work in the near future.”

What is next for Authorgraph? Besides this company, there are precious few others facilitating the digital signing process of ebooks. Evan finalized the interview and said, “I’m very excited about the coming year. My focus will continue to be making the service easier and better but I’m also going to explore some ideas for helping authors with more of their marketing and promotion needs.”

Interested to see which authors and books are available on the Authorgraph platform? Check out the main website and get started for free!  You may also elect to try out the official Android APP from the Good e-Reader App Store.