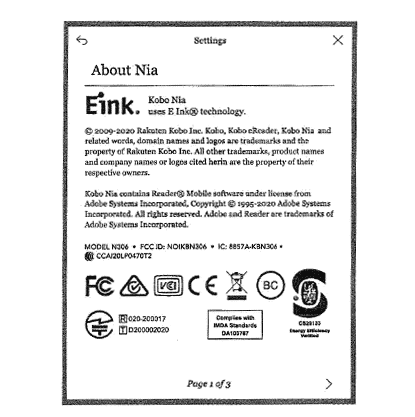 Good e-Reader has exclusively learned that the Kobo Nia is a new device that is going to be coming out soon. I believe the Nia  is going to either replace the Kobo Aura or Kobo Clara HD. This e-reader should be available in the next month or two.

Netronix has filed an FCC application on behalf of Kobo. Netronix does all of the hardware manufacturing for Kobo and Kobo primarily sells the e-readers through their global supply chain of bookstores and big box retailers such as Walmart. Kobo also sells ebooks and bundles their bookstore on the device, they also have Pocket for web articles and Overdrive functionality to borrow library ebooks.

The exact specs for the Kobo Nia are under embargo for a number of months. The only thing we do know is that it has a MicroUSB port, WIFI and a 1,000 mAh battery. The internal storage of the Nia is 16GB via the sandisk SD card. All of the modern Kobo e-readers have a SD for the storage, that is soldered onto on the motherboard.

The FCC application normally gives us a sense on what this device brings to the table. Since it is only powered by a 1,000 mAh battery and does not mention a WACOM active digitizer or an accompanied stylus, that ships with the unit, this is probably an entry level device.  It will either replace the recently discontinued Kobo Aura or the Kobo Clara HD, which came out in early 2018. I do not see Kobo having more than 3 SKUS in their modern portfolio, so I surmise it will look like this. The Kobo Nia, Kobo Libra and Kobo Forma.