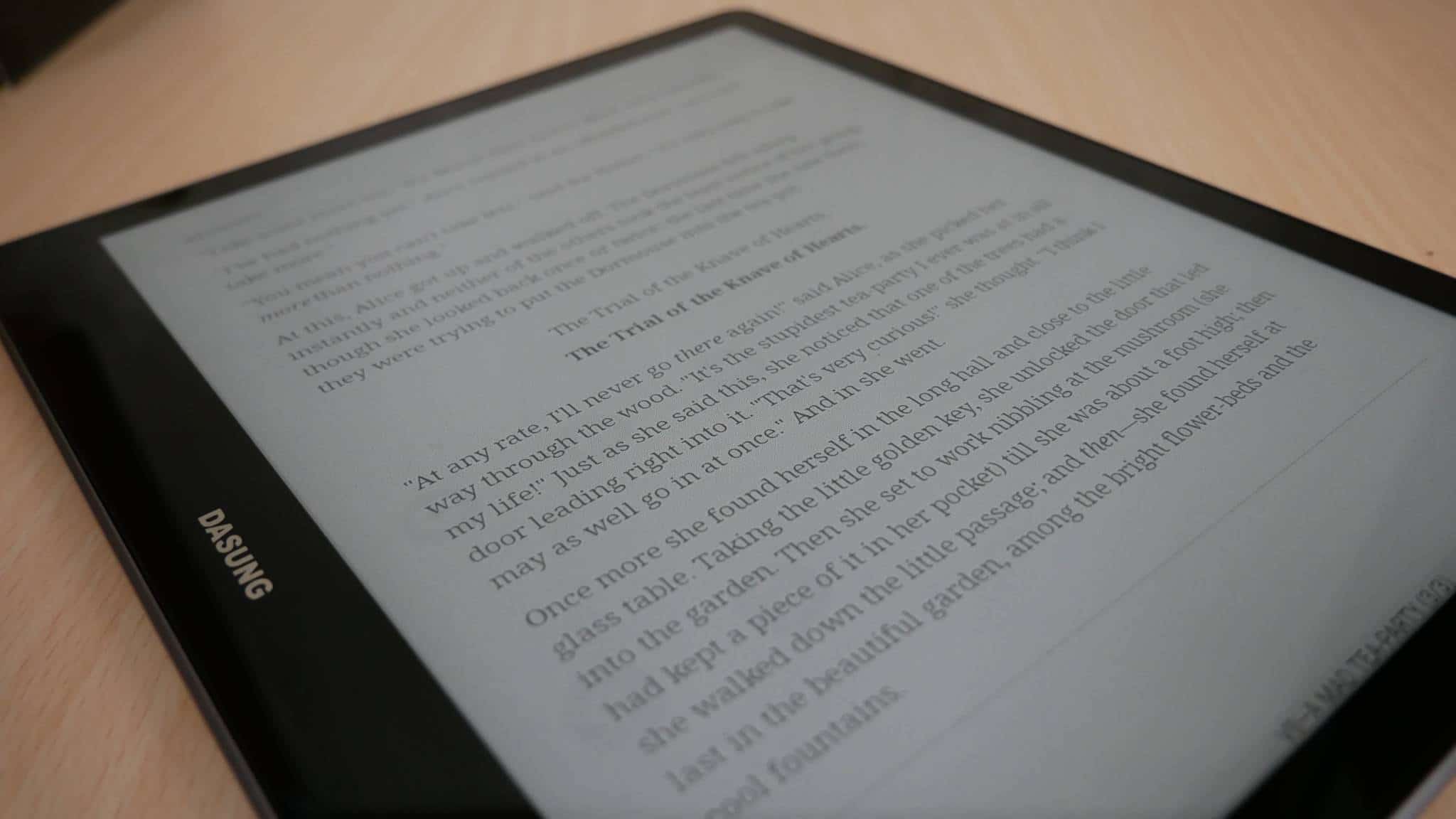 Many people are adverse to crowdfunding campaigns and Dasung tends to raise capital in this manner. It is very hard to buy their products when they first come out and often, you have to wait over a year to purchase one directly from their website. The Not e-reader 103 is a strange name for a product, but the user experience is anything but. This device acts as a secondary display for your computer and also your smartphone. Unlike other E INK monitors on the market, this one actually has a processor, RAM and an internal battery. You can employ it as a dedicated tablet, it is running Android and has full access to the Google Play Store to download and install apps.

One of the biggest selling points of Not E-Reader 103 is that there are various speed modes that make this the fastest E INK product on the market. This is primarily attributed to the patented DASUNG Turbo technology, which provides high speed refresh system with almost no latency. There are various speed modes that can be employed and this benefits apps the most. Amazon Kindle, Overdrive Libby, Scribd and Kobo for Android were all developed for flagship smartphones with LCD screens, so they look very pretty. Whereas on E INK devices, the page turns are often janky, because of refresh rate issues on typical E INK devices. This Dasung handles it all like a champ, the performance is much akin to a LCD screen. You can watch Youtube videos, listen to music and the experience is truly excellent. It can easily handles anything you can throw at it. It is the most responsive product we have ever reviewed.

The Dasung Not e-Reader 103 features a 10.3 inch E INK Carta HD display with a resolution of 1872×1404 with 228 PPI. With high contrast clear retina screen, the display effect is clearer and sharper. It has a front lit display with warm front-light, there are around 30 LED lights. There are slider bars to control the lighting with over 256 different levels, it can also be completely shut off.

One thing we noticed about the screen is how reflective it is. This is due to the glass based display and the screen being flush with the bezel. Overhead light or using it outdoors will not absorb light, instead it reflects it. I would recommend using a matte screen protector to help defuse the light, this would make it easier to use in environments with of natural or artificial light. Dasung includes 2 screen protectors in the box, a regular one and matte. 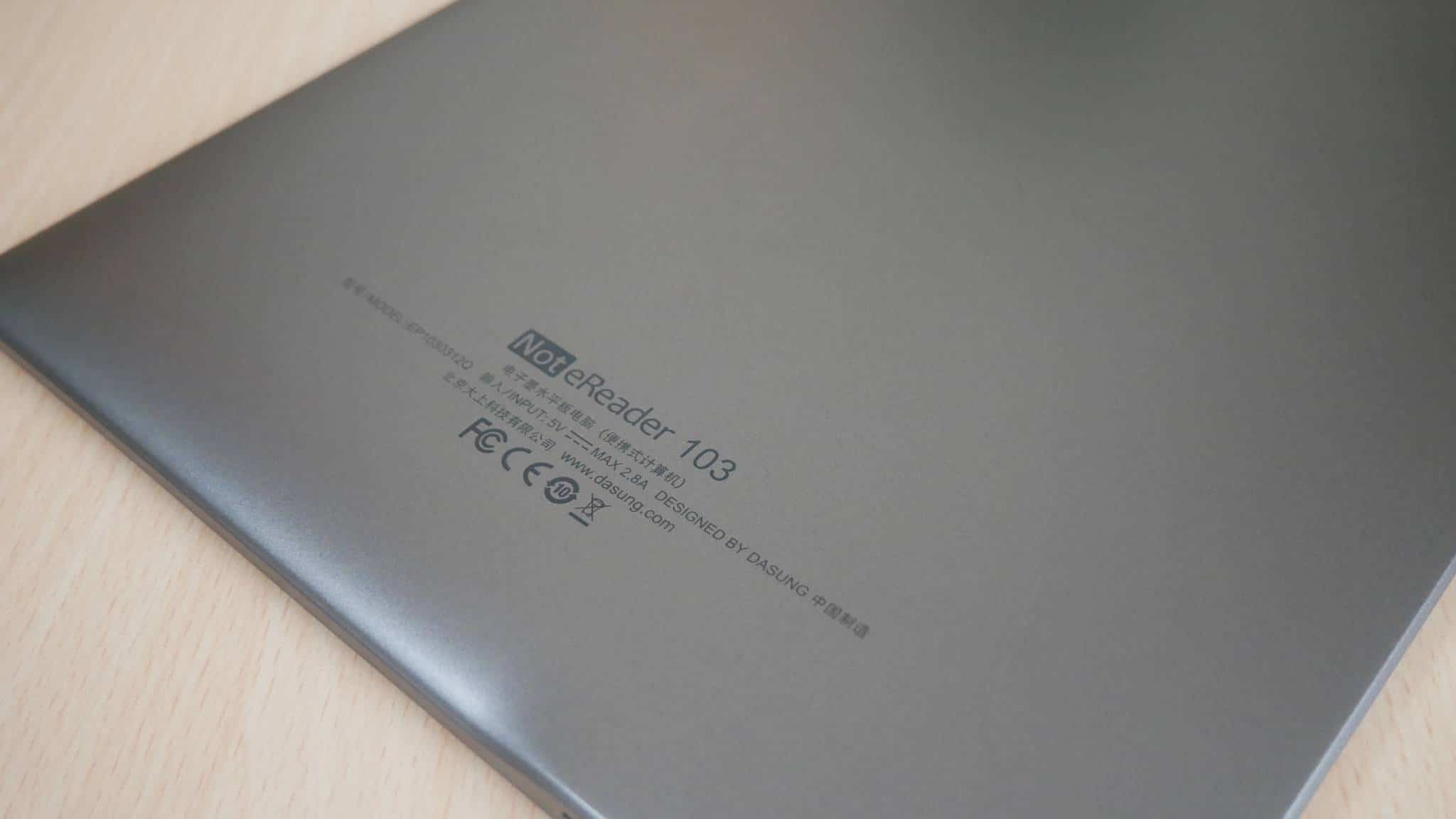 The overall color scheme is black with silver accents on the side. There is a USB-C port on the bottom, a single speaker and microphone. One of the best things, is that it has a SD card. There are two buttons, aside from power. The upper left is the contrast adjustment button and the ghosting clear button, no matter how fast the refresh system is, sometimes there is staining on the screen and this button will remove it with a full page refresh. The back of the Not-eReader 103 is made of plastic, probably to reduce the weight of the body, without a metal back cover. The back cover is a silver-gray matte layer.

Underneath the hood is a Qualcomm Snapdragon 660 Chip processor, 4GB of RAM, 64GB of internal storage. It is running Bluetooth 5.1 and has wireless internet access to browse the web and access online functionality. It has a USB-C port with OTG functionality, so you can easily connect up accessories, such as a keyboard or other peripherals without the need for drivers. You can listen to music via the 3.5mm headphone jack, speaker, but also connect up wireless accessories via Bluetooth. There is an HDMI port, which is primarily used for connecting up the display to your computer. There is a Micro HDMI to full HDMI cable that comes with purchase. In order to connect it up to your smartphone, you can use WIFI or Bluetooth. We noticed the best performance, with the least latency, use both Bluetooth and WIFI. The display is powered by a massive 6400 mAh battery, typically you should get around one week of usage, before needing to recharge. If you use it as monitor, it is recommended that you always keep it plugged in. The dimensions are 232x191x9.1mm. 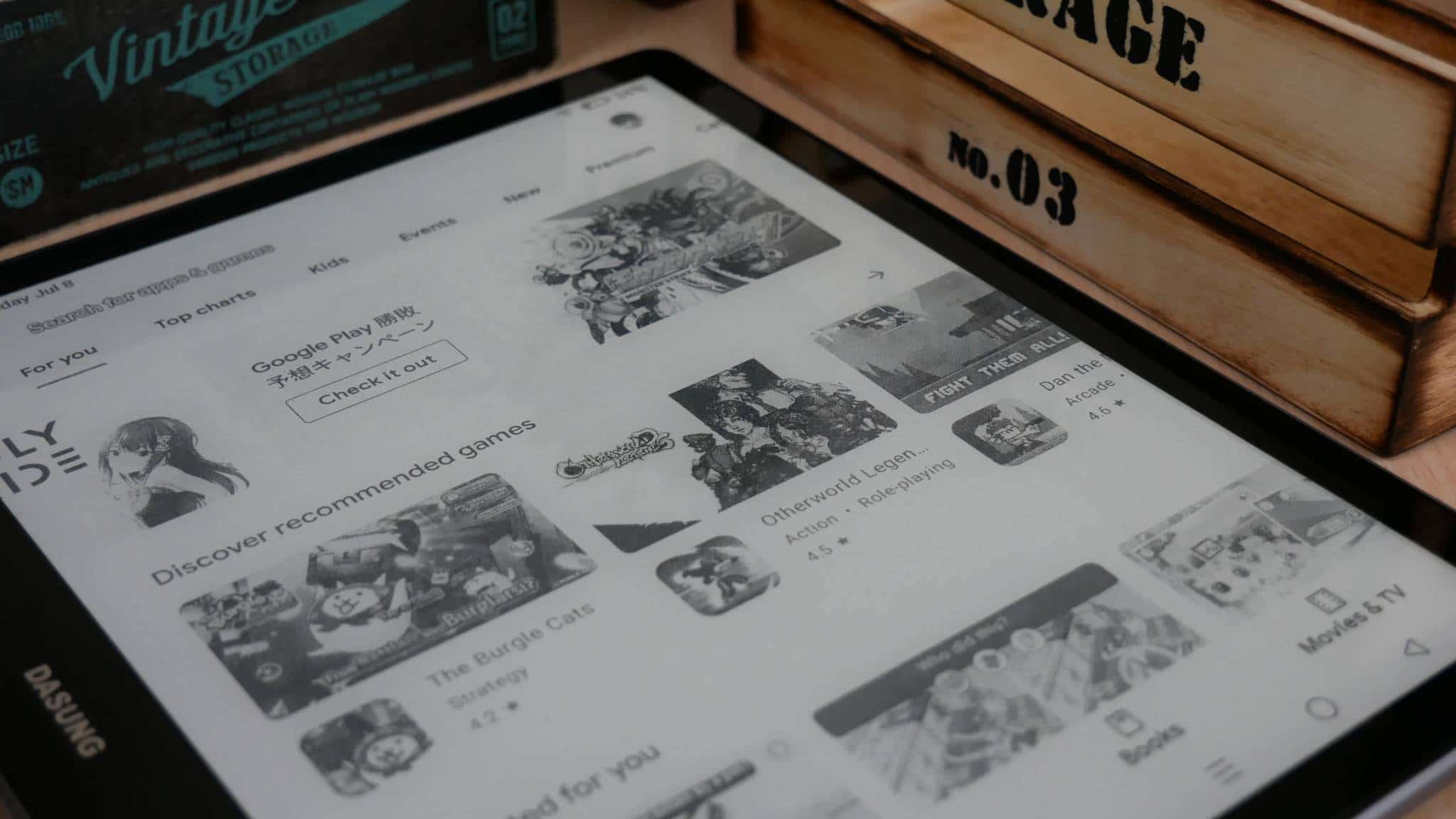 The Dasung Not e-reader 103 is using Google Android 9 as an operating system. This OS will allow you to sideload in your own apps, but it also has Google Play. You can easily download millions of free and paid apps. Dasung does not report that this unit has access to Play, in their Shopify store listing and Kickstarter campaign, it clearly states that it is not Play certified, so they likely found a workaround for it in the past couple of months.

The 103 has three different speed modes to increase the responsiveness of the tablet. You get Fast+, Fast++ and Fast+++. This is sort of a hybrid A2 mode, each one increases performance, but degrades image quality. Fast+ is provides the best image quality, while slightly increasing responsiveness. Fast++ is good for rapidly viewing websites, apps with animations, viewing PDF files and browsing Google Play. Fast+++ is purely designed for multimedia content, such as watching videos.

In order to get the most value out of all of the different speed modes, you will want to optimize the the contrast. There is a slide bar, which really gives you a ton of flexibility and options. There is also a greyscale adjustment which helps with saturation. There are four different image modes, which primarily apply to image heavy content, such as PDF files or image heavy websites. There are four image modes, image 1 filters out lots of unnecessary information and you just see an outline of the image. Image 2 improves image clarity and improves front burrs. Image 3 gives you the best image clarity, Image 4 just makes the picture have more shadows, pictures appear darker. 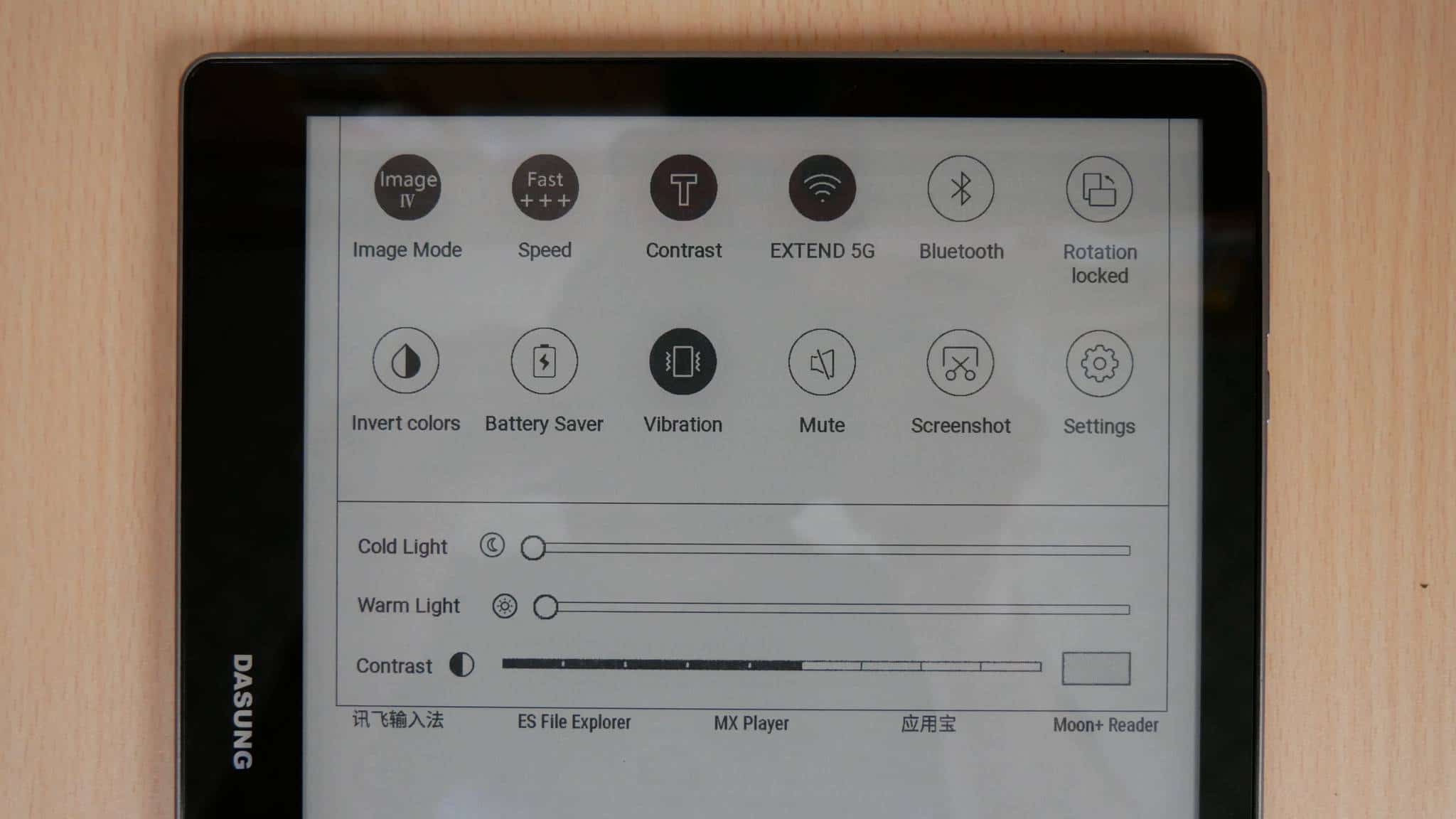 One of the drawbacks of customizing the greyscale and contrast settings is that they do not automatically save for the various speed modes. So, lets say you want to optimize the Fast++ mode for viewing PDF files. You might spend around five minutes fiddling around with the various settings to get the best experience. When you switch to Fast+ to start reading an ebook, you will have change everything back, to make Fast+ optimized.

Other then all of these features, it is a typical Android tablet. It comes bundled with a bunch of Google apps, such as Chrome, Maps and everything else. Although you will likely want to install your own apps, depending on your use case. There are literary millions of apps and everyone will use this tablet differently.

If you want to invert the colors that are displayed on the screen, there is a system wide dark mode. This will change the background from white to black and the text from black to white. Some people really like dark mode, so this device supports it and also apps that have the option to change to dark mode, exclusively within that particular app.

I really like how the Dasung 103 is so fast and robust. It is super quick and the performance is the best in the business. If you use it to mirror your smartphone, you will be able to view anything that is displayed on your phone. If you use it a secondary monitor for your PC, there are so many options to really make it your own. This product will really appeal to people who need to view a screen that is easy on the eyes. 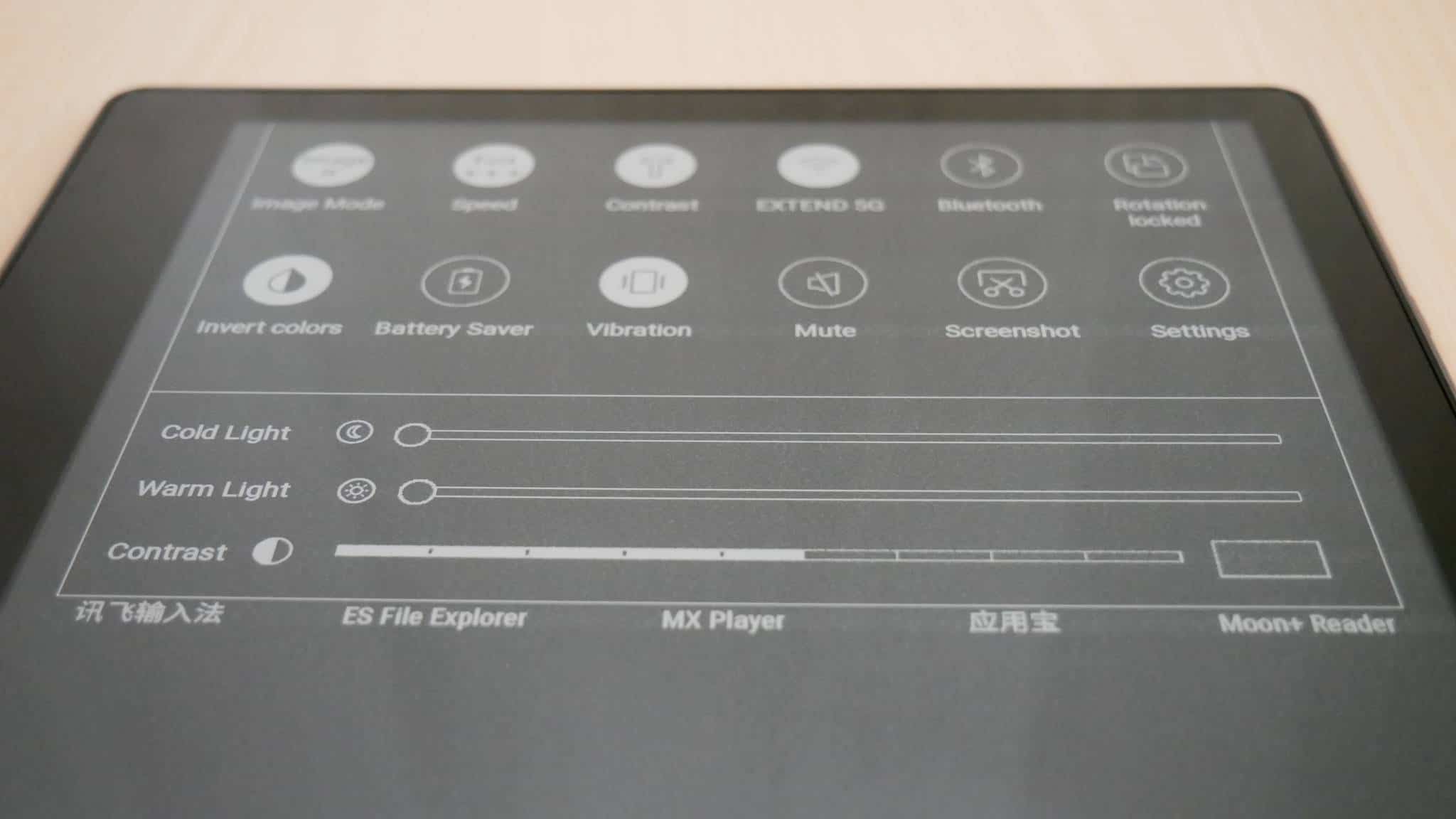 The only thing that is holding back the Dasung Not e-reader 103 is the fact it costs between $900 to $1000 to buy it, which is fairly expensive. Still, if you intend on using it exclusively as a secondary monitor, the price is actually not that bad, compared to the competition. The Onyx Boox Max Lumi can act as a secondary monitor and has a giant 13.3 inch screen and retails for $879. This device can also be used as a tablet too, but has a WACOM layer, so you can take notes, freehand draw and make annotations, but the Dasung has better global contrast, image settings and the speed modes are better. There is also the Onyx Boox Mira and Mira Pro, which are currently just available in China, and are purely monitors, with no tablet functionality. They should become available for English speaking customers in October, but they will cost over $1000. The upcoming Dasung 253 is a 25 inch E INK monitor, with no tablet functionality and will retail for $2000.

If you look at the competition, the Dasung 103 actually provides the most value. It is more affordable than other secondary monitors on the market and does a really good job at mirroring your iPhone or Android device or using on your PC or MAC. I would recommend this device, it is the most responsive E INK product I have ever seen, and I have been reviewing products since 2007.