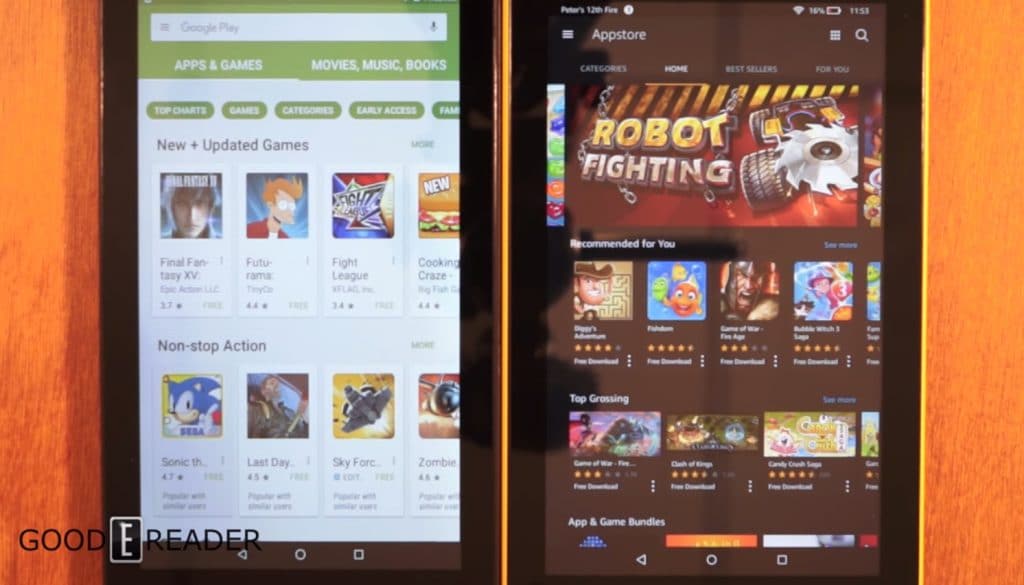 Amazon and Barnes and Noble have both released new tablets in 2017 and they are both compelling for different reasons. Amazon has bundled Alexa with their latest 7 inch tablet, whereas B&N is getting back into designing their own hardware after years of marketing Samsung tablets with Nook apps. Both of these devices cost $49 and is primarily only available in the US.

The Fire 7 comes in two variants, a 8GB model for $49 and a 16GB version for $69. It features a seven inch touchscreen display with a resolution of 1024×600 and 171 PPI. The low resolution makes the pixels big and  blocky, which are particularly bad for rendering smooth-looking text and also not great for images. Underneath the hood is a 1.3 GHz quad-core CPU processor and 1GB of RAM.

The crown jewel of the new Fire 7 is Alexa. US residents have had this feature for awhile in their tablets, but this is the first time it has been available in the United Kingdom.  This is the same voice assistant that is found in the company’s Fire TV and Echo smart speaker devices, and has access to the same information.

Barnes and Noble first started designing their own tablets in 2010 and the bookseller continued developing their own hardware until 2014 when they ironed out an agreement with Samsung.  In 2016 Barnes and Noble took a page out of Amazon’s playbook and decided to design a new low-cost tablet that they could market for $50.

The Nook Tablet 7 features a seven inch capacitive touchscreen display with a resolution of 1024 x 600 and 171 PPI. Underneath the hood is a quad core 1.3GHz MediaTek CPU, 1GB of RAM, 8GB of internal storage and it has an SD card that is capable of an additional 128GB.

On the software side of things this is running Android 6.0 and has Google Play. You will be able to download over a million apps and games. It also features an enhanced digital bookstore experience with B&N Readouts, which brings the pleasures of bookstore browsing and discovery to the NOOK digital experience, and access to a growing library of NOOK Audiobooks and a huge selection of digital magazines and newspapers through the NOOK Newsstand. NOOK Tablet 7 also supports NOOK Profiles, enabling families to customize up to 6 profiles that turn the tablet into a personalized reading and entertainment center. Parents will appreciate the ease of setting up profiles for their children with lots of relevant kid-friendly NOOK content for them to enjoy, while managing appropriate content and access to the NOOK Store.

The purpose of our comparison video is to give you a sense on what both of these tablets bring to the table. You will get a sense on how the shopping experience plays out, since you will be downloading apps, purchasing audiobooks or eBooks.  The intention is to put the same content on both of the screens so you can see what model is better for your specific needs.