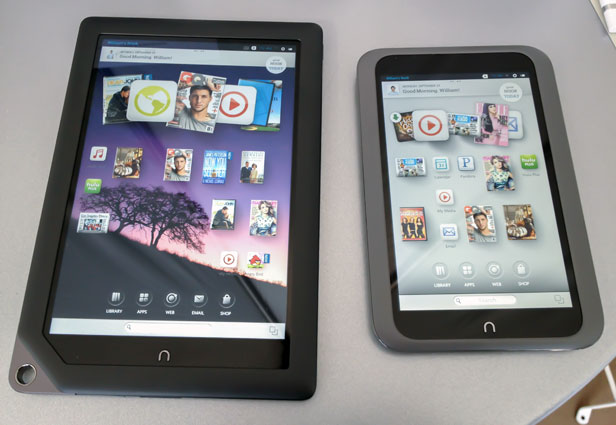 Barnes and Noble has officially released their two latest tablets in the United Kingdom. The Nook HD is poised to cost £159 for an 8GB model and only £189 for a 16GB version. Meanwhile the 9 inch Nook HD+ is available for 16GB for £229 and 32GB for £269.

Customers across the UK who pre-ordered the devices will start seeing them arriving throughout the week. The tablets are going to be hitting the shelves in John Lewis, Argos, Asda, Dixons, Sainsbury, Waitrose, Blackwell’s and Foyles and they are also available to purchase through www.nook.co.uk.

Jamie Iannone, President of NOOK Media, said: “Our new tablets offer the best quality reading and entertainment experiences, at the best price. With the highest resolution 7-inch display available in the UK, every book read, every movie watched, every game played is rendered in a digital quality unmatched by other tablets. Pre-orders have exceeded our expectations and we look forward to UK customers being able to experience these stunning new tablets.”

One of the drawbacks of the Nook launch in the UK is the inability to access video or television shows via the app store. Barnes and Noble has not localized any of the content yet, so this is one of the main drawbacks.