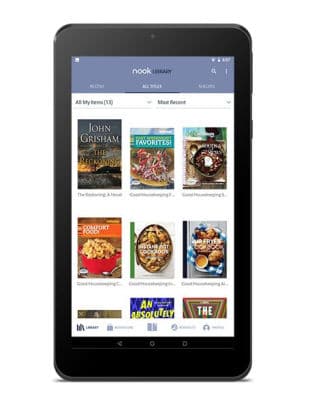 Barnes and Noble released the Nook Tablet 7 last year and it is considered a very budget device. It primarily completed against the Amazon Fire 7 and appealed to people invested in the B&N ecosystem. Today the nation’s largest bookseller announced a second generation NOOK 7 tablet with expanded storage to carry your virtual library, and an updated reading experience just in time for holiday shopping. It is available today in stores and online for $49.99.

The new NOOK 7 tablet offers double the storage space as the previous model at 16GB (expandable up to 128GB), a front and rear facing camera, Bluetooth capability, a headphone jack, a speaker, and a microphone. The new NOOK is a full-featured tablet with a beautiful LCD display, connection to the Google Play Store, as well as a soft-touch finish and upgraded NOOK software for an improved reading and browsing experience.

The new tablet has a custom home screen with easy access to your current read and recent purchases and shortcuts for browsing the NOOK Bookstore and Library. The tablet also gives readers access to Barnes & Noble’s Browsery, where book lovers can talk about their favorite books and get recommendations for new ones from a community of fellow readers.