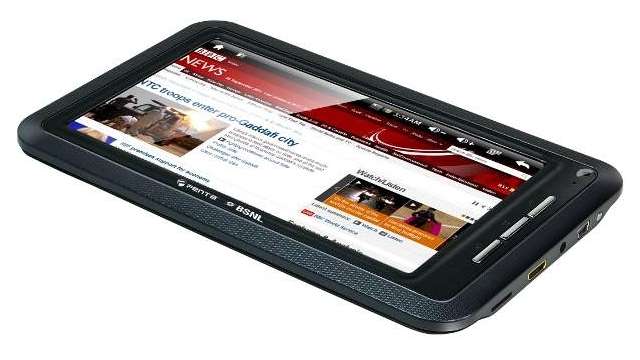 It was just a few days ago that BSNL first announced plans to launch a troika of tablets in the Indian market. The three tablets range in price from an Aakash challenger to one that can take on the likes of the Reliance 3G Tab. However, while the Aakash is still languishing along without hitting headlines with such high pre-order sales figures, BSNL has made quite the media splash just a few days since being announced.

As Virendra Singh, managing director of Pantel Technologies stated, “We have received more than one lakh pre booking orders over phone and online for the three tablets which we have launched in association with BSNL.”

Virendra Singh has further good news to share. “Apart from the consumers’ interest, we have also got an order for two lakh tablets from Sahara India,” he said.

Those are the kind of figures that can make any one to sit up and take notice of the BSNL tablets. Datawind has notched up a million plus pre-orders for its Aakash tablet, though the device seems mired in controversy right now. In contrast, the BSNL base level version is a few hundred rupees more, but also comes with more features than the Aakash. Further, BSNL is a state owned entity and already a formidable player as a communication service provider. As such, it shouldn’t be too surprising if its tablet PCs backed get a stupendous response.

The Noida based Pantel Technologies is manufacturing the tablet devices with deliveries slated from March 5th. The tablets will also reach BSNL outlets March 1st. Meanwhile, those interested in placing their orders for the tablet can do so here.