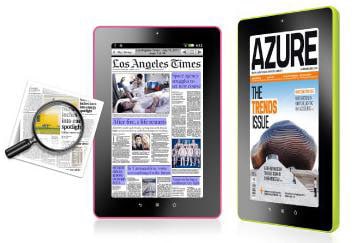 While different tablet makers are engaged in a battle for market supremacy, their component makers are engaged in a power struggle of their own. Take, for instance, the touchscreen display that greets you when you switch on your tablet device for the first time. The iPad display that has played host to so many of our fingerprints is based on IPS panels, while a key rival to it is the FFS (fringe field switching) LCD panel that has gone into the making of the recently launched Kobo Vox tablet. Now, as per the latest development in this field, E-Ink Holdings has opted out of an agreement it had reached with LG Displays as regards the production of the FFS panels. Instead, Chunghwa Picture Tubes will be manufacturing the FFS displays, reports Digitimes.

With this new turn of events, EIH will buy back those bonds issued by its Korean subsidiary Hydis Technologies that LG Display had picked up as part of the original agreement. Hydis Technologies will also be holding the patents related to the production of the FFS displays even as production is shifted to CPT’s 6G production line in Taiwan. EIH will have to part with a sum of $30.5 million to buy back the bonds now being held by LG Display.

As for the FFS displays itself, its makers claim it to be significantly superior to the IPS displays, in that the former enjoys wider viewing angles. The next gen iPad was also tipped to come equipped with the FFS displays, though that seems to have been changed in favor of the AH-IPS panels.