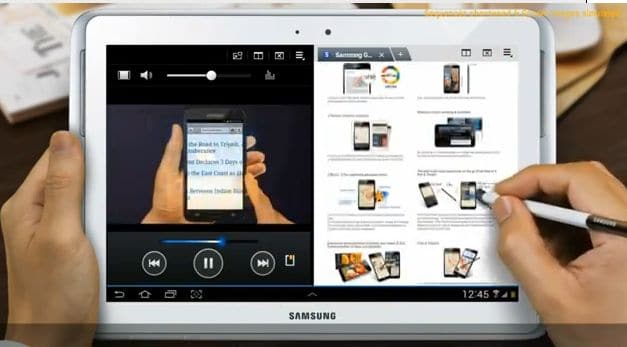 Samsung is in the midst of a crucial patent dispute with Apple though here comes a product that could pose some serious challenge to the iPad. The much awaited Galaxy Note 10.1 is now finally here with price starting at $499 for the base 16 GB version. That is bang in iPad territory while twice the storage — 32 GB will cost just $50 more at $549. The corresponding iPad version cost $100 more. The tablet goes on sale starting August 16. Also, the prices mentioned above are for the Wi-Fi only version of the tablet with the 4G LTE versions slated for a release later in the year.

The rest of the spec story is quite familiar by now. The tablet is similar in form and feel to the 10.1 inch Galaxy Tab devices that we have seen so far though the latest offering is a bit thinner and lighter. A 1280 x 800 resolution (rather low) 10.1 inch display makes up the front but includes a layer of active digitizer on top of the touchscreen that enables the tablet to respond to stylus inputs. Also, it is here that makes the Galaxy Note 10.1 stand out from the rest of the tablet crowd. The S Pen, as the stylus is being referred to by Samsung, opens up new possibilities with the device. Apps such as S Memo comes pre-loaded and scores on functionality though Samsung still has to ensure there are adequate number of developers pushing out new apps that can make the best of the stylus enabled device. Another nice app the Galaxy Note 10.1 comes pre-loaded with is the Adobe Photoshop Touch and the stylus does make things come alive here.

Performance can be considered adequate thanks to the 1.4GHz quad-core processor and 2 GB RAM that makes light work of almost anything that you throw at it. The tablet runs Android 4.0 Ice Cream Sandwich right now but will be provided with the Android 4.1 Jelly Bean update later in the year.

The Galaxy Note 10.1 supports microSD cards of up to 64 GB and is powered by a 7000-mAh battery which should allow for around 9-10 hours of operation.

“Our goal with the Samsung GALAXY Note 10.1 was simple – redefine the tablet experience,” said Tim Baxter, President, Samsung Electronics America. “The S Pen offers both active content creation as well as passive content consumption, while the Multiscreen capability finally enables true multitasking. For the user, the resulting experience is completely new and quite unexpected.”

The Galaxy Note 10.1 can be availed of from a number of retailers such as Amazon, Best Buy, H.H. Gregg, Office Depot, and TigerDirect.

Watch out for a complete review soon.