You are here: Home / Business News / Give the Gift of eBooks with Google Play Giftcards 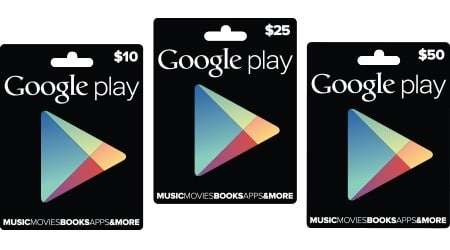 Google Play has finally released giftcards that will allow customers to purchase and load the cards in retail environments and then use them to purchase apps, games, and ebooks. They will be available at Target, Radio Shack, and Gamestop within the next few weeks. There are only three tiers of denominations currently – $10, $25, and $50. Right now this is USA exclusive, with no word of an international roll-out.

One of the tremendous benefits of the Google Play Giftcards is that you will be able to use them to buy ebooks from Google eBooks. This is something that would really spark an interest for the avid reader and might make a great gift. Normally, after the initial launch, retailers often give severely discounted giftcards to stimulate sales. Case and point, Walmart offers $100 iTunes cards for only $80, which gives you at least two free ebooks.

Many younger users do not have credit cards, which makes purchasing apps difficult. This is one of the primary reasons why Android apps are pirated to such a high degree. Now that people have an alternative to a credit card, hopefully piracy will be decreased.