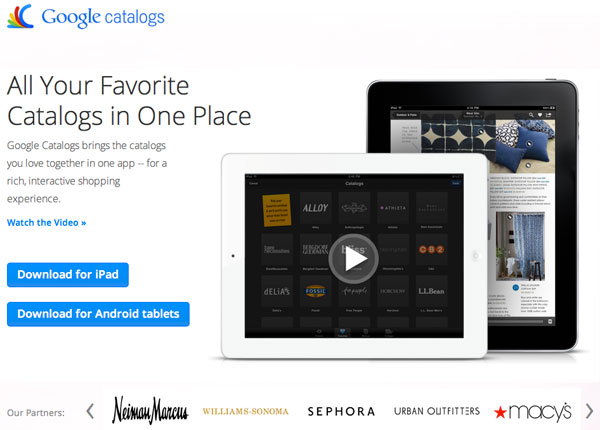 Google Catalogs has now finally made it to tablets running its own Android OS, several months after it having already made it to the iPad. So while iPad users had the opportunity to shuffle through the plethora of offerings that the various retailers are doling out from August this year, their Android tablet counterparts can now also do the same as well. Also the good thing is, Google Catalog’s emergence on Android tablets are just in time as Christmas shopping craze are all set to bubble over.

As Abigail Holtz, business product manager for the Google Catalogs team wrote on the company blog: “Google Catalogs features more than 125 brands you know and love like Nordstrom, Williams-Sonoma, Nike and Sephora.”

What’s more, users of the app will get to make their purchases right from within the app itself that leads to an online store. “With rich product images, videos, and the ability to curate your own personal collages to share with friends, Google Catalogs makes browsing your favorite mail order catalogs easy, fun and interactive,” revealed Google sources.

So if all of the above sounds too tempting, head over to the Apple store (for iPad users) or the Android Market (for users of Android tablets) for free download of the app. iPad users need to be running iOS 4.2 or later while for Android, the minimum requirement is Android 3.1.