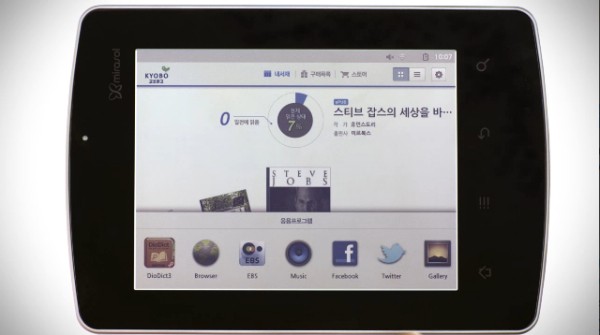 The Kyobo Mirasol e-reader has finally made the long trek from South Korea to North America. This is the first ebook reader on the market that utilizes the new Mirasol Color e-paper technology. Utilizing Android 2.3, it allows you to install your own apps and download new ones from the Amazon App Store.

The New Kyobo Mirasol e-Reader has only been around for a few short months and is totally amazing! It features a 5.7 inch capacitive display with  a resolution of 1024×768. It really does pack a punch in terms of how good things look on this small screen and we noticed comics, books, and images often look better than on competitive devices such as the Kobo Vox. Underneath the hood lurks a 1 GHZ Qualcomm Snapdragon S2 processor and 512 MB of RAM. This Mirasol e-reader might not have the dual core punch that the Kindle Fire or Nook Tablet has, but it is enough to do common tasks without long delays in programs opening or web browsing.

This new e-reader runs Google Android 2.3 and ships with many reading apps to get you right into reading. It comes with Moon+ Reader, Aldiko, Nook, Kindle, and Kobo for Android. It is also bundled with services to allow you to install your own apps such as the Amazon Android Market and our own Good e-Reader App store.

You can order it right now for $399.99 from Shop e-Readers and have it delivered anywhere in Canada, USA, and internationally fairly quickly.