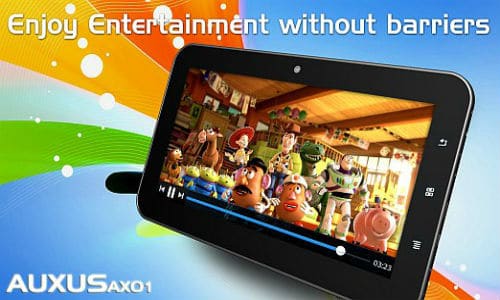 Come July a new tablet from iBerry India will enter the market. The iBerry Auxus AX01 will be based on Android 4.0 ICS and is aimed at the budget segment, priced as it is at a convenient INR 5,990 for the Wi-Fi only model.

Specs aren’t anything to set new speed records, though are pretty decent for the price mentioned. The 7 inch tablet will have a 1 GHz Cortex A8 processor at its core with a dual Mali-400 processor for better graphics rendering capability that also supports Open GL 2.0.

The device will come with 1 GB DDR3 RAM, though the tablet’s capacitive display has a resolution of just 800 x 480 pixels. Further, the Auxus AX01 connects to the net via Wi-Fi, though the tablet also supports access to 3G networks using 3G dongles through mini USB port.

For storage, the AX01 would have 4 GB of on-board memory, which is expandable to 32 GB via microSD card. Another advantage with the AX01 is that the tablet is capable of outputing 1080p video playback via its HDMI port.

One can get the tablet either at the iBerry online stores or the retail networks and sales partners of iBerry.