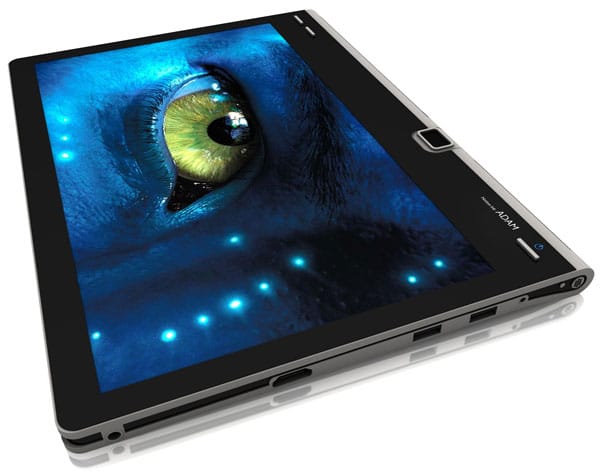 If you have been following the Good e-Reader Blog for the last few days you know that we have extensively covered the recent offering from Notion Ink, the Adam. We have done full hardware and software review, as well as our experiences with Adam in our second review. Today we would like to focus on some of the applications we have experience with and document our findings.

Quick Office is the stock Application that the Notion Ink Adam is bundled with to give you word processing, spreadsheets and other capabilities. This program is much akin to Open Office or Microsoft office, without the frills and gimmicks.

Our experience with this application thus far as been tremendously daunting. The individual applications will not give you the option to start a new document or spreadsheet from scratch. When you launch the application it takes you to a file viewer. If you have a USB or MicroSD card connected to the Adam you will get different options to browse the drives. The program on its own will not load up correctly.

The only way we found a workaround to begin the programs and to actually use them, was to load a doc file we created on our PC onto the USB drive. When you plug the USB into your Adam you have to access the document via the Sniffer application and click on it. When you tap on the file you will see compatibility with the word processor and then it can be opened. The Word application will load the document you just imported and you can now begin to actually use it and write.

eBooks and the Adam

The Notion Ink Adam has many shortcomings when it comes to eBooks and Comics. It was supposed to be shipped with the Longbox Comic Reader, but our shipped product did not have it. The Adam also failed to include any kind of eBook reading application.

The only way we were able to read eBooks on the Adam was with ebook reader APK files, that were on our recent post about Google Android Market Alternatives. We were able to install Kobo, Borders, Sony, Barnes and Noble android reader applications. The Amazon Kindle app also was able to install, but failed to verify our login and password due to a glitch. The essence of the error derives from the application trying to verify our user name and password to the internet and said there was no connection available. Now obviously we had a 3G connection via our SIM card and also Wireless access. Installing these applications allowed us to read and purchase books directly from the stores themselves and also download free books to get reading right away.

Our main concern with testing the ebook applications today was being able to side-load books in that we have downloaded from the internet and did not include Adobe DRM. We literary spend 3 hours trying every independant application to no avail. We found it absolutely impossible to side-load ebooks into the Adam. The closest we got to success was via the Aldiko android application. It has a feature to import ebooks into the library with an SD card. We followed the instructions exactly many times and it failed to read our microSD card with the ePub books on it. We tried FAT, FAT32 USB drives and different directory structures to no avail.

The Adam also does not internally recognize any eBook formats other then Adobe PDF, which is opened by Quick Office. Although we installed applications that have the importing feature for ebooks, the Adam would not associate the programs with the file formats. We did manage to get side-loaded PDF’s working via the Quick Office application, but in most cases the text was bold when the ebook itself was of perfect quality.

The Notion Ink Adam was a tablet billed as being able to take advantage of the full internet experience. The inclusion of Adobe FLASH and other internet standards was a huge selling point with the Adam Android Tablet. Right out of the box and after a few days Flash is non-existent on the tablet.

We tried loading various Flash games and either it told us to update our version of Flash or displayed garbled code. We also tried to view embedded Youtube videos and we were again prompted to download Flash. When we clicked on the link to update flash it either brought us to the Google Android Market (which the Adam cannot connect to) or the Adobe website.

After some trial and error we were able to find a recent copy of the latest version of Flash for Android 2.1 and 2.2 and it installed, but crashed the web browser.

So out of the box right now, the Adam will not display Adobe Flash content. We heard there is a way to get flash onto the device by following the unbricking tutorial post we did a few days ago. Using this method would bring your unit back to a state of factory default. Rumor has it that the most recent edition of Flash will be included. Although using this method with an Adam that is perfectly working is not recommended. We recommend it is best to wait for an official patch that Notion ink vowed would be incoming soon.

There has been much debate on the integrity of the 3.1 MP 185 degree swivel camera that the Notion Ink Adam comes with. First of all, a swivel camera is a brilliant idea and the hardware itself feels very firm and easily locks into position on a specific orientation.

We found through trial and error that the camera works about as fine as you can expect of a low megapixel camera. Through some experience the ruling was that if you tuned back the distance and maxed your settings with picture quality and resolution it did not look half bad.

As the video we being shot you notice that visually what you are seeing is not indicitive to the final product. Once you playback your video, it seems to significently see better resolution. The same is to be said about still pictures, as you see the live view, it looks very grainy, but the final product is ok.

There is also some options in the video camera that have no bearing on the adam technology. There are options to turn the flash on and off, but there is no built in camera flash with the Adam.

One of the features we neglected to go into detail about in our previous reviews of the Notion Ink Adam was the audio experience. The sound recorder application was beyond abysmal in practical application. It could perhaps be a problem with our built in microphone, but when we tested recording and then playing back the audio was distorted and had a high pitch to it. We would recommend to maybe use a different application to record your audio, the android markets are full of them.

The Stereo speakers on the Adam are a huge redeeming factor when you play back music with the audio player. The sound is crisp and clear, one of the drawbacks is that it does not have an EQ with the stock application Notion Ink bundles with it. I am sure there are better audio players on various Android Markets that should make this experience a bit better.

The headphone jack works in theory, but in practical application it was of low to mid level quality and we noticed some distortion coming through the speakers. We played around with the volume and different music files and it did not really matter to much. We do have very high quality noise cancellation headphones, so it could be due to the fact that the stock audio player does not have much in the way of an equalizer to balance the sounds.

Our Thoughts on day 3

Overall the Notion Ink Adam is a quality hardware build and has unique design elements that make up for some of the software shortcomings. Most of the software glitches can be found hopefully in the near future when we see firmware updates.

Through the tests we ran today, most of them were disappointing. The GPS application thought we were 10,000 miles away in China and nothing we could do could convince the machine otherwise. The fact that we could not side-load in ebooks was tremendously daunting, as we at Good e-Reader love our books and the ability to have control over our eBook experience. A great ability we discovered was the fact we were able to load in so many different e-reading applications! It indeed was a grand boon to everyone who deals with different ebook companies. People who have existing e-readers and have bought books from the company they deal with, should be able to make use of their purchased content.

The inability to run Flash or watch Youtube videos was one of the factors that made our internet browsing experience not up to par.

On a positive note, the boys at the Notioninkhacks managed to come up with an alpha version of a rooting procedure that allowed the Adam to shed its Eden GUI and adopt a more conventional android tablet experience. They even managed to get the official Google Android Market up and running. You can check their findings out HERE.

Now for some good news! Rohan the CEO of Notion Ink has emailed us and let us know in the next day or two a firmware update, along with instructions will be emailed to the account you used to order your Adam! Things that should be fixed? Flash, Bugs, Eden GUI, Crashes, and tons more!

Also more good news, Notion Ink has just confirmed that they are bypassing the official update to Google 2.3 and working on a Android 3.0 Honeycomb update. Also Notion Ink has also confirmed that some screens were damaged in shipping and that over the Chinese New Year one of the companies they deal with as stayed open to do new screens. This is why some people whom have pre-ordered the device still have not received it.

Update: A user let us know that an update for FLASH is available that allows you to play FLASH games, watch embedded YOUTUBE videos and everything else. You can download the most recent Adobe Flash build for the Adam HERE.

Update 2: Your Adam can view more content easy if you copy ebooks and other files to the device memory instead of the SD card.

Update 3: If you install Adobe PDF Viewer and Cool Reader from the Android Market (If you have rooted it) or with the APK files found on the internet you can import PDF files off of an MicroSD card or USB drive into Adobe PDF Viewsat and you can read ePub books on your MicroSD card as well.