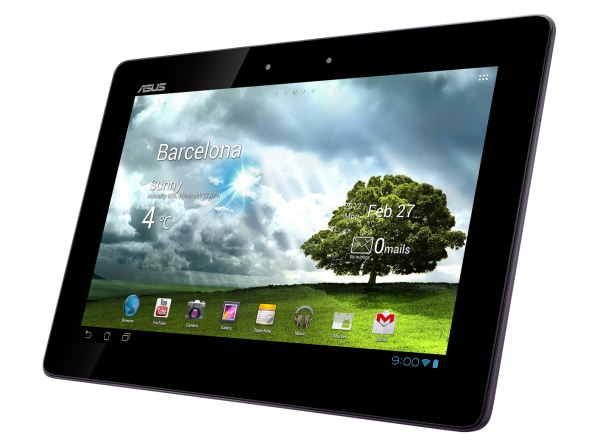 ASUS choose the CES event early in the year to let the world have a glimpse of what their new flagship tablet device will be like while making the device official at the ongoing MWC event in Barcelona. The Transformer Pad Infinity 700, as the tablet is named, will feature a high resolution Super IPS+ display with no less than 1920 × 1200 pixels rendering super sharp images. However, that surely will not be the only strong point of the Infinity 700 tablet as the device will also come with Corning Gorilla Glass scratch-resistant displays which incidentally has also been made standard fitment on all Inifnity series of tablet PCs.

The rest of the specifications include a 1.6 GHz NVIDIA Tegra 3 quad-core processor for the Wi-Fi only version of the Infinity 700 while the same with LTE capability will come loaded with a slightly downrated 1.5 GHz Snapdragon S4 MSM8960 Krait chip. This apart, what will be common for both the tablet species include 1 GB of RAM along with 32 and 64GB of internal memory. Buyers of the tablet will also be entitled to 8 GB of free online storage. The tablet will run Android 4.0 ICS and also includes a RF window strip running across the back of the device to enhance Wi-Fi/GPS reception. The tablet will also include a 8 megapixel rear camera with a F2.2 aperture while a 2 megapixel unit at the front will allow for video chatting or self portraits. The tablet will also be quite handy, with a thickness of just 8.55mm weighing only 586 grams. Also of course, the Infinity 700 will be compatible with the universal ASUS Transformer keypad that bumps the battery back time of no less than 16 hours.

Asus has stated the Infinity 700 tablets would reach markets by Q2 2012. Also, while pricing has been kept under wraps as of now, expect it to be n0 less than $599 for the entry level version.