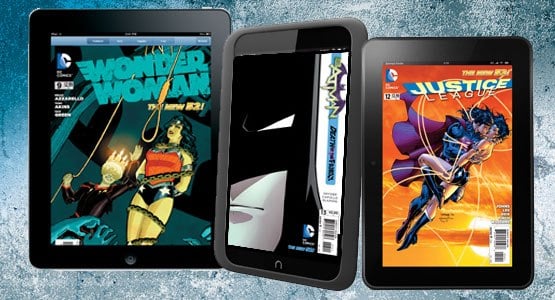 One of the iconic moments of recent comics history occurred at the February 2011 meeting of ComicsPRO, the association for comics retailers. During that meeting, DC co-publisher Jim Lee held up a sheet of typing paper and a piece of dental floss as a visual analogy for the relative sizes of the print and digital markets.

If he did that today, he could replace the dental floss with a piece of clothesline. The digital comics market has grown from an estimated $1 million in 2009 to $25 million in 2011, according to Milton Greipp of ICv2, and digital comics sales tripled in the first half of 2012 relative to the first half of 2011. Meanwhile, the print market has stayed relatively stable, at a total of $640 million, and Greipp predicts that digital comics will comprise over 10% of the comics market by the end of 2012. Some publishers are already reporting that; most recently, Robert Kirkman told ICv2 that digital sales of The Walking Dead have risen from 5% to 25-30%. In May, Ted Adams of IDW Publishing said that digital was 10% of his sales but given the current rate of growth, he expected it to be 20% next year. Since print sales aren’t shrinking, digital comics are expanding the market as a whole. Some key factors in the past year:

More comics are available digitally: The trend in 2011 was publishers announcing they would release comics digitally the same day as print. That’s still going on, and the market is expanding even more as Fantagraphics and Abrams, which specialize in more literary comics, and as Andrews McMeel, publisher of the newspaper strips Doonesbury and Dilbert, signed on to comiXology. In addition, a number of publishers, including Dark Horse and the manga giant Viz, have been working mightily to get their backlists digitized.

Small digital-only publishers are experimenting with new formats: Who says that comics have to be 24 pages long and come out once a month? Madefire, Aces Weekly, Monkeybrain, and Mark Waid’s Thrillbent are experimenting with different formats, offering fresh work by new artists that is made specifically for digital media—often using techniques that are unavailable in print. This is a small niche right now, but there’s potential for growth if they catch on as apps.

Classic comics are also coming to digital: Reprinting a classic comic in dead-tree format is an expensive and risky process. Digitizing it isn’t free, but it sweetens the deal. Panel Nine is packaging classic comics by Eddie Campbell, Dave Gibbons, and Hunt Emerson in beautifully designed standalone apps with lots of extras; Dave Sim is bringing Cerebus back via Diamond Digital; and even Classics Illustrated comics are available in both the Nook store and as their own app.

Digital appears to be expanding the market, not taking readers away from print comics: While the final numbers aren’t in yet, it seems that print comic sales were up in 2012. (Graphic novel sales were down but Greipp attributes that to the closure of the Borders chain.) For the moment, anyway, digital comics sales seem to be expanding the market. Anecdotally, many of these readers are lapsed comics readers who are being drawn back in by the convenience of digital and, perhaps, by the content as well. There’s something else going on as well: It’s no coincidence that it’s Robert Kirkman, proprietor of a major media property, who is reporting strong digital sales. Most people are more familiar with the movies and TV shows that spring from comics than with the comics themselves, and putting the comics in mass-market platforms makes it easier for the casual reader to connect with the original source material.

At the end of 2012, comiXology was the number 3 app in the iTunes store. That is a testimony not only to comiXology’s large market share but also to the size of the market as a whole. After all, the top stamp collecting app, or even the top fart app, didn’t make it into the top ten for the year. It seems that a lot more people are reading comics these days.

Digital comics come to the library: The digital comics distributor iVerse has been working on a digital comics program for both public and school libraries for some time, and it is poised to launch in 2013.

Comics based on games draw in new readers: Games and comics have a lot in common, but the audience for games is much larger, so it makes sense for comics publishers to tap into it. Dark Horse has had a great deal of success with its Mass Effect and Dragon Age comics, while Ape Entertainment sold a million Pocket God comics by marketing them in the same space as the game, in the app store; they are now following that up with comics based on Squids and Temple Run. Numerous creators and publishers told me over the course of the year that they were finding new audiences at gaming conventions, and that trend is likely to continue over the next few years.

Children’s comics remain a puzzle: While digital comics have exploded, marketing them to children has proved to be a tougher sell. ComiXology and iVerse both have children’s comic apps, but they don’t seem to have taken off. Single-property apps, such as Pocket God and the Archie Comics app, seem to be doing better, but there’s room for growth here.

DRM is here to stay, at least for a while: Everybody complains about paying full cover price for a comic they are only renting on comiXology or the e-reader platforms, but it seems to be the nature of the comics world that people still pony up anyway. As much as readers would like to see lower prices and DRM-free comics, the economic pressure doesn’t seem to be there.

… except on Kickstarter: As creators finance their latest books via crowdfunding sites such as Kickstarter and IndieGoGo, most are offering digital copies as lower-level premiums. Most of those digital copies are simple downloadable PDFs, which may change the shape of the digital market eventually, as DRM-free digital comics from prominent creators become widely available.

Where’s the money? A number of the experimental digital-first comics are free, and creators such as Thrillbent’s Mark Waid have said up front that they want to figure out the model first and then think about monetizing it. 2013 will be the year the rubber hits the road, as creators start figuring out ways to get paid for their work.

To infinity—and beyond! Digital comics will continue to grow in 2013, no doubt about it. The number of people who own iPads, Kindles, and nooks is much higher than the number of people who read comics, so the capacity for exponential growth is still there, at least for a little while, but realistically it wouldn’t be surprising if the rate of growth were to slow a bit in the coming year. Still, by the end of the year we should be able to replace that dental floss with, if not a posterboard, at least a business-size envelope.