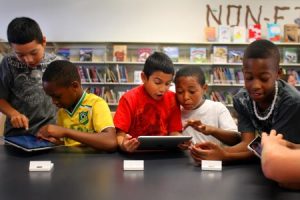 eReading was supposed to be a benefit that revolutionized reading, stripping away barriers such as access to books and bookstores, high prices of new titles, and the inconvenience of carrying books around. Some of the original critics of e-reading were parents of young readers who worried that device-based access to books would lead to opting for other digital activities besides reading, and now, a report by Nielsen Book has confirmed that those fears were somewhat grounded.

According to an article for UK-based The Bookseller by Joshua Farrington, “‘Understanding the Children’s Book Consumer in the Digital Age,’ Nielsen Book’s latest research project, has found a significant fall in the number of children who read or are read to on a weekly basis, with the proportion of occasional and non-readers among children aged under 17 now at 28%, rising from 20% in 2012.”

Farrington continued:”The research shows that children’s reading is being affected by alternative activities, such as playing games, watching videos on websites like YouTube, and texting. During the past year, children’s access to tablets more than doubled over the previous year. The devices are being used for a range of activities, but reading is considered one of its least important uses. Only 20% of children use tablets for reading e-books, while 6% use them to read magazines and comics. Jo Henry, director at Nielsen Book (pictured), said: ‘This dramatic drop in engagement with reading (seen in the context of an 8% drop in the number of books bought for those aged under 17) in the first half of 2013 will give pause for thought for anyone involved in children’s publishing, particularly at the older end of the market, which has seen the greatest decline.'”

The paradox is that the number of children reading digitally has increased even while those who do not read in any format has also. In addition, a growing number of students in different age groups report that the only format they read in is digital.

So is the device actually to blame? Among the students who opt to use tablets for something other than reading when given the chance, would those students really read a book if they were provided with a print edition, or would they simply shun the activity altogether in favor of something they found more entertaining? While it is easy to attempt to correlate that research findings with the availability of tablet-based activities, the link between entertainment and education cannot be attributed quite so simply.