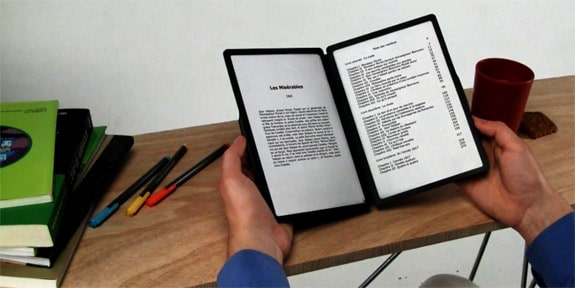 Samsung and a number of other companies are working on or have announced foldable phones. They are around the same size of a smartphone, but can be unfolded to be the size of a tablet. TCL has just developed DragonHinge technology that acts as a mechanical housing for foldables “allowing them to fold and bend in support of a variety of use cases.” Meanwhile LG has just developed a dual screen case for their new flagship smartphone that lets you watch a movie on one screen and search IMDB on the other. With all of this hinge technology in the works and dual screen/foldable phones being the next big thing, will we see a dual screen e-reader for ebooks?

There are a number of dual screen e-readers that have been released over the years. The Encourage Edge and Pocket Edge were the breed of devices that came out almost seven years ago. They had an LCD screen on one side for Android apps and the other had an E-Ink display, they were really ahead of their time.  Gvido released a $1,200 dual screen 13.3 inch sheet music reader a couple of years ago, but it only reads PDF files. There was also the eOnebook out of Japan that had two six inch e-ink screens, but it only worked with Manga and you could not sideload anything. You can say that all of the past and present e-readers with a dual screen are single purpose devices, but the real money is with multipurpose.

The underlying technology for a new breed of dual screen e-readers is available right now, for an established company or a startup to create something innovative. E-Ink unveiled a prototype last year that features a 10.2 inch screen that open and closes like a real book. The the hinge technology needs some work, but I am sure E Ink would create something for the right vendor or they could license the tech from Gvido, since they have a patent on their hinge or even get it from TCL.

I am fairly certain that a dual screen e-reader that ran Android and did not cost more than $500 would attract all sorts of media attention or capture the imagination of anyone who has been holding off upgrading their current e-reader and waiting for something really new and groundbreaking.

Will we see a dual screen e-reader in the next few years? How much would you pay for one?