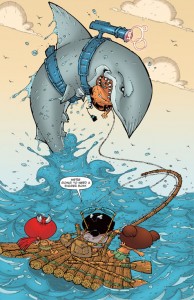 There are probably a good number of dads hoping to wake up to a new tablet this morning, and Ape Entertainment has some free content to go along with them. The creators of the bestselling iTunes app game Pocket God has brought some comic book fun for the pygmy-loving gift giving crowd.

“Pocket God Comics issue No. 1 ‘The Gem of Life – Part One’ starts with Ooga questioning the Gods and their relentless Pygmy pounding, but the gods strike back, taking away the gift of immortality bestowed upon the islanders and forcing Ooga and the gang on a dangerous mission to recharge the Gem of Life, which fades a little more with each new Pygmy death,” stated a press release issued by the comic creators.

The Pocket God digital comics line won the Best Comic App 2011 category from the Best App Ever Awards, and the game that the comics are based has racked up some equally impressive accolades for game apps and sales. In the world of digital comics, Pocket God’s reading content is some of the most successful digital comics to date.

“Ape hopes that Pocket God Comics will inspire new readers to discover the exciting world of comics through their local comic book shops.”

Dads who don’t want to see their new toys disappear down the hallway with the kids can also take advantage of some new digital content, courtesy of Scholastic Media. The world’s largest children’s publisher has also become known as one of the top industry leaders in children’s digital content, and on the same day that Pocket God released its free comics, Scholastic announced its partnership with LeapFrog to bring the award-winning and bestselling Magic School Bus series to LeapPad and Leapster Explorer devices.

“We are very excited to bring The Magic School Bus brand to our award-winning multimedia platforms for the first time,” said Jill Waller, Vice President of Multimedia Learning at LeapFrog. “It’s a great way to reinforce the subject of science with fun and engaging learning experiences that help kids reach their potential.”