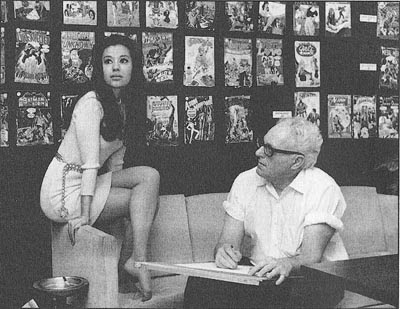 Authors of comic books and graphic novels have long relied on the concept of the ashcan print, a brief book of about sixteen pages or so that will illustrate for the distributor what the author/illustrator team can do. This small effort is the necessary foot in the door to be able to go on to produce lengthier works. It can be likened to a query for fiction writers trying to catch the attention of a literary agent or publishing house.

While many writers of both fiction and non-fiction have been able to enjoy the benefits of the digital world, whether by submitting manuscripts to agents in e-reader-compatible format for consideration for traditional publishing, or establishing themselves as self-published authors with a small-but-growing loyal following of readers, the electronic age has not caught up as readily with the needs of graphic novelists.

Rob Graham, author of Keeper of the Gate, a dark horror adult fiction with crossover potential for young adult readers, started out in publishing with comic books and graphic novels but quickly discovered that the new routes opening to authors interested in self-publishing, especially the ability to format a manuscript for e-readers and sell it through online retailers, hasn’t quite caught up with graphic novels.

A quick glance through the reader reviews on Amazon’s Kindle store under any given randomly selected graphic novel title is that the drawings are just too poor to come through on Kindle. Many commentators, however, were quite pleasantly surprised as they were perhaps a little low in their expectations on how the graphics would format to the e-reader.

However, with the literally hundreds of thousands of Kindle titles available, only just over four thousand graphic novels are available for the Kindle e-reader, and about seventy-eight titles were listed under the search, “comics books for kids.” A typical juvenile comic book consumer owns more than that by the time he’s old enough to pick up an e-reader.

One of the complaints from reviewers spoke to the inability of the text to come through. The formatting of that particular title required the reader to zoom in and then arrow over to every block, which would be like traditional comic book or graphic novel readers needing to run a handheld magnifying glass over every page in order to read the text and see the complete artwork.

A search through the Nookstore didn’t turn up any digital graphic novels, which is surprising given that the Nook Color advertises such a high-graphics capability and offers many kids books with full-color illustrations, meaning the mechanism is there but that the market hasn’t caught up.

And until that interest and technology can catch up, authors like Rob Graham are left shifting their focus to the storytelling aspect of their craft, abandoning the cutting-edge art that so often defines the genius of a graphic novelist in order to bring to life at least one part of who he is as a writer: just the words.