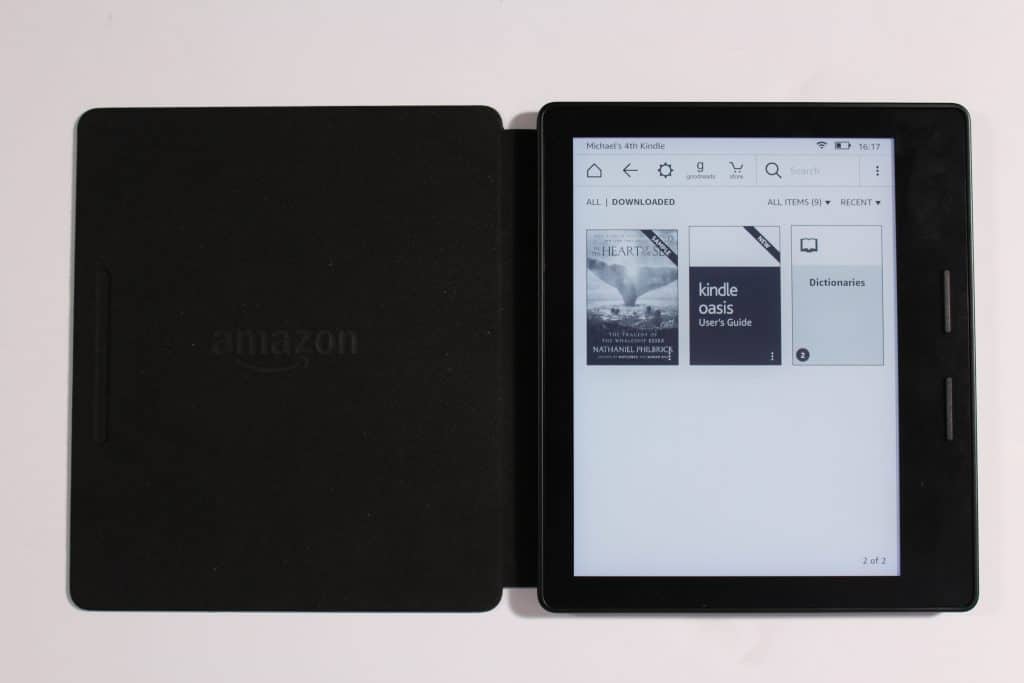 The Amazon Kindle Oasis is very unique e-reader and the design is quite different than the Paperwhite or the Voyage. It is the lightest dedicated reader that Amazon has ever released and the accompanied case has its own battery source. Make no mistake, the Oasis is very expensive and costs around $280 for the entry level model. Should you upgrade to the Oasis if you have an older device?

The Amazon Kindle Oasis features a six inch capacitive touchscreen display with a resolution of 1440 X 1080 and 300 PPI. The e-paper panel is utilizing e-Ink Carta HD and the screen is completely flush the bezel.

What makes the Oasis standout compared to previous Kindle models is that it has a built in gyroscope. You can easily switch orientations by simply flipping the device over. There are two physical page turn buttons on the right hand side and they do not provide haptic support like the Voyage does. The page turn buttons provide a great amount of synergy with the gyroscope because it makes the Oasis compatible with people who are left handed.

The one thing I really dig about the Oasis is that it was designed to offer the best in class night reading experience. The screen is noticeably brighter than previous models and there are no bleeding or splotches alongside the edge of the bezel. How did Amazon manage to do this? The Oasis employs 10 LED lights that are spread out evenly at the top and bottom of the screen. In retrospect the Kindle Voyage has 6 LED lights, while the Paperwhite has 4.

The Oasis is touted to have 1 month of battery life and the built in case that has a dedicated battery as well. If you have the e-reader inside of the case and plug it into a wall charger or computer, both devices will charge at the same time. I have noticed that the Kindle battery will drain first and then once it reaches around 10% to 20% it will switch to the cover charger.

One of the downsides of the 10 LED lights is how much it drains the Oasis battery. Over the course of 15 minutes while the screen was at maxmium brightness it went down 12%. If you read at night for few hours, the battery will likely completely drain on the 3rd evening.

To be honest, I am not a huge fan of the asymmetric design. It’s extremely thin on one side (only 0.13 in / 3.3 mm) and transforms into an ergonomic grip on the other. It’s where page turn buttons are positioned. Therefore, by holding the device in one hand, you can both turn the page back and forward. 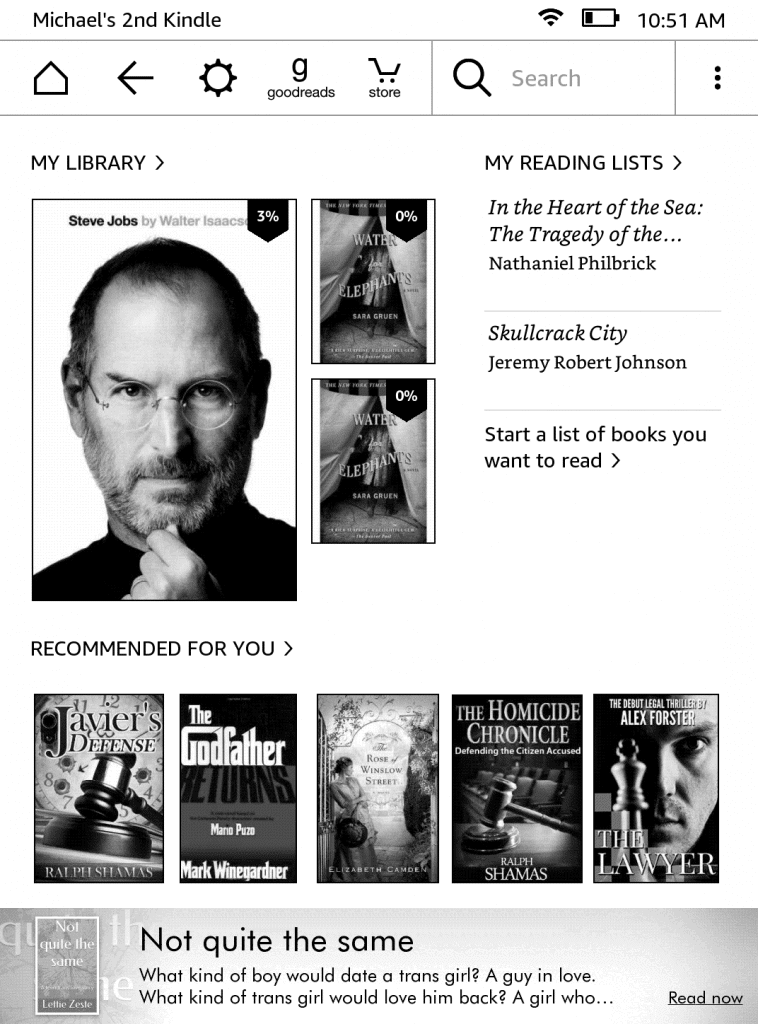 In Febuary 2016 Amazon pushed out a new firmware update for the Kindle Voyage, Kindle Paperwhite 2, Kindle Paperwhite 3, Kindle Basic and the Oasis. This is one of the biggest enhancement packages in years and dramatically changed the layout of the home screen.

The UI on the home screen has also received a total redesign.  Amazon has removed the brightness button for the front-lit display and added titles underneath some of the icons. GoodReads and the Kindle bookstore both say “Store” and “GoodReads.”

In order to change the brightness level there is a new gear button on the main navigation bar. This will allow you to adjust the brightness of the light, but also put the e-reader in airplane mode, by automatically disabling internet access. You can also quickly sync for new content, whereas before the sync feature was buried in sub-menus.  Additionally there is also a battery level indicator on the Oasis and if you have it connected to the case it also displays the battery level of that too.

If you are not a fan of the new home screen layout there is a way to disable it in the settings menu. We even included a video tutorial that walks you through the entire process.

The software on the Oasis is basically the same as all of the modern Kindle e-readers. The only thing I will mention is the internet browser is still labeled as experimental. 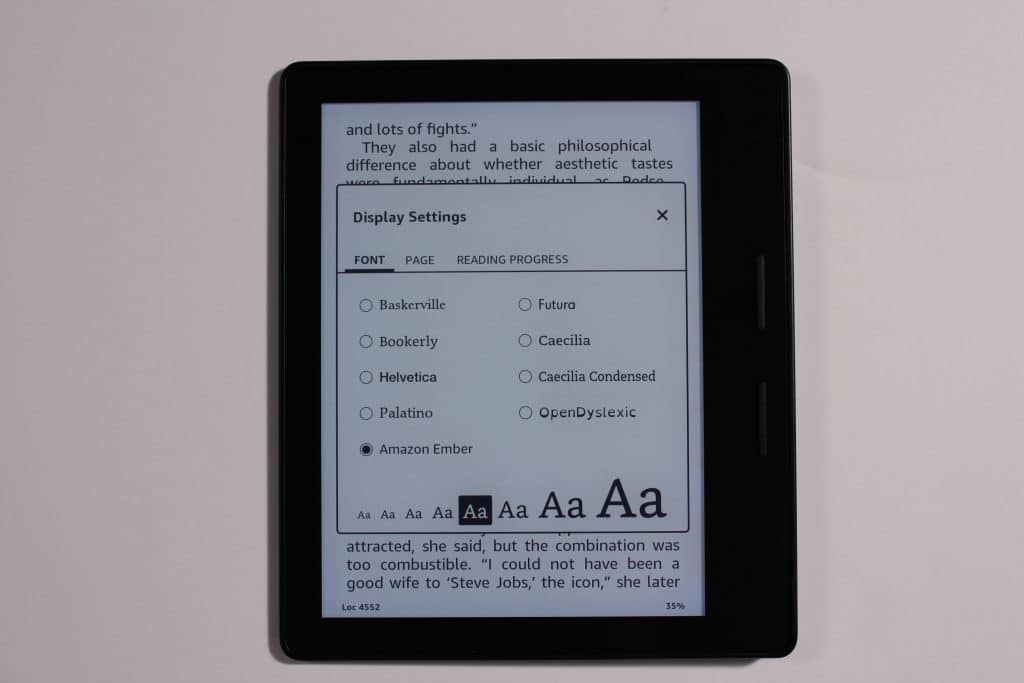 Amazon has developed a completely new font for the Oasis. It is called Ember and takes advantage of the 10 LED lights to make it easier to read at night.  I found that it is very similar to Helvetica, which is the preferred font for serious readers.

The e-reading experience on the Oasis is quite excellent. Using the page turn buttons is very intuitive and turning the pages of the book are lightning quick. If you are not a fan of pressing on the buttons to turn a page, you can also also tap or gesture to go forward or backward in an e-book or PDF file.

If you tap at the top of the screen while in an e-book you will get a number of options. You can change the font type or the font size and there are two other tabs which lets you configure the linespacing, margins and how much text is displayed on the screen. If you are reading an e-book and drag your figure across the screen it will actually reposition the text, either centering it on the screen or making it lean to the left or right.

One of the most compelling features of the Oasis, and Kindle e-readers in general is that you can make notes, highlights, annotations, look words up in the dictionary or Wikipedia. My favorite feature is the translate mode, which will automatically convert a selected body of text from any language to any language.  Not only is this feature available in any e-book that you purchase or sideload, but also PDFs’. I heard that Amazon makes the translation feature possible leveraging technology from Microsoft.

If you are a fan of PDF files on your e-reader, the Oasis does a fairly good job. There is a preview pane on the top left hand corner which helps orient you on where you are in the document when you are zoomed in. The PDF rendering engine has been refined so when you pinch and zoom a document the entire page is refreshed very quickly.

According to FCC documents, the Oasis actually has Bluetooth and text to speech functionality, but Amazon has not enabled these features yet via a firmware update. Maybe in the future they will allow it to connect up to series of new accessories.

The Kindle Oasis e-reader is the most expensive six inch device Amazon has ever released and retails for $359 for WIFI/3G and Special Offers or you can get the entry level model for $289 with Special Offers. It certainly is not pocketbook friendly, but if you need the latest and greatest it does offer new features never seen before on an e-ink reader developed by Amazon.