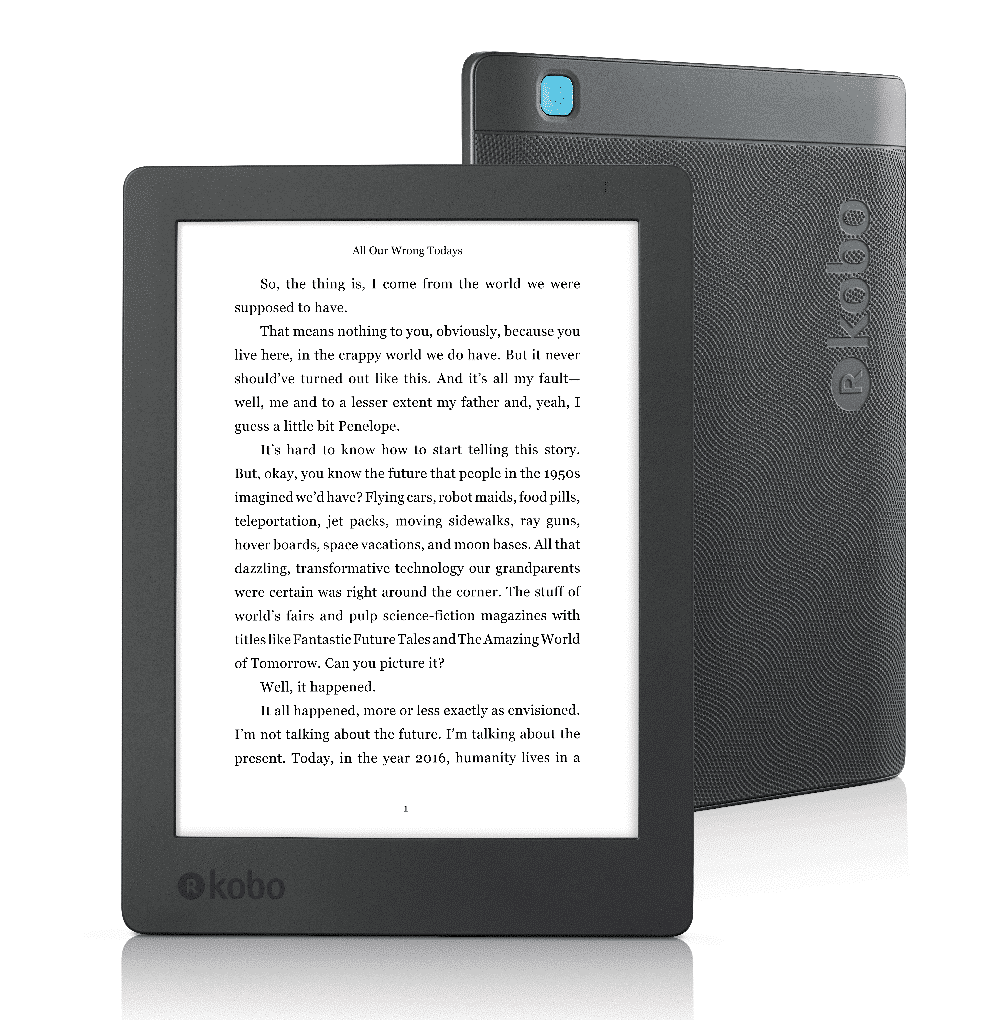 Kobo has been developing e-readers since 2010 and the company has just announced the best one yet. The Aura H2O Edition 2 is waterproof, so you will be able to take it to the beach or the bathtub and not have to worry about totally submerging it in water. This is also useful if you are the type of person that often spills coffee or tea all over the place. 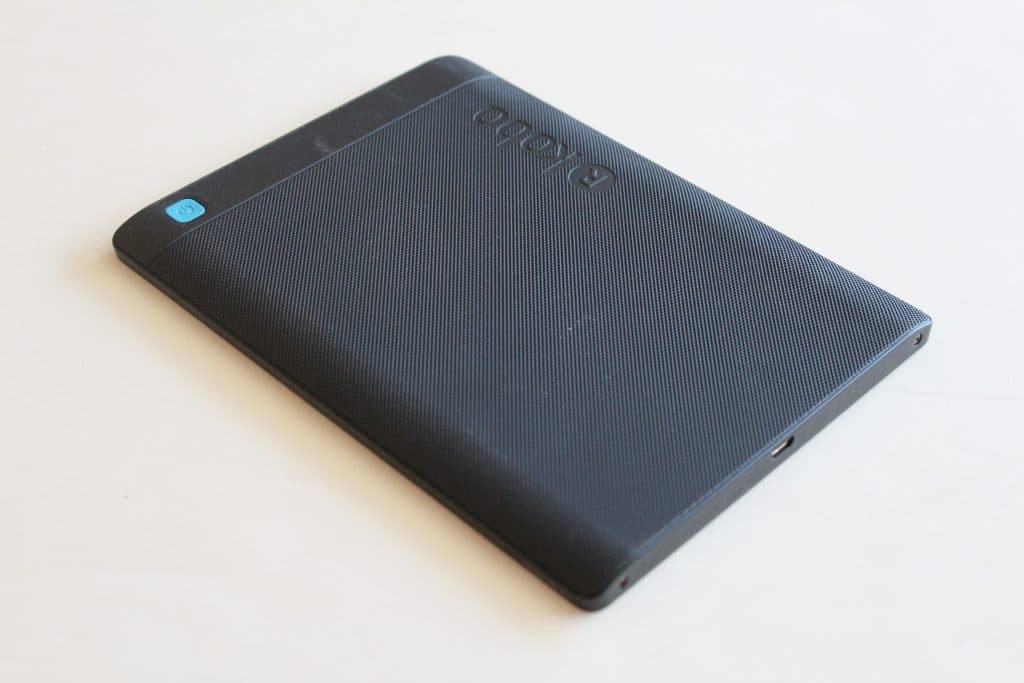 The Kobo Aura Edition 2 features a 6.8-inch E-Ink Carta Display with a resolution of 1430×1080 and 265 PPI. The screen is sunken, which means they are employing an IR display, instead of a capacitive touchscreen.

The vast majority of Kobo e-Readers have frontlit technology that allows you to read in the dark. Traditionally there are LED lights embedded into the bottom of the bezel and they project light upwards across the screen. Unlike smartphones and tablets that are backlit, this leads to less eyestrain during marathon reading sessions.

There are two different aspects of the ComfortLight PRO lighting system. The first is the traditional white screen, which you can control the overall illumination settings via a slider bar. You also have the option to turn the screen from white to various shades of orange. You can initiate it manually or have it turn on automatically at certain times of the day.

Kobo has attained the prestigious IPX8 rating and is waterproof for up to 60 minutes in up to 2 metres of water. This is useful for reading in the bathtub or if you spill coffee on the device. Additionally, if you take this reader to the beach and get sand on it, you can just wash it off.

Underneath the hood is a Freescale 1GHz processor and 512MB of RAM, the same as you get with most new Kindles. There is 8GB of internal storage and there is no publicly available SD card. Instead, the SD card is grafted to the circuit board and powers the Linux operating system. There is no easy way to remove the back platting, because of the waterproof design.

On a physical level, the Kobo Aura H2O edition 2 bears a strong resemblance to the Kobo Aura One that the company released last year. The power button is on the back and it has the same contour design pattern, which makes it easier to grip with one hand. I honestly really dig the way Kobo removed the power button from the very top of the device and put in on the back. It feels more natural to turn it on and off this way; most Kindle Fire tablets have the power button positioned in such a manner. 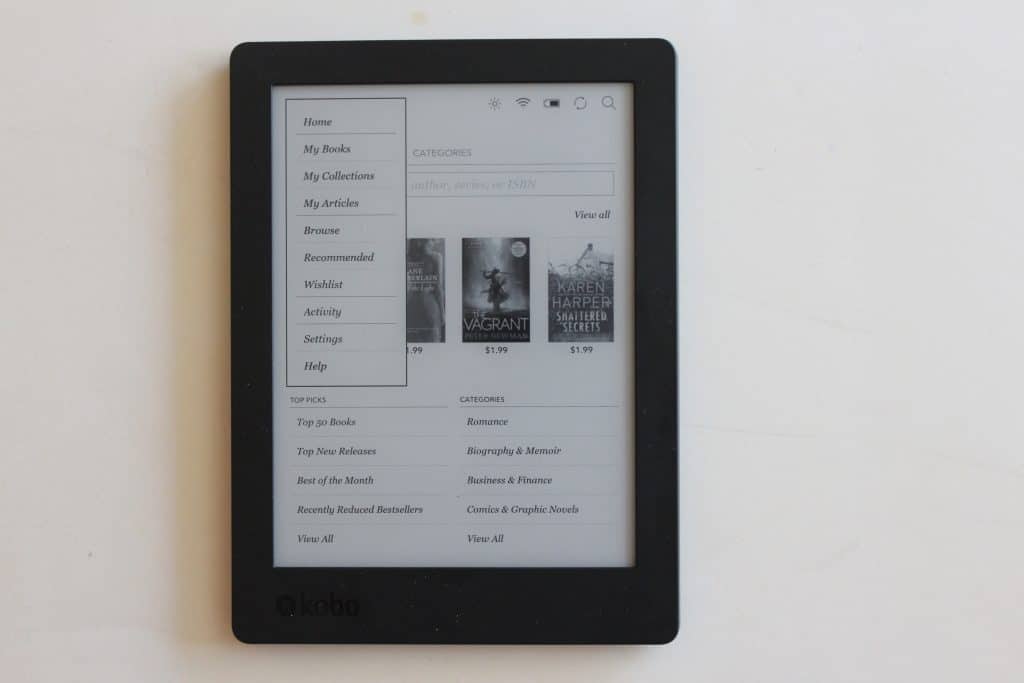 In February 2017, Kobo changed their entire e-Reader software experience and the entire menu structure, navigation; shopping and home screen was brought into the modern age.  The primary intention behind this sweeping new change was to take advantage of higher resolution displays and a greater amount of PPI.

The intention behind this new experience was to make the e-Reader more intuitive and robust. The main home screen comprises of the last few titles you have opened from the library and recommend titles from the store.  The store loads quicker and there is less images to load, the company eliminated most of the carousels, which contributed to things slowing down. You can launch the store right from the home screen now and within two clicks, you can make a purchase or download a sample.

The settings menu was moved from the top right hand corner to the top left, this made room for the WIFI, front-lit display, sync button and search features on the top right hand side. It also added more room for breadcrumbs, which shows you exactly where you are when you are browsing around.

I have been reviewing Kobo branded devices since they first started making them and I have to admit that I was not a fan of the elimination of the dynamic home screen. The old system was solid because the entire home screen acted as a giant shortcut for common tasks. Instead of constantly navigating to the settings menu and beta features to launch the internet browser, it just appeared on the home screen, which saved time.  After using the new UI for a couple of weeks I am sold, the development is a tour de force and makes the entire e-ink experience more robust, everything just loads quicker.

One of the big downsides about the Kobo Aura H2O Edition 2 is that you cannot borrow e-books from the public library right on the device. It does not have Overdrive built into it, which is concerning because this was a major selling point for the Kobo Aura One. 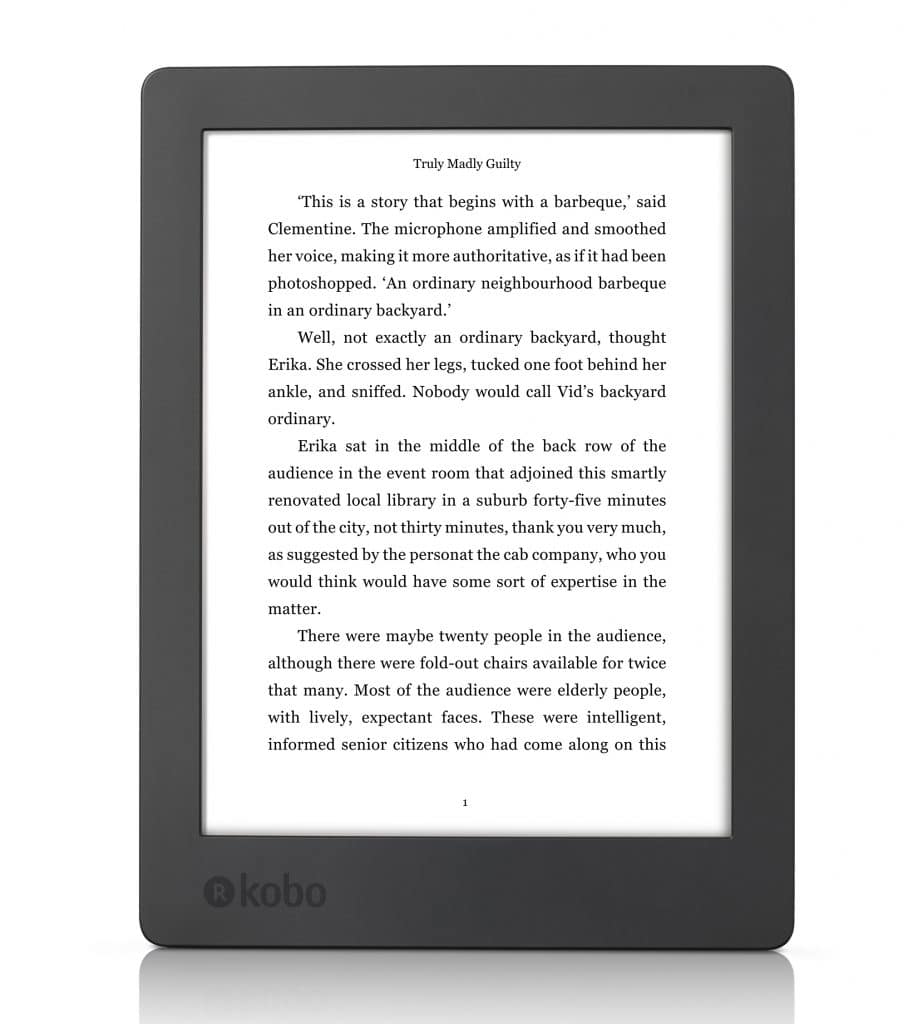 Kobo does an amazing job in making their e-readers appealing to both casual and hardcore users. They have plenty of advanced options that the competition simply cannot match, such as the ability to load in your own fonts. This is useful if you want to load in stuff like Bookerly or Ember, two fonts Amazon developed with e-readers in mind.

Most e-readers and e-reading apps have a few different preset options to change the linespacing, margins, or font size. Kobo does things differently, they also have a bunch of sliders that allow unparalleled flexibility in determining how much weight you want your fonts to have and configure the margins and line spaces.

The Kobo Aura H2O Edition 2 was designed to excel at reading the two most popular electronic book formats, PDF and EPUB. They also have support for manga, graphic novels and comic books with CBR and CBZ, so users will be able to download them from the internet and easily load them on their reader. When it comes right down to it, it reads: EPUB, EPUB3, PDF, MOBI, JPEG, GIF, PNG, BMP, TIFF, TXT, HTML, RFT, CBZ, and CBR.

When you are reading a book, you have a number of options you can employ. Aside from font and customization options, you can long-press on a word and get an instant definition of it. If you speak another language, you can look the word up in Japanese, Italian, German, Dutch, and many more. When long pressing a word, you get an anchor that will allow you to select a single word, sentence, or entire paragraph. You can then highlight it or add a note.

One of the drawbacks of the H2O is the PDF experience. Anything that relies on pinching and zooming is lackluster. It takes at least five to seven seconds for the page to render. The larger the file, the more time it takes for it to load.

The Kobo Aura One is the best e-Reader that Kobo has ever made and the H2O Edition 2 is a close second.  This e-Reader will be available for $199.99 in Canada and $179.99 US. It will be available at Chapters/Indigo and the main Kobo website on May 22.nd .  The device will also be available as of May 22 in the US, the UK, Italy, France, the Netherlands, Spain, Belgium, Switzerland, Japan, and Turkey; as of July in Australia, New Zealand, and Philippines; with Mexico and Brazil to follow later this year.

If you have purchased a Kobo e-Reader sometime within the last two years, this is not an essential upgrade. The only thing that it really has going for it is the new RGB lightning system and the new streamlined design. In terms of the new UI and software experience, it was pushed out to most Kobo branded devices a couple of months ago.