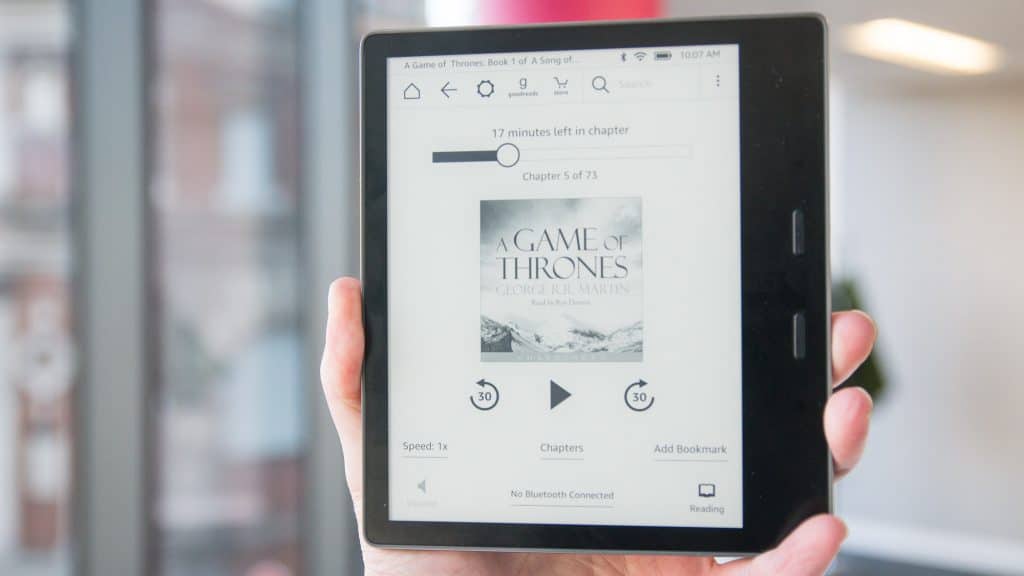 The new Kindle Oasis features a large seven inch screen, is waterproof and can play audiobooks over WIFI. It is also one of the most expensive Amazon branded devices to come out in a long while, it retails for $249.99 for the 8GB model and $279.99 for the 32GB model and $349.99 if you want the 3G version. The big questions, is will you buy this model?

The second generation Kindle Oasis features a 7 inch capacitive touchscreen display with resolution of 1680 x 1264 and 300 PPI. It includes includes 12 LEDs for uniform lighting across the screen and allows you to read in the dark. The Kindle Voyage was the first Kindle with an ambient light sensors that adjusts the brightness as you move from room to room, or from outdoors to indoors and the all new Oasis has the same functionality.

This is the first waterproof Kindle ever released and it carries a IPX8 rating, which means you can use it in the bathtub or the beach. This was one  of the most requested features from users who wanted to read ebooks on the their Kindle anywhere and not have to worry about spills.

The Kindle Oasis utilizes a brand new dual-core 1GHz processor with 512MB of RAM and this results in an e-reader that is tremendously robust. Navigating the menus, library or accessing the store is lightning quick. It is very likely that Amazon has made some software enhancements in conjunction with hardware upgrades.  There are only two storage options available, 8 GB which will store around 15 audiobooks and a mix of e-books and a 32GB version. I would say if you are a casual listener you can get by with the cheaper version, but hardcore readers and listeners might want to shell out the extra cash and buy the model with more memory.

The big selling points behind this e-reader is being able to buy and listen to Audible audiobooks. You can connect up a pair of wireless speakers or headphones. The Oasis is incompatible with your smartphone, so you can’t take advantage of your iPhone or Android internal speakers.

A big screen, waterproof and Bluetooth are the big draws. Still, this e-reader is really expensive compared to the Nook Glowlight 3 and the Kobo Aura One.  Will you buy one or purchase the Paperwhite on Black Friday, which will cost only $89.