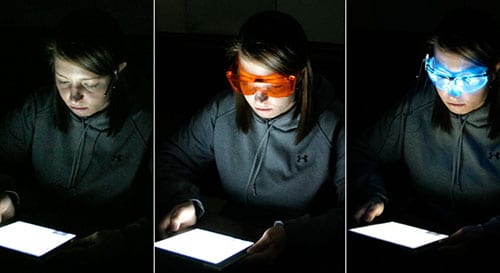 There is no denying that for long term reading sessions on an electronic device, e-readers are the way to go. A new study from the Lighting Research Center at Rensselaer Polytechnic Institute shows that a two-hour exposure to electronic devices with self-luminous “backlit” displays causes melatonin suppression, which might lead to delayed bedtimes, especially in teens.

In order to simulate typical usage of these devices, 13 individuals used self-luminous tablets to read, play games, and watch movies. “Our study shows that a two-hour exposure to light from self-luminous electronic displays can suppress melatonin by about 22%. Stimulating the human circadian system to this level may affect sleep in those using the devices prior to bedtime,” said Mariana Figueiro, associate professor at Rensselaer and director of the LRC’s Light and Health Program.

So what is melatonin and why is it a big deal? Melatonin is a hormone produced by the pineal gland at night and under conditions of darkness in both diurnal and nocturnal species. It is a “timing messenger,” signaling nighttime information throughout the body. Exposure to light at night, especially short-wavelength light, can slow or even cease nocturnal melatonin production. Suppression of melatonin by light at night results in circadian disruption and has been implicated in sleep disturbances, increased risk for diabetes and obesity, as well as increased risk for more serious diseases, such as breast cancer, if circadian disruption occurs for many consecutive years, such as in nightshift workers.

The research team established that duration of exposure and the distance between the eye and the display (which determines the amount of light reaching the back of the eye) affects melatonin levels. Melatonin suppression after a one-hour exposure to the tablet was not significantly affected. However, after two hours of exposure, there was significant suppression.

Many people who are serious and voracious readers often turn to e-readers because they do not emit light that causes these sorts of problems. The next generation of e-ink with glowing functions are front-lit instead of back-lit. There has been no long-term studies on the new types of technology found in the Kindle Paperwhite, Kobo Glo, or Barnes and Noble Simple Touch with Glowlight.