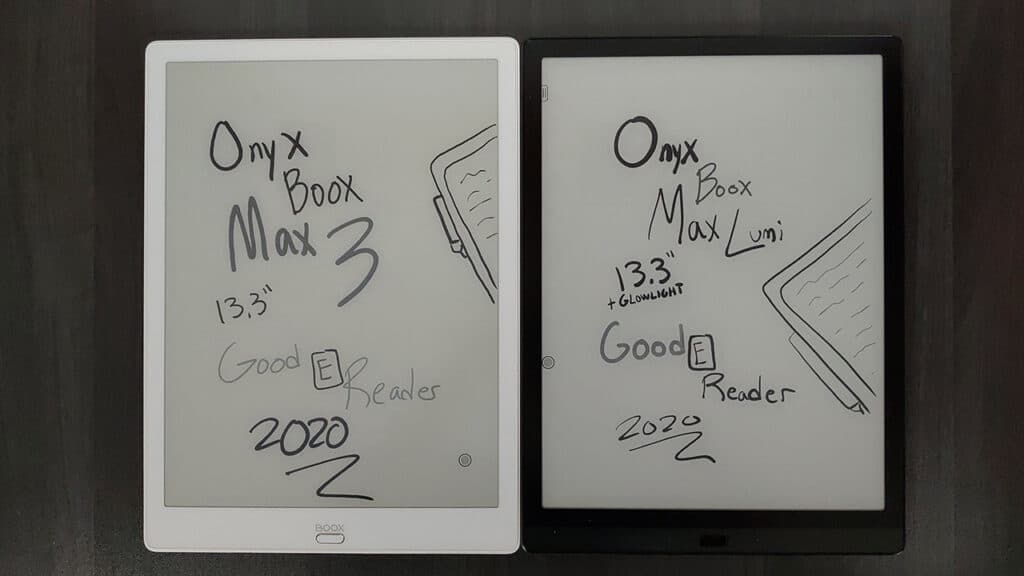 The Onyx Boox Max Lumi and Onyx Boox Max 3 are both 13.3 inch digital note taking devices that can read A4 PDF files and other documents. This is basically the same size as an 8.5×11 piece of paper, so these are also perfect for newspapers, magazines, manga and ebooks. The Max line was originally developed to take notes, freehand draw, edit PDF files and provide all of the functionality of a multipurpose tablet, but with an E INK screen. What are the key differences between the Lumi and Max 3?

The MAX 3 features a 13.3 inch flexible E Ink Carta display panel with a resolution of 2260 x 1650 at 207 PPI. It has a WACOM digitizer layer for stylus support, for up to 4,096 degrees of pressure sensitivity and palm rejection technology. It does not have a backlight system. It retails for $779.

Underneath the hood is a Qualcomm Snapdragon 625 2 GHZ octa-core processor, 4GB of RAM, 64 GB of storage, Wi-Fi (2.4GHz + 5GHz) and Bluetooth 4.1. There is an HDMI port so you can connect the MAX3 up to your laptop or PC and have it act as a secondary monitor. There are 4 different types of refresh mode when attached to your PC, so you can browse the web, look at pictures,  or program.  It also has USB-C port and has support for OTG out of the box, so you can attach a keyboard, mouse, a foot pedal for musicians or other devices, with no drivers needed.  It is powered by a gigantic 4,300 mAh battery, which is good for a few weeks, it also has support for Quick Charge 3, so you can charge it up to full in under two hours. Dimensions are 309.8*227.8*6.8mm.

The Onyx Boox Max Lumi features a 13.3 inch E INK Mobius and Carta HD display, with a PMMA flat cover-lens. The screen is flush with the bezel and it is made of glass. The resolution is 2200×1650 with 207 DPI. It also has a WACOM layer for interactions with the stylus and has 4,096 degrees of pressure sensitivity. The Lumi has the same stylus as the MAX 3. 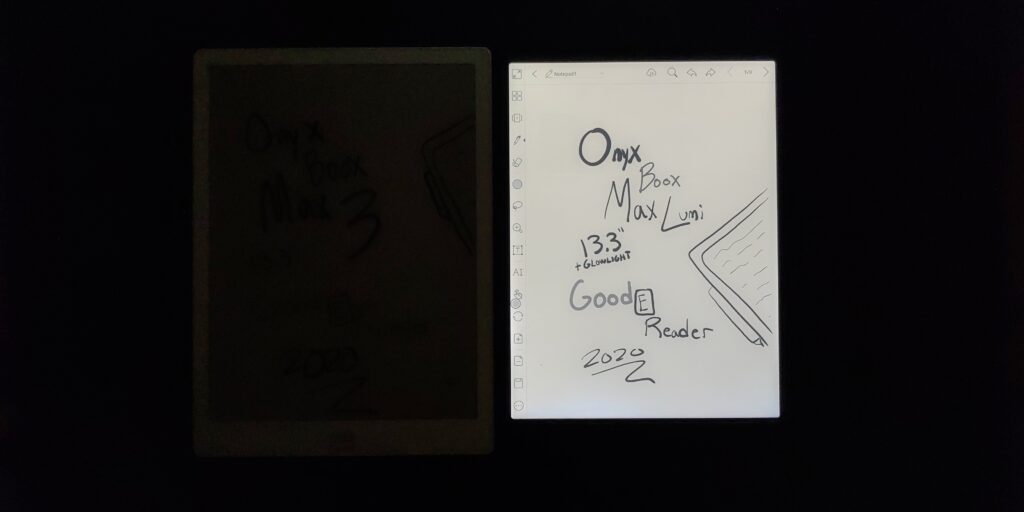 The Onyx Boox Max Lumi is the first 13.3 inch e-note that has a front-lit display and color temperature system. There are 36 LED lights total, 18 white LED lights and 18 amber LED lights. The light distribution is absolutely insane, there is no blotches or dark areas of the screen, when brightness is cranked to the max. It retails for $859.

Underneath the hood is an Qualcomm Snapdragon 636 processor with eight custom Kryo 260 cores at up to 1.8 GHz, an Adreno 509 GPU, 4GB of DDR4X RAM and a whopping 64GB of internal storage. You will be able to connect up to the internet via Wi-Fi (2.4GHz + 5GHz) and also has Bluetooth 5.0. You will be able to connect the Lumi to your PC or MAC with the USB Type-C port, this port also supports OTG for driver free accessories, such as a keyboard. It is powered by a giant 4300 mAh battery, which provides up to six weeks of standby mode. Quick Charge 4.0 can provide 2/3 of the battery power to the Lumi in just two hours. There is a fingerprint sensor, which allows you to lock or unlock the device, which adds a bit of security from unauthorized access. 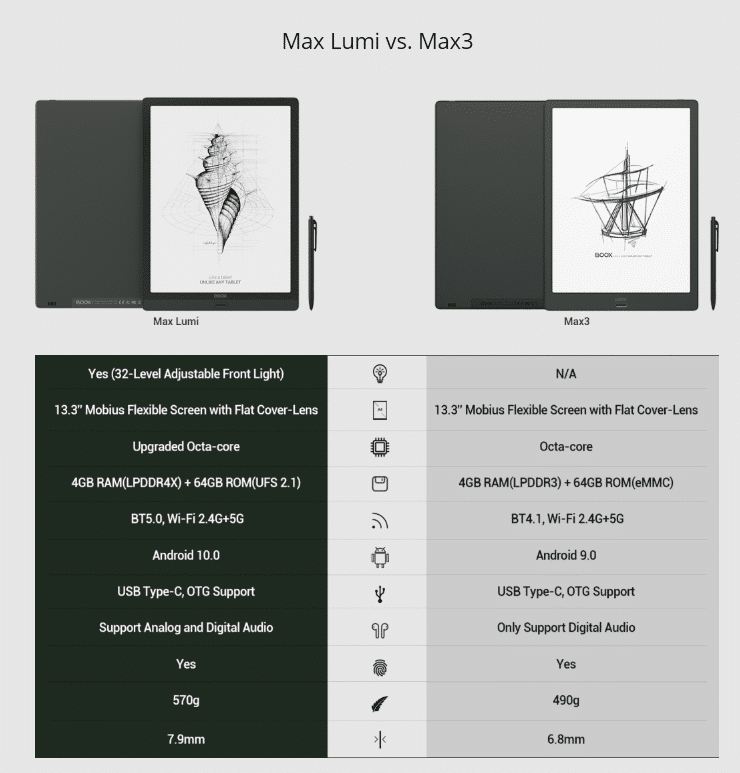 What are the big differences between the two units? The MAX 3 has Android 9, the Lumi has Android 10. The Lumi has Bluetooth 5.0, while the MAX has 4.1. The Lumi is using DDR4X RAM, while the MAX 3 has DDR3. The Lumi has a split screen view and can run two apps at the same time, it can also screencast to your PC/MAC/Mobile. The Lumi has a front-lit display and glowlight. Max lumi is heavier by 80 grams and 1mm thicker than the Max 3. Max 3 has TWO less pen options in the note taking pallet. The back of the Lumi actually has FCC and a few other cert. stamps that the Max 3 did NOT. There’s no pre-loaded Gallery app on the max 3.

The MAX 3 is lighter, slimmer, easier to hold, it can be opened up, there are screws on the bottom, hardware similar to the Lumi, same battery, same USB-C, same PCB overall. It will likely get the Boox OS 3.0 update sometime soon, giving it most of the new software features of the Lumi. If you have a MAX 3, there is no reason to really upgrade to the Lumi, unless the front-light, faster processor and more RAM is compelling enough.