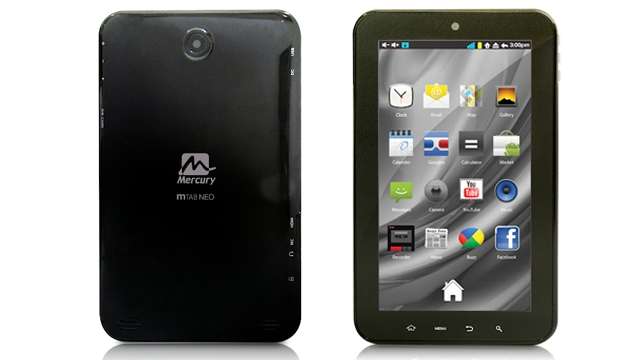 The budget tablet segment in India just got boosted with the introduction of the Mercury mTab Neo from Kobian. The mTab Neo will join its sibling, the Mercury mTab2, which went on sale in India during the last quarter of 2011. The new mTab Neo boasts of 3G capability, which definitely is an improvement over the mTab2, which was only Wi-Fi capable.

Among the other features that marks the new mTab Neo is its 1 GHz Cortex A9 Dual Core CPU, which is a downgrade from the 1.2 Ghz processor that powered the mTab2 tablet. Unfortunately, the mTab Neo is running the Android 2.2 Froyo OS that comes out of the box with the unit and the OS cannot be upgraded anytime later to the very in demand Android 4.0 ICS, which indefinitely traps the mTab Neo in Froyo.

The rest of the tablet specs go like this: a 7 inch capacitive multi-touch screen having a resolution of 480 x 800 pixels (another area which could have been improved), 4 GB internal storage, micro SD card support which can up the storage by another 32 GB, mini-USB port, dual speakers, and dual camera (front 0.3 megapixel and rear 2 megapixel), with a 4000 mAh battery providing the juice. The tablet also comes with a HDMI out port, along with support for Bluetooth 3.0, and EDGE/GPRS. Inclusion of SIM card also brings with it both video and voice calling functionality.

The mTab Neo has been priced at INR. 15,999,and is up against other tablet devices, such as the Reliance 3G Tab, Beetel Magiq II, and HCL Me X1.