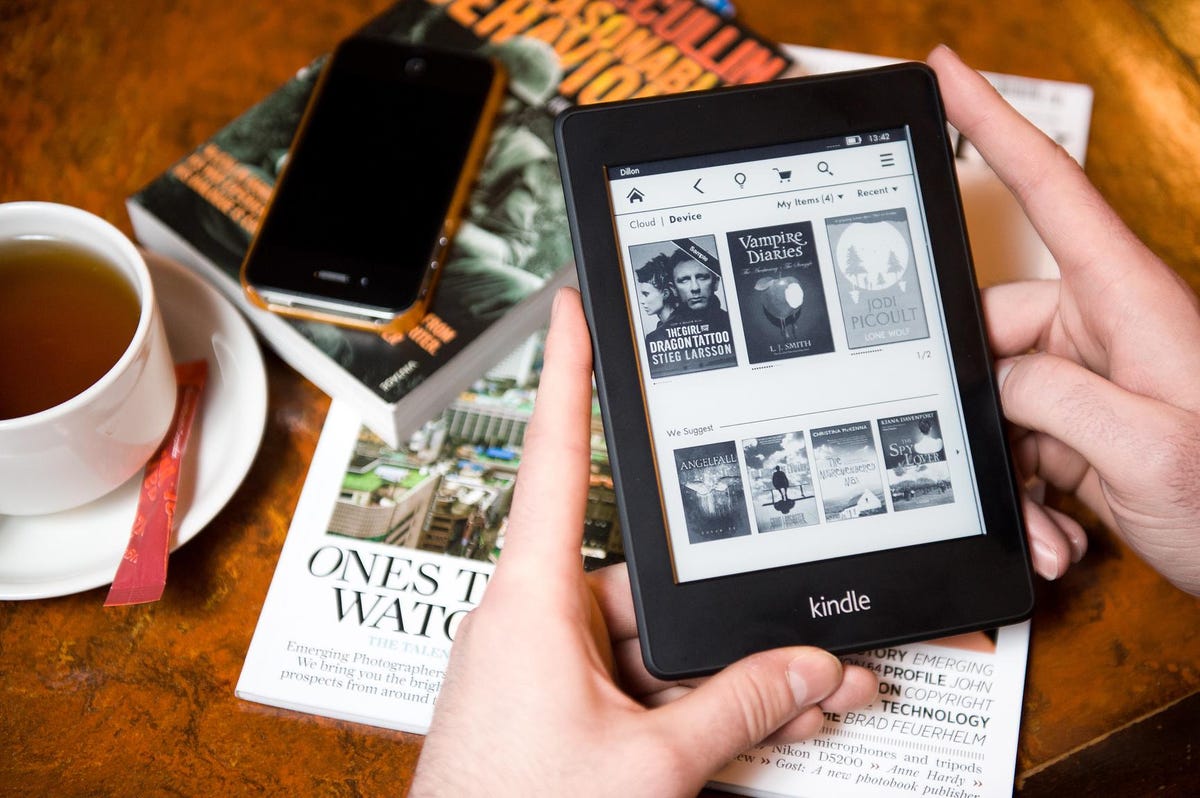 Every single e-reader that is currently on the market are designed and manufactured. The most successful brands such as Amazon, Kobo and Barnes and Noble have design and engineering teams that construct the device and do mockups of how it will look and outsource the manufacturing process to trusted providers. Smaller companies tend to white label existing products or do limited production runs and run crowd funding campaigns. Nobody really knows how the global supply chain for e-readers actually works, and Good e-Reader seeks to give you a firm understanding.

It’s been E INK all along!

The vast majority of e-Readers that are currently being sold and have historically been on the market, at one point or another, have all had E INK displays. E INK is a company based in Taiwan and they have three factories that product the EPD displays. E INK also spends hundreds of million of dollars, spread out over a couple of years on research and development. This has led to modern creations such as the E INK Carta 1200, Carta 1250, E INK Kaleido 1 and Kaleido 2 and alas various prototypes such as a foldable e-Reader. E INK currently operates their largest factory in Yangzhou, eastern China and smaller ones in Taiwan and Hanover in the United States. E INK will basically create the EPD, front-light/color temperature system and touchscreen layer, which includes WACOM. Next, they send the EPD panels and screen related tech to various OEM’s who will take the EPD and source the other components such as the battery, logic board, processor, memory and then assemble it into the chassis.

One of the pitfalls of having one company, with very little competition in the EPD space, is that a supply constraint can affect the entire industry. Pretty well in all of 2021 there has been an EPD shortage, which is why many products are sold out or some aren’t being made at all. The main reason of the EPD shortage is primarily attributed to their factory in Yangzhou, eastern China, which has been impacted by a reoccurrence of coronavirus pandemic. The local government took strict measures to control traffic and people’s mobility, and consequently, production at the factory has decreased a great deal, E INK CEO Johnson Lee noted. In addition to reduced production, many shipments from the factory have been deferred. After the local government lifts the control, E Ink will make the most efforts to hike production and clean deferred shipments. It is not estimated when this is happening, but E INK expects it sometime in November or December, but this is optimistic.

So what is the big deal about one factory in China? This is their largest factory, this is where the vast majority of ALL of their EPD displays are manufactured. Their only other factories are in Linkou Taiwan and S. Hadley in the United States, but they are smaller. At various points in the past few years, E INK has made continued promises to expand their production lines at the factories outside of China, but it has not occurred yet. At a recent earnings report, the CEO stated that E Ink complete the first additional production line by the end of 2021 and the second additional one in 2022, Lee noted. However, E Ink will not expand production capacity for e-paper modules for the time being, but will automate such production lines. The two expansions are not going to be cheap, they will cost around $53 million USD, instead of the expected $35 million USD.

While the cost for components and materials rose continually in the first half of 2021, E Ink has not hiked quotes to reflect increases in cost because E Ink aims to expand the e-paper market. But if such cost further rises in the second half of 2021, E Ink is likely to upward adjust quotes for e-paper modules. This might result in only bigger companies being able to release new products and smaller ones, might not be able to make the added cost work out.

How do e-readers get designed and manufactured?

Amazon is the largest and most successful e-Reader brand in the world, everyone has heard of a Kindle. When people ask what I do for a living and explain about e-readers, mostly everyone has read something about it. In the early days, Amazon executives designed the first generation Kindle and ever since then, their secretive research and development arm, Lab126 has designed every single Kindle since 2011. They spend months or even years developing various Kindle models, creating plastic molds to see what design works or not. Once something has been signed off by the executive team, various engineers take the CAD files and molds to Foxconn, which is one of the largest manufacturing plants in China, they are the ones that make the iPhone.

Kobo is the global number two player in the e-Reader industry and thanks to selling the company to Rakuten, they have been expanding their workforce, hiring tons of coders, engineers and designers. Kobo does the research and development for all Kobo e-readers ever made and creates the design, mockups and CAD files. The actual manufacturing is done at Netronix, which is based in Taiwan. Kobo also designs all of the Tolino e-readers for the German market, this is why all of the modern Tolino devices all look the same as the Kobo variants.

Netronix also does their own in-house designs and creates white labels for trusted partners such as King Jim, Mobiscribe and Readmoo Mooink. Barnes and Noble used to have a research and development studio in Santa Clara, but they scuttled the division in 2014, when they tried to cut down on costs. They have limited say in Nook development, but do contribute designs.

There is a company called Linfiny that is based in Japan, which manufacturers and designs e-readers. This company was a co-branded partnership between E INK and Sony. They basically have their own factory and provide an all-in-one solution for the entire contraction of an e-Reader, they do the designs, assembly and  production. The Sony Digital Paper DPT-RP1, Digital Paper DPT-CP1, QuirkLogic Papyr and Fujitsu Quaderno line were all produced at this location. The way Linfiny works,  is that Sony does the design and E INK runs the production lines.

Onyx Boox is one of the best emerging brands in the world. They used to focus exclusively develop e-readers and e-notes in China, and 4 years ago decided to focus on the international market, which has been the key to their success. All of their executive team is based in China. They create and assemble their own devices and also run their own factory. The company also provides a white label service, for companies that can’t afford to do something from scratch. They used to deal with Icarus, before they went bankrupt, they also have created all of the Storytel readers.

Pocketbook is one of the strongest e-Reader brands and have been in business since 2011. They primarily focus on consumer electronics and have been releasing a couple of new devices, every year. They are not adverse at taking risks and were early adopters of crude color E INK, called Triton. The company designs all of their e-readers in-house, but the actual manufacturing process is done by Jezetek, who is a little-known mobile device subsidiary of a Hong Kong-based electronics firm.  You won’t find any products on their website, but they are a fixture of tradeshows all across Asia. It is unknown if Jezetek is the manufacturer for the Boyue Likebook series and Bookeen, but since the factory scene for E INK devices is very small,  it would make sense.

Bigme is a Chinese company that has created around 3 different digital note taking devices. The actual manufacturing is done by an unknown 3rd party. The company white labels their products for Pinenote, GUOYUE, and the Bookeen Notia.

It is currently unknown if Wisky, Reinkstone, and Topjoy are the same company, since they use similar broken English on all of their websites and some of the same staff work for all three. Reinkstone and Topjoy both charged uses a couple of dollars to secure a unit, before they started Crowdfunding campaigns. I asked all 3 if they were the same company, but they said no. A trusted supplier told me that they are all within a 3 or 4 block radius and they did not have a good feeling about their manufacturing process, because they are small scale.

Supernote burst on the scene a couple of years ago with a series of digital note taking devices and digital stationary, such as unique cases and stylus. The company designs all of their devices themselves, but their first gen and second generation models use the same shell, just different internal components. They have told me that they do all of the RND, and designing themselves and outsource it to an unknown factory in China, where everything is mass produced. Supernote is also a partner of the Digital Stationary Consortium, which includes members such as Wacom, Samsung, iFlytek, E INK, Linfiny, Lamy and a series of others. Likely all of these companies do the manufacturing process at Linfiny/E INK’s Chinese factory.

Remarkable is based in Norway and has only been around for a handful of years. They have experienced tremendous success in North America and in Europe for their first and second generation writing tablets. Remarkable designed the devices and also the cases, stylus in-house and outsourced the manufacturing process to an unknown Chinese factory. It had to be a smaller factory that accepted low MOQ. The Remarkable 2 ran a staggered release campaign, where people would pay for the devices and they would be shipped within 3-4 months of their order. Remarkable would use this money to produce a limited batch run and then ship it those early customers. They did this for about 8-9 months of the release and now have a stable supply.