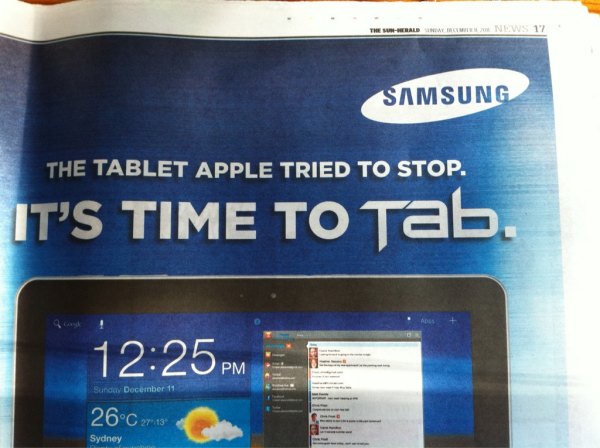 That’s exactly the tagline Samsung is now making good use of in Australia as it attempts to make up for the time lost while it engaged with Apple in the court of law rather than the streets and markets Down Under. The ad appeared in the The Sun Herald newspaper and is clearly a smart move on part of Samsung as the Galaxy Tab 10.1 has already received a world of media attention which otherwise would have cost the South Korean company a lot of money. For this, Samsung has none other than Apple to be grateful to, now that the court has finally allowed Samsung to sell its 10 inch Android tablets in Australia.

“At the end of the day the media awareness certainly made the Galaxy Tab 10.1 a household name compared to probably what it would’ve been based on the investment that we would’ve put into it from a marketing perspective,” said Samsung Australia’s vice president of telecommunications, Tyler McGee.

Samsung has also stated the Galaxy Tab 10.1 that is now being offered again to the Australian consumers is the same device with no changes introduced to clear itself of the court injunction.

“If you look at the specs of the device they’re identical to the global device that’s available out there,” said McGee.

The Samsung executive also stated they are presuming demand to far out strip actual supply and they are doing all they can to meet the surge in requirement.