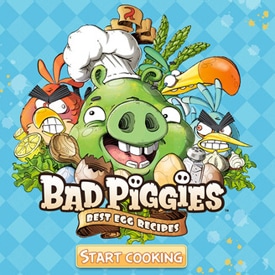 The entire Angry Birds saga has garnered over one billion downloads since it first launched. The company announced a week ago that it was going to show off its new ebook app at the Frankfurt Book Fair, and today Rovio did just that.

The new ebook is called Bad Piggies’ Best Egg Recipes and offers many other enhancements not usually found your standard ebook. Peter Vesterbacka, Angry Birds CMO said that “We wanted to create a cookbook that brings a family together to actively do things together with the characters they all love. It’s fully interactive at every stage.” The app has a built-in photo album, letting users save photos of the dishes they have cooked up. It’s integrated with social media services so users can also share their photos with friends.

There is a print version of this book that launched a while ago, but the digital version has social media elements and lots of Easter Eggs that give you funky little animations and mini-games.