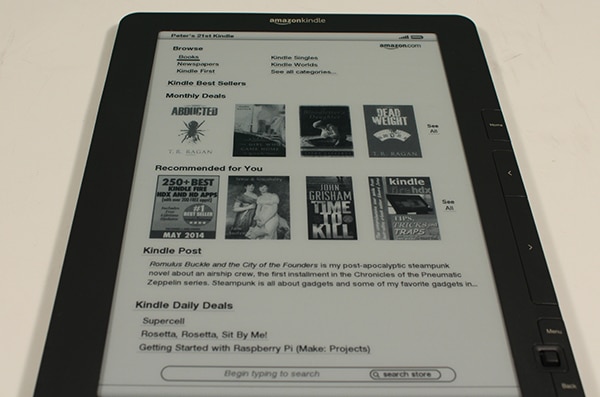 Amazon has been making making e-Readers since 2007 and this year the company is celebrating their ten year anniversary of the Kindle. They have only made one single that is larger than six inches and this was the Kindle DX. This was brought back from the grave on a few different occasions, but it was developed when the vast majority of E-Ink devices did not have a touchscreen. Given that Kobo has seen tremendous success with larger screens and 13.3 inch readers are made by mainstream companies like Sony, should Amazon do a second generation Kindle DX?

The Kindle DX was released in 2009 and they discontinued it a year later when they they issued the Graphite edition. The Amazon Kindle DX Graphite featured a 9.7 inch display screen with 1200 x 824 pixel resolution at 150 ppi, 16-level gray scale, 10:1 contrast ratio. There is a built in gyroscope and accelerometer and switches between landscape and portrait mode automatically. The DX has a paltry 128MB of RAM, therefore it cannot display international fonts, like the Cyrillic, Chinese, or any other non-Latin font and PDF support .

Unlike most modern e-readers this does not have a touchscreen and instead is reliant on physical keys. There are left and right page turn buttons, home and settings menu. The D-Pad functions as your scrolling and navigation utility and clicking it is basically the OK button. One thing that Blackberry and old school users will like is the full QWERTY keyboard.

One of the great things about the DX is the inclusion of text to speech and the two speakers. Amazon, Barnes and Noble, Kobo and Sony have all abandoned audio in their last few generations of e-readers in order to cut down on manufacturing expenses and compete against each other on price alone. The DX was last e-reader from Amazon that had built in audio, and many people who have vision problems flock to this model.

Over the course of the past three years e-Readers have moved beyond the standard six inch e-paper screen and some companies have experienced success.  Kobo has experimented with a series of 6.8 and the new Kobo Aura One has a 7.8 inch screen.  Icarus, Onyx Boox, Sony and a myriad of other companies have all sold a great number of e-readers that range from six to 13.3 inch readers.

Amazon controls 75% of the eBook market in the United States and 95% in the United Kingdom. They have been putting a greater emphasis on integrating Guided View on the Kindle to make reading digital comics more intuitive. They also released the Manga Reader in Japan to test out new firmware that rapidly turns pages and has an entirely new rendering engine. Amazon has proven there is a huge market for Alexa and have not only ported it over to all the other hardware they sell, but also other companies who makes smartphones and televisions.  The fact that there is no large screen Kindle to take advantage of all of these new advances is mind boggling.

I think Amazon could change the game if they released an e-Ink Carta version of the Kindle DX that had speakers, a microphone and a high resolution screen. They could really market it as a digital consumption device that could use Alexa, listen to audiobooks from Audible and read eBooks, comics and manga. Obviously it would cost more, but there would be a strong market for it. Amazon could also generate other revenue by selling a new range of cases and accessories, maybe even offer it as a Travel Bundle. I am sure people would spend $399 for it.